The lure of absurdity

In my last few posts, I've been going through what I think are a few of the most common reasons that people fall for counterfactual nonsense like pseudoscience, crackpot theories, and the various flavors of woo-woo.  And just yesterday, a regular reader and frequent contributor to Skeptophilia sent me a link with the note, "I think this may be a reason for crazy beliefs you haven't considered yet."

His link brought me to a site that described a study by Fiona Hayes-Verhorsihs, a sociologist at Gulf Isthmus University.  And this study, which was about as simple and elegant as any I can imagine, generated results that run completely counter to my hopes that the more rational an idea is, the more likely it is that people will accept it.

Hayes-Verhorsihs has, for six years, been conducting an experiment with the people who use the various kitchenettes scattered in buildings around the Gulf Isthmus campus.  She put notes up on various appliances and in other locations in the kitchenettes -- notes that fell into one of two classes, "sensible" (e.g. "Please place trash in the trash bin") and "absurd" (e.g. "You may only use this fridge on days that have an 's' in them").  She set up video cameras to monitor compliance.  And she found, troublingly, that the absurd notes were far more likely to be obeyed than the sensible ones.

"Please clean the sink after you're done using it," for example, resulted in a compliance rate of between 12% and 21%.  On the other hand, "Pound top of microwave with attached Maglite before using" achieved a compliance rate of 180% -- the higher-than-100% rate being calculated by totaling the number of hits, including people who hit the microwave more than three times.  The microwaves, in fact, were being hit hard enough to break them -- during the course of this bit of the experiment, the microwaves had to be replace at intervals of every two weeks because the dents and cracks were making them unsafe to use.

"At that level of absurdity, compliance seems to shoot through the roof," Hayes-Verhorsihs said. 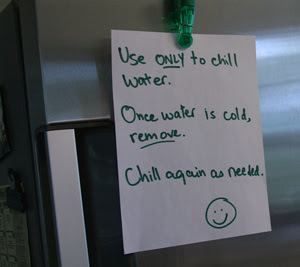 Hayes-Verhorsihs has a guess as to why she got the results she did.  "When an order seems like a good idea or meant to be good for you, it causes resistance," she explained.  "People essentially feel that anyone trying to ‘do good’ must not have real power, and they want to test that authority.  An absurd order, on the other hand, causes people to assume that the authority must have true power, and people obey without thinking."

Of course, the whole thing puts me in mind of the Milgram Experiment, in which the degree of compliance with authority was tested in circumstances where it seemed that such compliance was causing bodily harm to a volunteer.  Milgram's results -- that people basically follow orders, even when they run counter to conventional morals and ethics -- have been used to explain the degree to which ordinary people were willing to participate in Nazi atrocities during World War II.  I like Hayes-Verhorsihs's experiment better, honestly -- although I think her conclusion is just as disheartening as Milgram's was.

And all of this makes me wonder about myself, because instead of triggering compliance, absurd directives immediately make me bristle.  I still remember, for example, when the staff in our school were told via email that we couldn't have coffee makers in our classrooms any more, because they were a fire hazard.

"That is ridiculous," I told a colleague, after making an anatomically-impossible suggestion in the general direction of the individual who had sent the email message, because no one messes around with my access to coffee, at least not if they want to remain alive.  "How many coffee makers have you ever heard of that have spontaneously burst into flame?"

Of course, I did eventually remove my coffee maker, and started bringing thermoses of coffee from home instead.  So maybe I'm not so different, after all.

But it does shed some light on why people believe crazy things, doesn't it?  All of the stuff about the ruins of Atlantis showing up on a Google Earth shot, the Viking gods being alien beings from another planet, the sightings of Nessie and Bigfoot and Sheepsquatch -- maybe people belief this stuff because it is absurd, because they figure anyone making a claim that ridiculous would only do so if they really knew what they were talking about.

All of which is not very encouraging, to a skeptical blogger.  I mean, I'm not going to give up, or anything, because then the anti-coffee-maker cadre wins, and we can't have that.  But it does seem a little overwhelming to consider the number of different reasons why people could be lured into believing an absurdity.

It puts me in mind of the saying from South Africa -- "There are thirty different kinds of lunacy, but only one kind of common sense."
Posted by Gordon Bonnet at 2:12 AM