Thoughts about the Hand of God

I'm going to issue a plea to scientists:

What I am talking about is the use of religious symbolism in names.  First we had poor Leon Lederman, who has lived to regret his choice many times, nicknaming the Higgs boson "the God Particle."  Then we had a bunch of population geneticists, studying human DNA haplogroups, calling the progenitor of the human Y chromosome and mitochondrial DNA, respectively, "Adam and Eve."

Even Einstein fell prey to it -- when he first heard about the quantum probability theories of Erwin Schrödinger, he quipped, "God does not play dice with the universe."

So it's not like it's without precedent.  I'm just asking for it to stop.

All of this comes up because of the following image of an exploding star, recently released by NASA: 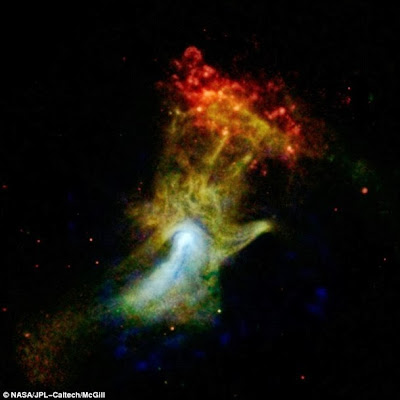 And what are they calling this?

Now, I'm sure that whatever scientist first called it this had tongue planted firmly in his or her cheek.  But the problem is, that's not the way the average American layperson perceives it.  Given that something around 80% of your average American laypeople subscribe to some form of religion, this sort of thing sounds mighty serious to a significant fraction of the public.  And even amongst those who don't believe that this is literally the hand of a deity, it can give rise to overwrought articles like "Beyond NASA Photo, 'Hand of God' Seen Everywhere," in which we are told that science and religion go, um, hand in hand:


This ubiquitous natural wonderland caused man to acknowledge and honor the Creator of creation, as Copernicus did when he wrote, "[The world] has been built for us by the Best and Most Orderly Workman of all."  Or as Galileo wrote, "God is known … by Nature in His works and by doctrine in His revealed word."  Or as Pasteur confessed, "The more I study nature, the more I stand amazed at the work of the Creator."  Or Isaac Newton: "When I look at the solar system, I see the earth at the right distance from the sun to receive the proper amounts of heat and light. This did not happen by chance."

The author goes on to state that even modern scientists admit that there's room for faith:


"Now,” [astronomer Robert] Jastrow continues, "we would like to pursue that inquiry farther back in time, but the barrier to further progress seems insurmountable.  It is not a matter of another year, another decade of work, another measurement, or another theory; at this moment it seems as though science will never be able to raise the curtain on the mystery of creation."

The famed scientist’s ultimate conclusion is astonishingly candid, particularly in light of his own professed agnosticism: "For the scientist who has lived by his faith in the power of reason, the story ends like a bad dream.  He has scaled the mountain of ignorance; he is about to conquer the highest peak; as he pulls himself over the final rock, he is greeted by a band of theologians who have been sitting there for centuries."

Oh, come on.  It's not that I think that religion and science are incompatible, exactly; I know plenty of religious scientists (and quite a few rational, logical religious people).  It's more that all of the historical fuddling about really doesn't mean anything.  Copernicus and Galileo were religious, sure; but Copernicus didn't release the official draft of his manuscript until he was on his deathbed because he was terrified of the Christian powers-that-be (and sure enough, they burned every copy of his book they could get their hands on).  And Galileo had his own struggles with the Vatican, ones that are so well known that they hardly need to be detailed here.  The only reason that Newton and Pasteur didn't run into problems is that by their time, the power of the church had waned some (and what they were proposing didn't bring them into direct conflict with religious dogma in any case).

So the issue isn't that you can't be both religious and scientific; the issue is more that when they come to opposing conclusions, you have to choose one or the other, because they approach knowledge from completely different directions.  I've made the point before, as regular readers undoubtedly know.  So it really isn't relevant that Copernicus, Galileo, Newton, and Pasteur were religious; what is relevant is that when it came to their science, they didn't get it from the bible, nor even some kind of mystical divine revelation, but from rigorous analysis of the evidence.

And as far as Jastrow; seriously?  We scientists are pictured as pulling ourselves along, stumbling blindly uphill, finally reaching the pinnacle of knowledge, and coming across... theologians?  I'm sorry, Dr. Jastrow, but do you really want to compare the list of discoveries, advances in knowledge, and inventions that have helped the human condition that have been produced by science, and those that have been produced by religion?  I know you were talking about some kind of final, teleological understanding of the Big Picture -- but honestly, given their respective track records, I'm betting that if we ever get to the Cosmic Big Answer, it's going to be the scientists who do it, not the theologians.  The theologians will still be too busy arguing over whether god cares about what consenting adults do in their bedrooms.

So, anyway.  Let me say it again: it's hard enough to keep the terms of the discussion clear without the scientists themselves making it worse by giving stuff religiously suggestive names.  I mean, if you really want to go that direction, at least pick a god nobody much believes in any more.  If you'd wanted to call the exploding star The Mighty Fist of Thor, I doubt anyone would have cared, except people who are passionate about Marvel Comics, and honestly, I think they can manage the cognitive dissonance better than the religious people can.