A case of the blues

This post is brought to you by the color blue.

But not to worry: this is not about the damned dress, about which I have heard enough in the past week to last me several lifetimes.  This is about a different viral story, and one that has even less scientific validity than the whole what-color-is-this-dress thing.

I refer to a claim I've seen multiple times in the last few days that claims that because ancient languages had no word for the color blue, that they were unable to see blue.  Or, more accurately, that "blue" didn't exist in their mental and linguistic framework, so they were unable to see the difference between blue and colors that were nearby on the color wheel (especially green).  This, they say, explains Homer's "wine-dark seas," a metaphor I've always thought was as strange as it was evocative.  Kevin Loria, author of the article in question, writes:


In 1858, a scholar named William Gladstone, who later became the Prime Minister of Great Britain, noticed that this wasn't the only strange color description. Though the poet spends page after page describing the intricate details of clothing, armor, weaponry, facial features, animals, and more, his references to color are strange. Iron and sheep are violet, honey is green.

So Gladstone decided to count the color references in the book. And while black is mentioned almost 200 times and white around 100, other colors are rare. Red is mentioned fewer than 15 times, and yellow and green fewer than 10. Gladstone started looking at other ancient Greek texts, and noticed the same thing — there was never anything described as "blue." The word didn't even exist.

It seemed the Greeks lived in murky and muddy world, devoid of color, mostly black and white and metallic, with occasional flashes of red or yellow.

Loria goes on to tell us about the studies of a linguist named Lazarus Geiger, who found that there was also no word for blue in ancient Hebrew, Icelandic, Chinese, and Sanskrit.

There are two problems, of increasing severity, with this hypothesis.

The first is that this is a specific case of what is called the Strong Sapir-Whorf Hypothesis -- that our experience of the world depends on our having a linguistic framework for it, and without that framework, we are unable to conceptualize categories for things.

The Strong Sapir-Whorf Hypothesis has a difficulty -- which is that it doesn't square with what we know about either physiology or language evolution.  In the case of color discrimination, the fact is that in the absence of a physiological impairment (e.g. colorblindness), most people have similar neural responses to observing colored regions.  There are a small number of people, mostly female, who are tetrachromats -- they have four, instead of three, color-sensing pigments in the retinas of their eyes, and have a much better sense of color discrimination than we trichromats do.  But the physiology would argue that mostly we all experience color the same way.

The Strong Sapir-Whorf Hypothesis, apropos of color discrimination, fails on a second level, however; Brent Berlin and Paul Kay found, back in the 1960s, that languages have a very predictable order in which they add color words to their lexicon.  It goes like this:
This agrees with the way our eyes perceive color, in terms of the peaks of cone sensitivity. It is surmised that the greater the necessity to differentiate between different colors -- for example, in determining the difference between poisonous fruits and edible ones in a rain forest -- the greater the complexity of words for different shades and hues.  In the ancient world, understandably enough, you coined words for things that had survival value, and pretty much ignored everything else.

But what about Loria's claim that many ancient languages didn't have words for blue? This brings us to the second problem with the article -- which is that this is simply an untrue statement.

The ancient Greeks had the word κυανός, which means "dark blue" -- specifically the color of the mineral azurite, which was highly prized for jewelry and statuary.  It's the root of our word "cyan."  And the Greeks weren't the only ones; the Hebrews had the word t'chalet, as in Numbers 15:38:


Speak unto the children of Israel, and bid them that they make them fringes in the borders of their garments throughout their generations, and that they put upon the fringe of the borders a ribband of blue.

Even today, the tallit, or Jewish prayer shawl, is always decorated in blue.  (And it is no coincidence that the Israeli flag is blue and white.)

What about Old Icelandic?  They had the word blár, which meant, you guessed, it, "blue."  It's no new innovation, either; it's used in the 10th century Hrana saga hrings (The Saga Cycle of Hrani), in which we have the line, "Sýndi Hrani, hversu hún hafði rifit af honum klæði, og svo var hann víða blár go marinn," meaning, "Hrani showed that she had torn off his clothes, and he was widely blue and bruised."  (What?  It's an Icelandic saga.  You thought it was going to be about bunnies and rainbows?)

And I don't know any Chinese or Sanskrit, but I'd bet they had words for blue, too.  One of the most prized gemstones in the ancient world was lapis lazuli -- and according to an article posted at the website of the Gemological Institute of America:


Historians believe the link between humans and lapis lazuli stretches back more than 6,500 years. The gem was treasured by the ancient civilizations of Mesopotamia, Egypt, China, Greece, and Rome. They valued it for its vivid, exquisite color, and prized it as much as they prized other blue gems like sapphire and turquoise.

Hard to imagine why our distant ancestors would have done this if they saw blue stones as, in Loria's words, "muddy and murky... mostly black and white and metallic, with occasional flashes of red or yellow." 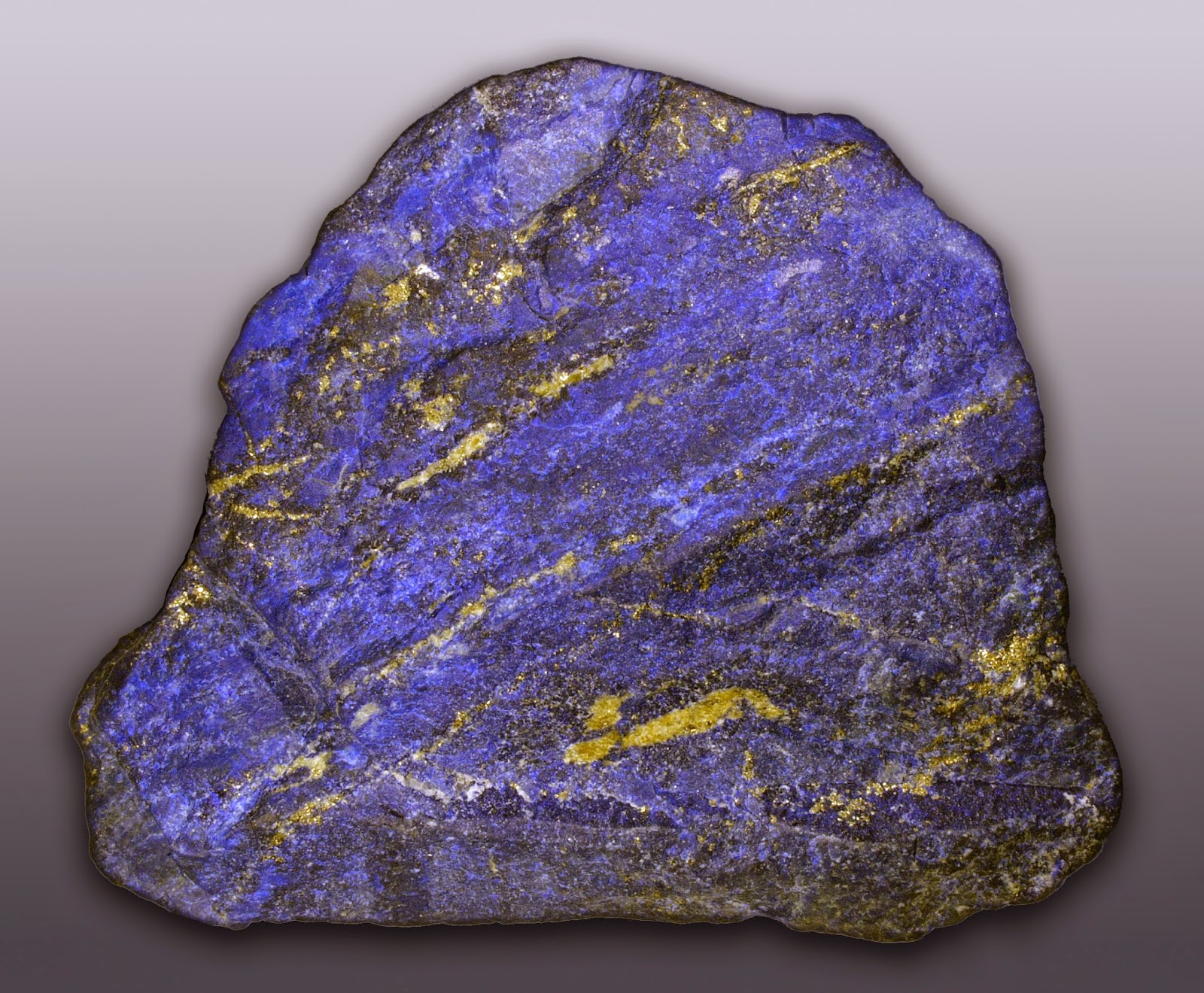 [image courtesy of photographer Hannes Grobe and the Wikimedia Commons]

So the whole premise is false, and it's based on zero biological evidence.  But that hasn't stopped it from being widely circulated, because as we've seen more than once, a curious and entertaining claim gets passed about even if it's entirely baseless.

I'll end here.  I'm feeling rather blue after all of this debunking business, and not gray or metallic at all.  And I suspect I'd feel that way even if I didn't have a word for it.
Posted by Gordon Bonnet at 2:09 AM