Fracking, the EPA, and slanted journalism

It's intensely frustrating to see science misrepresented by news outlets, and people unquestioningly accepting that misrepresentation as fact.  Some copy writer with who-knows-what background in actual science is given the task of summarizing scientific research, and then it's headlined with a catchy phrase that not only doesn't reflect the story accurately but simply reiterates whatever political slant that media corporation has.  Readers then take away from that inaccurate summary whatever they got from it -- sometimes only by reading the headline -- and interpret it via whatever biases they came equipped with.

Any wonder why the average American's knowledge of science is so skewed?

Take, for example, the recent report by the Environmental Protection Agency regarding hydrofracking and its effect on drinking water.  Here's a brief excerpt:


From our assessment, we conclude there are above and below ground mechanisms by which hydraulic fracturing activities have the potential to impact drinking water resources. These mechanisms include water withdrawals in times of, or in areas with, low water availability; spills of hydraulic fracturing fluids and produced water; fracturing directly into underground drinking water resources; below ground migration of liquids and gases; and inadequate treatment and discharge of wastewater.

So far, kind of an equivocal finding.  There has been some well contamination... but it doesn't seem to be very frequent... but it does sometimes happen... but there could be several reasons for that including "inaccessibility of information" -- i.e., the natural gas corporations not releasing said information when contamination happens, or maneuvering the people affected into silence via gag orders.

Understandable, of course, that the EPA wants to keep a low profile these days, considering the number of legislators who would like to see it defunded or dismantled completely.  So it's unsurprising that they're taking a "maybe so, maybe not" approach and trying to fly under the radar.

But that, of course, is not how the media spun the report.  The day the report was released, The Washington Times and The New York Post both had articles headlined, "EPA: Fracking Doesn't Harm Drinking Water."  The Times later amended their headline to read "EPA Finds Fracking Poses No Direct Threat to Drinking Water" after enough people wrote in to say, "Did you people even read the report?"  Which is marginally better but still not reflective of the waffling language in the report itself.  Even Newsweek went that way, with an article headlined, "Fracking Doesn't Pollute Drinking Water, EPA Says."

But lest you think that the conservative, pro-fracking media sources were the only ones who gave the report their own unique spin, the liberal, anti-fracking sources were just as quick to jump in and claim that the report proved that fracking was highly dangerous.  Common Dreams, an online progressive news source, ran it as "EPA Report Finds Fracking Water Pollution, Despite Oil and Gas Industry's Refusal to Provide Key Data."  Nation of Change had the story headlined with, "Long-Awaited EPA Study Says Fracking Pollutes Drinking Water," along with the following photograph: 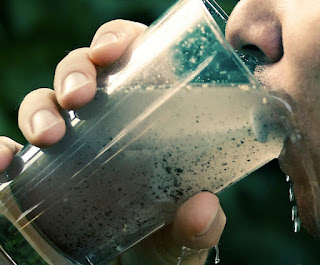 Add to that the fact that what little the EPA's report did say was immediately called into question, in one of those examples of weird synchronicity, by the resignation of Mark Nechodom, director of the California Department of Conservation, the day after the report was released -- over allegations that he had looked the other way while natural gas companies disposed of fracking wastewater by injecting it into central California agricultural and drinking water aquifers.

"Nechodom was named this week in a federal lawsuit filed on behalf of a group of Kern County farmers who allege that [California Governor Jerry] Brown, the oil and gas division and others conspired with oil companies to allow the illegal injections and to create a more lax regulatory environment for energy firms," an article in The Los Angeles Times said.  "Nechodom's resignation was unexpected, although he had increasingly been called upon by state officials to explain problems in the oil and gas division’s oversight of the oil industry and a parade of embarrassing blunders."

Not only that, a criticism levied against the EPA report itself appeared in EcoWatch, claiming that the writers of the report cherry-picked their data to ignore cases of contamination, including 313 documented cases of well contamination in a six-county region in Pennsylvania.  You have to wonder how much damage there'd have to be before the EPA did consider it "widespread."

So once again, we have government agencies waffling and misrepresenting the data, special interests and slanted media obscuring the real situation, and hardly anyone checking their sources, resulting in everyone pretty much thinking what they thought before.

And, of course, doing nothing about the actual problem.

The whole thing makes me want to scream.  Because what we need is responsible media, giving accurate and comprehensive reporting on issues like this -- not more shallow and skewed blurbs that do nothing but muddy the water (as it were).  And we need readers who are willing to follow the first rule of critical thinking -- check your sources.

And we also need government agencies that are willing to bite the bullet and tell people the truth, come-what-may.

And because none of that is likely, what I need is a couple of ibuprofen and another cup of coffee, because all of this depressing stuff has given me a headache.