Here at Skeptophilia we've talked about "Poe's Law" -- the general rule that a sufficiently well-done satire is indistinguishable from the real thing.  Usually, this happens because of the cleverness with which the satire is written -- matching in tone, style, and verbiage the particular slice of crazy that the writer is satirizing. 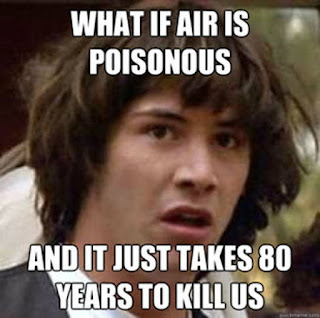 There's another force at work here, too, however.  And that is that the range of nutty things that people actually believe is frightening.  Every time I run into something that seems too completely batshit insane for anyone to take seriously, it always turns out that there is a whole cadre of folks who believe it fervently.  Sometimes there are schools where it's taught as fact.  Sometimes it's been turned into a religion.

I'm not sure where such irrational credulity comes from -- yet another question I've asked here more than once.  But to illustrate this capacity for people to buy into ideas no matter how completely ridiculous they are, I decided to have a little fun today.

Below are ten claims I dug up this morning.  Five of them are from satirical websites, and five are serious -- i.e., there are actually people who think these views are true.  See if you can figure out which are which.
Ready for some answers?
How'd you do?

You know, there's a problem with this whole thing, which is that once something appears in print, there will be people who will believe it.  Look at the fact that HardDawn (the same site that claims that radical atheists are taking over the Illuminati, #3 above) had an article back in 2013 that chemtrails were killing the angels in heaven, and I am still seeing that one posted as real on conspiracy sites.

So the line between satire and belief just keeps getting blurrier and blurrier.  Which should not surprise regular readers of this blog, but is a conclusion that makes me want to take Ockham's Razor and slit my wrists with it.
Posted by Gordon Bonnet at 5:02 AM