There are certain pieces of terrain that are just peculiar.  We tend to give them evocative names, because they are evocative; and this often leads people to attribute their formation to some seriously crazy causes.
Take the Mima Mounds, in Thurston County, Washington. 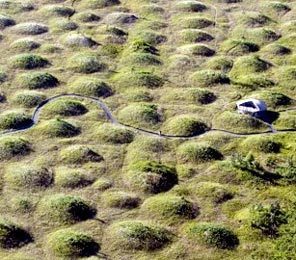 [image courtesy of the Wikimedia Commons]
They're a little creepy-looking, no?  The mounds average about twenty to thirty feet across, and are roughly circular -- and there are hundreds of them.  It's a seriously atmospheric place, conducive to all sorts of woo-woo explanations -- particularly since the geologists themselves aren't certain how they were formed.  And there's nothing like the lack of a scientific explanation to give people license to come up with all sorts of loony claims.  For example, that the Mima Prairie, where the mounds are located, is haunted, presumably by the ghosts of obsessive-compulsive groundhogs.
There are other features which seem too regular to be natural -- take the glacial feature called a cirque, which takes the form of an often perfectly-circular lake: 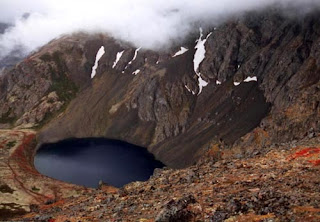 [image courtesy of the Wikimedia Commons]
Cirques form because they are at the origins of glaciers, so experience pressure and consequent erosive forces radiating out from a central point - if the contour of the land will allow it, it results in a nearly perfectly circular depression.
Arches, pinnacles, balancing rocks, channeled scablands... natural forces can result in some amazingly cool, and sometimes bafflingly symmetrical, structures.  No need to conjure up any kind of woo-woo explanation.
Of course, this doesn't mean that humans can't be involved, too.  When I was in Iceland, I visited a place called "Viti."  Viti is a beautiful, circular blue lake, which would have been peaceful had it not been for the jet-engine roar of a steam vent nearby.  The vent was surrounded by a high fence, and had a sign on it, in various languages, which said (as near as I can recall the wording):


Get the hell away from this vent, you stupid tourist.  This vent produces superheated steam, and if for some reason the machinery controlling its release were to fail, you would be cooked by a jet of steam before you could even turn to your wife and say, "Hey, Blanche, come take a picture of me next to this sign!"

The reason for all the caution was, I discovered, because the machinery had failed, about ten years before we went there, and the resulting explosion had thrown a piece of the rigging with such force that it landed a kilometer away.  Apparently the crater left behind by the explosion of the vent machinery was a circular hole in the ground, out of which came water vapor at about 3,000 C.  At that point, Icelandic geologists decided to leave well enough alone, and simply put a diverter over the hole, so that the steam is vented high enough in the air that it won't cook the tourists.
I bring all this up because of an article I ran into recently about the Siberian "death cauldrons."  Speaking of evocative names.  It turns out that there are circular depressions in the ground in many places in Siberia, and legends about those places being "evil," and various stories about people going there and dying horrible deaths.  There is talk of metal debris and mysterious underground bunkers.
What, pray tell, is the cause of all of this mayhem?  We have the following proposals:
1)  It was an area used for nuclear testing during the Soviet era.
2)  They are sinkholes in the tundra, resulting from purely natural phenomena, and all of the associated scary stuff is made up.

3)  It is the pock-marked battlefield left behind when two hostile alien species had an aerial battle in spaceships.
Well.  I know it's hard for me to decide, given the fact that all of these theories are pretty darned persuasive.  The proponents of the alien theory have going for them that the natives of the area claim that they've seen powerful, fire-wielding beings coming from the sky for centuries, and as I was mentioning to Thor just yesterday, you know how accurate the such myths and legends tend to be.  The other thing they point out is that it has to be aliens, because it was right next door in the province of Krasnoyarsk Krai that they had the Tunguska Event, where an alien spacecraft blew up in 1908 and flattened trees radially for miles around.
Well, okay, technically it's only "right next door" if by that phrase you mean "1,500 km away," and almost everyone who's studied the Tunguska Event thinks that it was a small fragment of a comet that hit the Earth.  But still!  Alien spacecraft!  Aerial dogfights!  Crash landings, leaving circular depressions in the ground, and scattered radioactive debris that poisons the landscape and anyone foolish enough to visit!  C'mon, don't you think so?  Don't you?
Okay, maybe not.  But you have to admit that as an explanation, it does have more panache than either "the Soviets blew up some nuclear bombs there, and never cleaned up their mess or even admitted that they'd done it" or "sinkholes sometimes form, and people make shit up."
Posted by Gordon Bonnet at 2:14 AM