New from the "Merciful Heavens, Please Tell Me We're Not Fighting This Nonsense Again" department, officials at the New York State Department of Education are proposing using student scores on AP exams and the SAT test as a means for evaluating teachers and administrators.

How many times does it need to be said?  Standardized test scores are not a measure of teacher effectiveness.  Okay, if I was completely incompetent, my AP Biology students would probably all tank the exam.  But beyond that, my students' scores are far more indicative of their ability to comprehend technical material, their curiosity, and their work ethic than it is of anything I happen to be doing.  I have had years where every single student in my class has gotten a score of 3 or above (usually sufficient to obtain college credit).  Other years, I have not had a single 5 (the highest score) and a commensurately high number of 1s and 2s.  What happened?  Was I competent one year and completely ineffective the next?

Add to that the fact that the College Board, in their infinite wisdom, completely restructured the exam four years ago, and I don't think the scores actually mean much of anything from the standpoint of what I am doing in class.

The SATs are even worse.  I used to teach SAT math prep courses in the evening until I became so frustrated by the "learn how to game the test" approach of most of the curricula we used that I decided to make extra pocket money a different way.  My considered opinion is that your SAT exam score tells you exactly one thing -- how well you did on the SAT test.  A study two years ago found little correlation between SAT score and success in college.  More troubling still is the fact that the one of the strongest correlations of SAT exam scores is with parental income; on average, students from the wealthiest families outperformed the students from the poorest families...

So is the idea here to further penalize teachers and administrators who work in schools in high-poverty areas?  Because that's sure as hell what it sounds like. 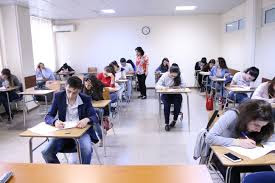 New York State education officials are either unaware of these problems or else are ignoring them.  Ira Schwartz, Assistant Commissioner of Education, said in a memo, "The proposed changes would recognize efforts to encourage student participation and success in college preparation courses."

And unfairly penalize schools and teachers where other factors interfere with student success in these measures.  So Schwartz and Mary Ellen Elia, the State Commissioner, are either being disingenuous or else are once again proposing using standardized test scores as a way of instituting a top-down micromanagement approach that stifles creativity, destroys morale, and virtually eliminates local control.

"In December, the state’s education policymaking body suspended the use of those tests in teacher evaluations for the next four years," wrote Monica Disare in Chalkbeat New York.  "The moratorium is meant to give the education department time to redo the evaluation system.  This announcement, especially the references to SAT, AP, and other exams, offer early signs of how state officials will sort out that task and which new metrics they are exploring."

Also some early signs that what we're looking at is more of the same.  Evidently the Test 'Em Till They Can't See Straight approach, both here and in other states, has not been diminished despite objections from educators and the increasingly powerful opt-out movement.  You have to wonder what would make a difference.  Perhaps when they realize that they're driving experienced teachers from the profession, and discouraging college students from pursuing education as a career.

Or maybe that will just give them the impetus to gut the public school system completely, and replace it with corporate-run for-profit schools designed on the factory model.  Which is increasingly seeming like what they want.
Posted by Gordon Bonnet at 3:58 AM