So the latest alt-med health craze is: high-tech pajamas.

I'm not making this up.  Under Armour has just released a Tom Brady-endorsed line of "Athlete Recovery Sleepwear," which according to the advertisement works as follows:


Far Infrared is a type of energy on the infrared spectrum that has several benefits for the human body.  TB12 technology was developed to harness it even when you’re resting. The soft bioceramic print on the inside of the garment absorbs the body’s natural heat and reflects Far Infrared back to the skin.  This helps your body recover faster, promotes better sleep, reduces inflammation, and regulates cell metabolism.

The main problem with this is that reflecting heat back to your body is what a good blanket will do.  It's entirely possible that ceramic-impregnated cloth does it more efficiently, but I'm not convinced that you're going to get any health benefit out of fancy pjs any more than you would out of a nice down comforter. 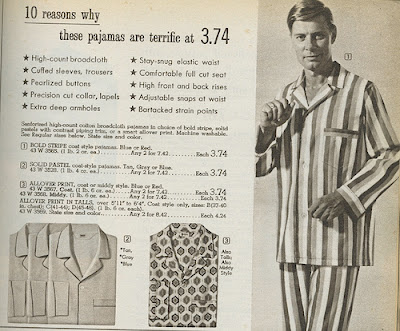 NOT Tom Brady pajamas.  [image courtesy of the Wikimedia Commons]

To be fair, there has been some research on the effects of far infrared on health.  Some of the results were suggestive -- especially those linking far-infrared sauna use with lowered inflammation -- but the main study I've seen cited has a good many woo-ish bits, such as the following:


For FIR used as a therapeutic modality the alternative terms “biogenetic radiation” and “biogenetic rays” have been coined and widely used in the popular literature. FIR wavelength is too long to be perceived by the eyes, however, the body experiences its energy as a gentle radiant heat which can penetrate up to 1.5 inches (almost 4 cm) beneath the skin.  FIR energy is sufficient to exert rotational and vibrational modes of motion in bonds forming the molecules (including the water molecules) as well as resonate with cellular frequencies.

What, exactly, does "resonating with cellular frequencies" mean?

Then there's this site, which is so loony that it falls into the "not even wrong" category.  Here's an excerpt long enough to give you the general gist, but not so long that you'll kill valuable brain cells by reading it:


FIR has vast penetrating and healing powers.  You know that if the Astronauts are taking advantage of the power of Far Infrared by using it in their Space Suits, there has got to be some value to it.  FIR emitting Bio Ceramic mineral compounds are even used to line the inside of their space shuttle to replicate the energy of sunlight.

We're also told that far infrared rays are "unique in that they travel in straight lines" (like all electromagnetic radiation, actually); that they "vibrate at the same frequency as the human body;" that they are "drug-free;" that they "reduce the acidity of the body" and that "a more alkaline body is healthier;" and that they "help heal burns and reduce scaring [sic]."

Well, I don't know about you, but that all sounds pretty convincing to me.

The difficulty of all of this is that the First Law of Thermodynamics, which is strictly enforced in most jurisdictions, indicates that any heat reflection you get from ceramic pajamas is not going to introduce any more energy into your person than the amount you lost to radiation in the first place.  Like I said, if you're cold at night, get a blanket.

I haven't mentioned the fact that the Under Armour Athlete Recovery Sleepwear will set you back $144.98, an expense that could be obviated entirely by doing what I do, which is ditching the pajamas entirely.  That may have been too much information, but it's probably still worth it if I've saved you 145 bucks.

So in summary: there may be some small benefit to wearing Tom Brady's pajamas, but even if the results are not the placebo effect they're unlikely to be anything you couldn't achieve other ways.  The benefits of far-infrared are still pretty dubious, and most of the positive results have been with far-infrared emitters -- like heat lamps and saunas.  If you're looking for a way to sleep better, put your money into a more comfortable mattress instead.  And for cryin' in the sink, don't fall for the whole "resonating with your body's cellular frequency" bullshit.

Although it could be worse.  They could have mentioned "quantum."
Posted by Gordon Bonnet at 2:23 AM