It's been a while since we've heard from the contingent that believes the best way to dose a population with nasty chemicals is to put them into jet fuel, so that the residue coming from the engines would waft about and settle on our unsuspecting heads.  Which, and I must point out at this juncture that amongst other things I write murder mysteries, has always struck me as the worst way to deliver poisons I can think of.  Anyhow, it was with great anticipation that I checked out a link sent to me by a loyal reader of Skeptophilia in which a fellow named David Hodges takes Donald Trump to task for not clearing the skies of chemtrails. 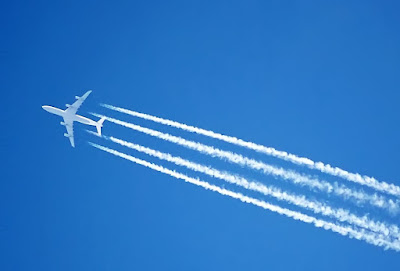 
Donald Trump has made good on a lot of promises.  He's stood up against the free trade agreements.  He's battling to secure our borders against the entry of unknown terrorists into our country.  He's battled the mainstream media with their incessant lies and propaganda.  He's all in all done a really good job.  He's also moving churches away from the 501(c) restrictions against political comment.  I love what he's done in many ways.

But then we hear that there's a big "if" in Hodges's mind:


But President Trump, sir, there is an issue that you're not dealing with, and it's an issue of paramount and critical and immediate importance: it's the issue of chemtrails.  I fully expected by now that the sky over America would be devoid of chemtrails.  You, sir, as the Commander in Chief, have the authority to make this happen.  Read the reports, President Trump.  Barium, chromium, magnesium, aluminum, causing early-onset dementia, Alzheimer's, causing autism in the young, lowering crop yields because it reduces sunlight by as much as 18 to 20 percent, messing with the weather patterns... I could go on, and on, and on.


This is a depopulation movement by the globalists.  Donald Trump has the ability to stop this, at least territorially.  And I cannot believe that he has not ordered the grounding of these transports that lay down these chemtrails.  This is a litmus test, sir, of your administration.  If you care about the American people as you claim, you cannot make this claim with 100% steadfast honesty unless you are willing to stop chemtrails and stop them now.

Oh, and I forgot to tell you the name of Hodges's YouTube channel:  It's called "The Common Sense Show."

I find it wryly amusing that here we have a Trump supporter who is ready to rescind his approval of the new president if he doesn't find a way to get rid of perfectly ordinary jet contrails.  Of course, this really shouldn't be surprising, as this sort of thing seems to be all too common in the folks who voted for Trump.  The whole administration has its support from people who evidently feel like if they click their heels together and wish hard enough, reality will suddenly conform to their wishes -- Jeff Sessions won't have lied under oath about his connection to the Russians, Betsy DeVos will be the best thing ever to reform public schools, Kellyanne Conway will suddenly become capable of telling the truth, and Trump himself will be a good family values Christian instead of a serial adulterer and probable sex offender whose most notable religious accomplishment is embodying all seven Deadly Sins in one individual.

So I thought the whole thing was pretty ridiculous until I started looking at the comments section, and yes, I know that no one should do that because it's simultaneously risking valuable brain cells and also whatever shreds of confidence remain that the human race is salvageable.  But I did it anyway, against my better judgment, and here's a sampling of what I found:

No, you moron, those are called "clouds."

What has me worried is that someone will actually get President Trump alarmed about this, and he'll start trying to do something about it, which will mean he'll propose making some kind of damnfool changes to the rules surrounding airplanes, despite the fact that he clearly knows nothing about them.  Look what happened when he got wind of the whole vaccine/autism nonsense; he jumped right on the bandwagon and now is blathering on about creating a commission to make sure vaccines are safe (there's already such a commission, and in fact it's been around since 1987).  Worse still, in the last months he's met with noted anti-vaxxers Andrew Wakefield and Robert F. Kennedy, Jr., and seems to be turning a deaf ear to the thousands of doctors and medical researchers who have written to him explaining that there is no connection between vaccines and autism.

So I'm perhaps to be pardoned for having very little confidence that Donald Trump will take the scientific stance on "chemtrails," namely, that they're water vapor.  Of course, I have to admit that it might be entertaining to see what he'd propose doing about them.  Maybe build a wall around every airport.  Or, in an analogous move to all of his other appointments to key government posts, just hire someone who knows absolutely nothing about airplane engines to Make Jets Great Again and call it done.
Posted by Gordon Bonnet at 2:57 AM