In your right mind

Another peculiarity of the human brain is lateralization, which is the tendency of the brain to have a dominant side.  It's most clearly reflected in hand dominance; because of the cross-wiring of the brain, people who are right-handed have a tendency to be left brain dominant, and vice versa.  (There's more to it than that, as some people who are right handed are, for example, left eye dominant, but handedness is the most familiar manifestation of brain lateralization.)

It bears mention at this juncture that the common folk wisdom that brain lateralization has an influence on your personality -- that, for instance, left brain dominant people are sequential, mathematical, and logical, and right brain dominant people are creative, artistic, and holistic -- is complete nonsense.  That myth has been around for a long while, and has been roundly debunked, but still persists for some reason.

I first was introduced to the concept of brain dominance when I was in eighth grade.  I was having some difficulty reading, and my English teacher, Mrs. Gates, told me she thought I was mixed-brain dominant -- that I didn't have a strongly lateralized brain -- and that this often lead to processing disorders like dyslexia.  (She was right, but they still don't know why that connection exists.)  It made sense.  When I was in kindergarten, I switched back and forth between writing with my right and left hand about five times until my teacher got fed up and told me to simmer down and pick one.  I picked my right hand, and have stuck with it ever since, but I still have a lot of lefty characteristics.  I tend to pick up a drinking glass with my left hand, and I'm strongly left eye dominant, for example.

Anyhow, Mrs. Gates identified my mixed-brainness, and the outcome apropos of my reading facility, but she also told me that there was one thing that mixed-brain people can learn faster than anyone else.  Because of our nearly-equal control from both sides of the brain, we can do a cool thing, which Mrs. Gates taught me and I learned in fifteen seconds flat.  I can write, in cursive, forward with my right hand while I'm writing the same thing backwards with my left.  (Because it's me, they're both pretty illegible, but it's still kind of a fun party trick.) 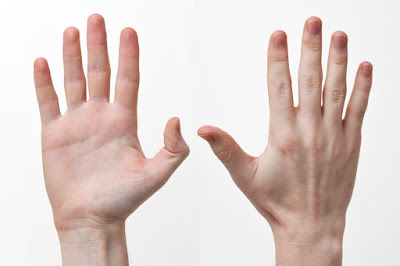 Fast forward to today.  Some recent research has begun to elucidate the evolutionary reasons behind lateralization.  It's been known for years that lots of animals are lateralized, so it stands to reason that it must confer some kind of evolutionary advantage, but what that might be was unclear... until now.

Research by a team led by Onur Güntürkün, of the Institute of Cognitive Neuroscience at Ruhr-University Bochum, in Germany, has looked at lateralization in animals from cockatoos to zebra fish to humans, and has described the possible evolutionary rationale for having a dominant side of the brain.

"What you do with your hands is a miracle of biological evolution," Güntürkün says.  "We are the master of our hands, and by funneling this training to one hemisphere of our brains, we can become more proficient at that kind of dexterity.  Natural selection likely provided an advantage that resulted in a proportion of the population -- about 10% -- favoring the opposite hand. The thing that connects the two is parallel processing, which enables us to do two things that use different parts of the brain at the same time."

Additionally, Güntürkün says, our perceptual systems have also evolved that kind of division of labor.  Both left and right brain have visual recognition centers, but in humans the one on the right side is more devoted to image recognition, and the one on the left to word and symbol recognition.  And this is apparently a very old evolutionary innovation, long predating our use of language; even pigeons have a split perceptual function between the two sides of the brain (and therefore between their eyes).  They tend to tilt their heads so their left eye is scanning the ground for food while their right one scans the sky for predators.

So what might seem to be a bad idea -- ceding more control to one side of the brain than the other, making one hand more nimble than the other --turns out to have a distinct advantage.  And if you'll indulge me in a little bit of linguistics geekery, for good measure, even our word "dexterous" reflects this phenomenon.  "Dexter" is Latin for "right," and reflects the commonness of right-handers, who were considered to be more skillful.  (And when you find out that the Latin word for "left" is "sinister," you get a rather unfortunate lens into attitudes toward southpaws.)

Anyhow, there you have it; another interesting feature of our brain physiology explained, and one that has a lot of potential for increasing our understanding of neural development.  "Studying asymmetry can provide the most basic blueprints for how the brain is organized," Güntürkün says.  "It gives us an unprecedented window into the wiring of the early, developing brain that ultimately determines the fate of the adult brain.  Because asymmetry is not limited to human brains, a number of animal models have emerged that can help unravel both the genetic and epigenetic foundations for the phenomenon of lateralization."
Posted by Gordon Bonnet at 1:59 AM