You are a magnet, and I am steel

Yesterday one of my Critical Thinking students brought to my attention one Miroslaw Magola, the Polish man who claims that metal objects spontaneously stick to his body.

Magola attributes this phenomenon to psychokinesis and his ability to "load his body with energy;" others have tried to explain it by saying that he is able to "concentrate and focus a magnetic field."

Upon doing a bit of research, I found that Magola is not alone in making such claims.  There's also Liew Thow Lin of Malaysia, who not only says that metal objects stick to his body (and there are photos on the website showing him, lo, with metal objects stuck to his body) but that it's evidently genetic, because his son has the same ability.

All of this makes me wonder how these men would manage to walk through, for example, the kitchenware section of an Ikea.  You'd think that they would become the center of a whirlwind of flying kitchen implements, rather like when Wile E. Coyote tried to catch the Road Runner with an Acme Giant Magnet, and would end up with paring knives and cheese graters and vegetable peelers protruding from their bodies. 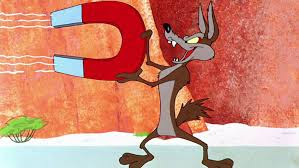 James Randi, the venerable debunker of all things psychic, has investigated Magola, and apparently put paid to his animal magnetism by the simple expedient of sprinkling talcum powder on the metal object he was trying to adhere himself to.   After such a treatment, his power mysteriously vanished. Randi has stated that his conclusion is that Magola either is making use of the natural stickiness of skin oils, or (more likely) has coated his skin with a thin layer of adhesive.

You'd think that'd be case closed, but some people are not to be discouraged by a simple thing like a controlled experiment.  Magola, apparently undaunted by his failure, responded by making a YouTube video "debunking Randi," in which he is shown, sitting in front of a variety of metal objects, and he sprinkles talcum powder on one, and proceeds to make it stick to his hand.

Well, that's all well and good, but I find myself highly suspicious when an alleged psychic can't demonstrate his/her powers under controlled conditions -- it fails in Randi's lab, but when he's by himself, his ability miraculously reappears.  I'm reminded of the dreadfully uncomfortable experience of watching Uri Geller having his clocks cleaned on the Johnny Carson Show -- Geller, the Israeli psychic spoon-bender, couldn't so much as bend a piece of Reynolds Wrap when he wasn't allowed to provide his own props.  He attributed his failure to "the atmosphere of suspicion and pressure" that Carson had created, and followed it up by saying that he "wasn't feeling strong tonight."  That didn't wash with Carson (who had spent time as a professional magician, and knew how easy it was to bamboozle people), and it doesn't wash with me, either -- not in Geller's case, and not in Magola's.  I don't know about you, but I think it's a little puzzling that Magola can only do his funny stuff on his own terms.

All of this brings up one of my biggest criticisms of psychics of all stripes; the fact that they explain away their failures by blaming the skeptics.  "Your disbelief is interfering with the phenomenon," is something you hear all too often from Camp Woo-Woo.  My question is, "why would it?"  If whatever psychic phenomenon you pick -- let's say, telekinesis, since that's what Magola, Lin, and Geller all claimed they could do -- only works when no one suspicious is present, then all I can say is, that's mighty convenient.   It reminds me of the character of Invisible Boy on the movie Mystery Men who is capable of becoming invisible, but only when no one is looking.

And, of course, I always am looking for a mechanism.  If you think you're magnetic, I want you to explain to me how it works without resorting to jargon-laden bullshit like "focusing the frequency of psychic energy fields."  If you say you can move objects with your mind, I want you to do it while undergoing a brain scan, and see what's happening in your brain that the rest of us slobs don't seem to be able to manage to get ours to do.

I find myself in complete agreement with a character from a book by, of all people, C. S. Lewis.  His skeptical scientist MacPhee, in That Hideous Strength, says, "If anything wants Andrew MacPhee to believe in its existence, I'll be obliged if it will present itself in full daylight, with a sufficient number of witnesses present, and not get shy if you hold up a camera or a thermometer."

To which I can only say; amen.
Posted by Gordon Bonnet at 2:15 AM