Once again, famed medical professional Gwyneth Paltrow is promoting the latest be-all-and-end-all for your health, to wit: "Body Vibes stickers."

These are silver-dollar-sized stickers that you stick on your body to "rebalance the energy frequency in your body."  Whatever the fuck that means.  But the pseudoscience technobabble doesn't end there:


The concept: Human bodies operate at an ideal energetic frequency, but everyday stresses and anxiety can throw off our internal balance, depleting our energy reserves and weakening our immune systems.  Body Vibes stickers come pre-programmed to an ideal frequency, allowing them to target imbalances.  While you’re wearing them—close to your heart, on your left shoulder or arm—they’ll fill in the deficiencies in your reserves, creating a calming effect, smoothing out both physical tension and anxiety.  The founders, both aestheticians, also say they help clear skin by reducing inflammation and boosting cell turnover.

The stickers, Paltrow tells us, are made of "the same conductive carbon material NASA uses to line space suits so they can monitor an astronaut’s vitals."  But herein lies the problem.  Because once you make an easily-verified statement -- i.e., veer away from vague, hand-waving bullshit about imbalanced energy frequencies -- you've kind of sealed your own fate.

And it didn't take long for NASA to respond.

Mark Shelhamer, former chief scientist in NASA's human research division, was unequivocal.  "Wow," Shelhamer said.  "What a load of BS this is...  Astronauts do not have any conductive carbon material lining the spacesuits.  Not only is the whole premise snake oil, the logic doesn’t even hold up.  If they promote healing, why do they leave marks on the skin when they are removed?"

This, of course, has exactly zero impact on the alt-med crowd, who absolutely hate it when people bring up pesky stuff like "facts" and "science" and "peer review."  Richard Eaton, founder of AlphaBioCentrix, which developed the stickers, was undeterred by NASA's skepticism.  "Without going into a long explanation about the research and development of this technology, it comes down to this," Eaton said.  "I found a way to tap into the human body’s bio-frequency, which the body is receptive to outside energy signatures.  Most of the research that has been collected is confidential and is held as company private information."

Oh, no, please, Mr. Eaton.  Do give me your long explanation of the research and development.  Define such terms as "bio-frequency" and "energy signatures" using scientifically valid language.  Show me how you can "pre-program" a fucking sticker to "target imbalances."  Give me some well-controlled research showing that the things actually work through something more than the placebo effect.

Until then, don't pretend that what you're hawking is anything more than a convenient way to make money from the gullible and ignorant.

Speaking of which, did I mention that "Body Vibes" stickers cost $120 per pack of 24? 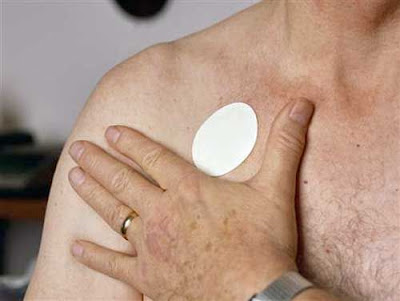 Just as a contrast, let's look at some actual science having to do with stuff you stick on your body, which coincidentally just appeared over at New Scientist yesterday.  Joseph Wang, of the University of California-San Diego, has just published research on a new technology -- a small, flexible square that you can stick on your skin, and which will generate enough power to run a mobile device, using chemicals from your sweat.

It's a biofuel cell -- a power-generating device that runs on organic chemicals broken down by enzymes in the material.  Mirella DiLorenzo, of the University of Bath, was impressed by Wang's creation.  "The most exciting application is wearable sensors that can monitor health conditions, then sweat could generate enough power for a Bluetooth connection so that the results could be read straight from a smartphone," DiLorenzo said.  "This is an amazing proof-of-concept work.  The applications will come quickly in the near future."

Those applications could include monitoring an athlete's performance by tracking lactate levels in the sweat -- which is an indication of how hard the muscles are working.

See the difference, here?  We have, on the one hand, Paltrow and Eaton babbling about quantum bio-energetic frequency vibrations as if anything they said made sense; and on the other, Wang and DiLorenzo talking about actual experimental science, producing a measurable and replicable effect, and based on a solid understanding of biochemistry.

The problem is that actual research just isn't as sexy as alt-med, which can claim any damn thing it wants without the need for verification.  You want to claim that smearing peanut butter on your face will cure your anxiety by resynchronizing your chakras and changing the color of your aura?  No problem!  No one can challenge you, because what you're claiming is that a useless remedy will fix something that almost certainly doesn't exist, which even if it does, is apparently invisible for some reason to every piece of scientific equipment available.  I.e., you're making an inherently unverifiable statement.

But I wish more people would turn to the actual science when they have questions, rather than unscientific charlatans like Gwyneth Paltrow.  Because not only are the victims of these scams wasting their money, they're not seeking effective care for actual medical conditions.

And that crosses the line from just being a bunch of harmless bullshit to being truly dangerous.
Posted by Gordon Bonnet at 2:39 AM