A couple of days ago, NPR ran a piece about conservatives who are leaving liberal areas so they can live amongst like-minded folks.  The article, by Vanessa Romo, is entitled "Texas Becoming a Magnet for Conservatives Fleeing Liberal States Like California," and tells the story of people like 36-year-old Tim Stokes, who is upping stakes and moving along with his pregnant wife and three children.

The reason, Stokes said, is that he is tired of "feeling like an outsider" in his hometown.  He's a Republican, has staunchly supported conservative causes, and has the sense of being marginalized in a community that is largely liberal Democrat.  And he's not alone; the article projects that by 2050, twenty million people will have left their home states to be in places that align better with their political stances and religious beliefs.

It's not that I don't understand this.  I tend to have a liberal bent (which, I'm sure, will come as no shock to regular readers of Skeptophilia), although I try to avoid politics when I can because I find arguing about it to be rather pointless.  I live in an area where liberals outnumber conservatives, although if you continue down the highway where I live toward the south and the city of Watkins Glen, the numbers flip completely.  During the last election, if you took the road past my house, you could see the blue Clinton signs thinning as the red Trump signs increased in numbers, mile after passing mile.

I get that it's nice to have like-minded folks near you.  Believe me, being a liberal atheist from southern Louisiana, I know what it's like to feel like you're on the fringe in your own home, and the situation must feel similar for conservatives in strongly liberal areas.

But I think what Tim Stokes and his family (and, apparently, a great many other people) are doing is unequivocally a bad idea.

We need to be around people who disagree with us, who challenge and question us.  I'm not saying we should seek out hostile interactions, or (worse) provoke them; but I contend that if you live in the contented, self-satisfied little bubble of only hearing the opinions you already have reflected back at you, you will never have the opportunity to suss out places where your thinking is wrong-headed -- or things that you haven't thought about at all.

Fortunately, there are influential people who are saying exactly this.  George Fuller, the (conservative) mayor of McKinney, Texas (near Dallas), said of what Stokes and others are doing, "I think instead of just trying to kind of put together pockets of the like-minded, I would think energy is better spent trying to figure out how to live and exist together and find productive solutions going forward versus insulating yourself from different thoughts and ideologies." 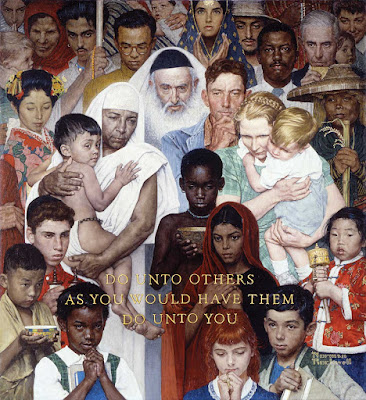 Which is it exactly.  If there's one thing I've found to be consistently true, it's that it's much easier to demonize someone if you have no personal contact with them.  Over and over, I've seen stories of the devoutly religious who hated LGBT individuals -- until a child or a friend came out to them.  They're forced into realizing that the labels and the hatred allow them to ignore the humanity of an entire group, and that they're being presented with a choice between love and narrow-minded bigotry.  (I realize those situations don't always end this way, and there are cases where the bigoted choose to embrace their prejudice instead; but it's encouraging the number of times it's gone the other way.)

In fact, prejudices of all kinds evaporate when you take the time to get to know people different than you are, and realize that your commonalities far outweigh your differences.  And if you segregate yourself voluntarily into a little echo chamber where everyone looks like you, votes like you, and attends the same church as you, you'll never have the chance to do what Kathryn Schulz calls "moving outside of that tiny, terrified little bubble of having to be right about everything."

In fact, I'll go a step beyond that; you should not only be accepting of opportunities to interact with people who aren't like you, you should seek them out.  The leaders of our country are, by and large, accelerating the polarization of the American people, pushing us into believing that anyone who isn't like you is either a hopeless idiot, or else an evil creature dead-set on destroying the very fabric of the United States.

We have to work tirelessly against this mindset.  And, for cryin' in the sink, don't you think we'd get it by now?  We're a nation that in the past has prided itself on being a "melting pot."  I'm a good example; I have in my ancestry recent immigrants from the southeast of France, Jewish refugees from Alsace, Cajuns exiled from Nova Scotia, Dutch settlers who came to New Amsterdam in the 1600s, and Scottish peasants who ended up in the hill country of southwestern Pennsylvania.  Virtually all of us are the product of such amalgams.  And yet, the way things are going, we're rapidly heading toward a society where we not only don't interact with people who aren't like us, we almost never see them.

So do yourself a favor.  Find some people of different ethnicity, religion, sexual orientation, age, or political values, and sit down with them to have a conversation over your favorite libation.  Don't just talk; listen.  Chances are good that you'll find out that this person, so different than you are, just wants the same things you want; a secure home, food on the table, a safe environment to raise children, the freedom to speak without judgment, the freedom to be who they are without fear of censure, ridicule, or violence.

And who knows?  Maybe you'll come away not only having learned something, but having made a friend.
Posted by Gordon Bonnet at 3:17 AM