Messages to the stars

Much has been made of the fact that our television and radio signals are expanding outward from the Earth at the speed of light, so the first things that alien civilizations might see from us are 50s music and bad television shows.  The most memorable example of this is the brilliant and absolutely hysterical movie Galaxy Quest, in which the aliens not only intercepted our television signals, but thought they were documenting historical facts.  It led to the following exchange:


Gwen DeMarco (played to the hilt by Sigourney Weaver):  "They're not all historical documents.  I mean, surely you don't think that Gilligan's Island...

The truth is, any alien civilization who intercepted our signals would have to have their radio telescopes pointed exactly in the right direction, and because of the inverse-square law (the intensity of a pulse of electromagnetic radiation decreases proportionally to the square of the distance covered) the telescopes would have to be mighty powerful, if they had any hope to keep up with the antics of Gilligan and the Skipper.  The immense distances to even the nearest stars are a nearly insurmountable obstacle to any alien hunters -- or, worse, anyone who dreams of voyaging there.

It's different, however, if you are sending a specific message to a specific star, which is what a group called Sónar did last month.  Last Thursday, a spokesperson for Sónar revealed that they beamed a binary message containing scientific and technical information about us, and 33 short musical compositions, directly toward Luyten's Star (also called GJ273), a red dwarf with a planet circling it that is thought to be in the habitable zone.  So if anyone's living there, in a little over twelve years, they'll get our signal -- and twelve years after that, we might get a response.

As exciting as this is, there are a couple of problems with this venture.  The first is that the planet in the habitable zone, GJ273b, orbits its star in only eighteen days -- meaning that it is very likely to be tidally locked (the same side of the planet faces the star during its entire revolution).  In my mind, this significantly decreases the likelihood of there being complex life, as the light side would be too hot and the dark side too cold for water to be in its liquid state.  (It does bring up a possibility that life could exist in the crescent-shaped slivers on either side of the planet that are in constant twilight -- something that would make for an interesting set of problems to investigate in a science fiction story.)

The other issue has more to do with safety than feasibility.  No less a mind than Stephen Hawking has advised against our advertising our presence to alien species, out of pure self-preservation.  "One day, we might receive a signal from a planet like [Gliese 832c, another candidate for hosting life]," Hawking said.  "But we should be wary of answering back.  Meeting an advanced civilization could be like Native Americans encountering Columbus.  That didn't turn out so well."

Any civilization capable of going to the stars, Hawking said, would be so far ahead of us that they would probably consider us hardly sentient at all -- like a human views the ants in an anthill.

Humorist Dave Barry didn't even like Carl Sagan's idea of sending a plaque with information about Earth out on the spacecraft Pioneer 10. 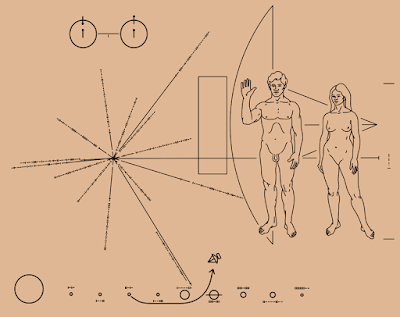 As he wrote in his wonderful book Bad Habits:


(W)hen they decided to send up Pioneer 10, Carl sold the government on the idea that we should attach a plaque to it, so that if the aliens found it they'd be able to locate the Earth.   This is easily the stupidest idea a scientific genius ever sold to the government...  (I)t's all well and good for Carl Sagan to talk about how neat it would be to get in touch with the aliens, but I bet he'd change his mind pronto if they actually started oozing under his front door.  I bet he'd be whapping at them with his golf clubs just like the rest of us.

In fact, he even thought the choice of the art work on the plaque was ill-advised:


(The plaque) features drawings of... a hydrogen atom and naked people.  To represent the entire Earth!  This is crazy.  Walk the streets of any town on the planet, and the two things you will almost never see are hydrogen atoms and naked people.  Plus, the man on the plaque is clearly deranged.  He's cheerfully waving his arm as if to say, "Hi!  Look at me!  I'm naked as a jaybird!"  The woman is not waving, because she's clearly embarrassed.  She wishes she'd never let the man talk her into posing naked for this plaque.

I'm of two minds about all this.  It has long been my deepest wish to live to see the day that we have unequivocal proof of intelligent life elsewhere in the universe.  (The behavior of my fellow humans in the last year has called into question whether we even have intelligent life down here, but that's beside the point.)  On the other hand, attracting the Borg to come in and assimilate the whole lot of us isn't all that appealing.

The good news is that even if there is intelligent life on the second planet of Luyten's Star, it'll be 25 years or so before we could even potentially hear from them, and unless they have access to warp drive or wormholes, it would take orders of magnitude longer for them to get here.  So I'm not losing any sleep over Sónar's message.

I have to admit that sending some music and scientific stuff is a pretty good choice for an introduction, however.  Otherwise, they'd be judging us as a species based on Fibber McGee and Molly and The Beverly Hillbillies, and heaven knows we wouldn't want that.  Eventually they'd get to The Gong Show and Lifestyles of the Rich and Famous and Real Housewives of New Jersey, and at that point the aliens would probably just target us with their photon torpedoes and be done with it.
Posted by Gordon Bonnet at 2:08 AM