Because I am totally disheartened by the news, frustrated by the lack of critical thinking everywhere I look, and also because my blender exploded when I was making breakfast this morning and splattered orange juice and half-processed fruit over every square inch of the kitchen including myself, I am retreating to my happy place, namely: cool stuff in science news.

Let's start with a story from astronomy about something that is a near-obsession with me; the possibility of life on other planets.  This particular research involves the star system TRAPPIST-1, discovered last year and found to have not one, not two, but seven planets, three of which are in the so-called "Goldilocks Zone" (where the temperature is juuuuust right for water to be in liquid form).  Of course, that doesn't guarantee that water's there, just that if it was, it would be liquid, which scientists surmise would be a pretty good indicator of the likelihood of the probability of hosting life.

Now, researchers have found that all of the TRAPPIST-1 planets do have water -- in some cases, up to five percent of their mass.  So the three in the habitable zone might well be water-worlds.  All of which reminds me of the planet Kamino from The Phantom Menace, which otherwise was a dreadful movie, but I have to admit reluctantly that this part was cool.

Here's what we know about the TRAPPIST-1 system, although keep in mind that the illustrations of the planets are artists' renditions of what they might look like: 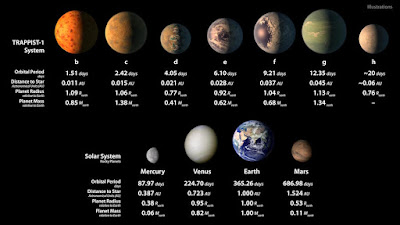 So that's pretty wicked cool.  The difficulty, of course, is that even if they did host life, it'd be hard to see that if the inhabitants had not advanced technologically to the point that they were sending out signals.  But even that hurdle might not be insurmountable -- as I wrote in a post a couple of weeks ago, astronomers are now trying to figure out if life is present on an exoplanet by the composition of its atmosphere.

Then, from the realm of biology, we have a study elucidating how those tiny jet fighters of the avian world -- hummingbirds -- maneuver as well as they do.

A group led by Roslyn Dakin and Paolo Segre of the Smithsonian Conservation Biology Institute of Ottawa examined hundreds of hours of high-speed video of hummingbirds in flight, looking at twenty-five different species and examining how they do their amazing aerobatics, including pivoting while in flight, hovering, and moving in an arc so narrow that it almost defies belief.

The research took them to remote places in Panama, Costa Rica, and my favorite country of Ecuador -- the tiny nation that is host to 250 different species of hummingbirds, including the preternaturally beautiful Violet-tailed Sylph (Aglaiocercus coelestis): 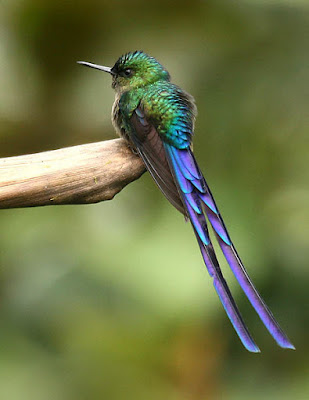 Where I live, we have a paltry one species, albeit a beautiful one -- the Ruby-throated Hummingbird.  So it's no wonder the researchers decided to head south.

Another hummingbird researcher, Christopher Clark of the University of California-Riverside, has said that the new study is like moving from analyzing individual gestures of a ballerina to looking at how the moves fit together.  "Now," Clark says, "we're putting together the entire dance."

Last, some scientists at the University of Zurich have for the first time been able to see new neurons being formed in the brains of embryonic mice.

Starting out by tagging 63 neural stem cells in the hippocampus, Sebastian Jessberger and his team were able to watch as the neurons grew outward and formed connections (synapses) with neighboring neurons.  What was most intriguing was that some of the new neurons had short lives -- perhaps acting as scaffolding for the developing brain and then self-destructing (undergoing apoptosis) when their task was complete. 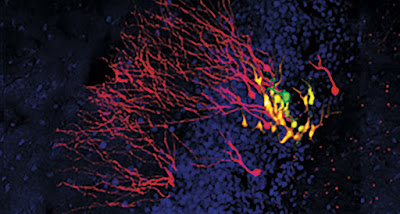 Amongst these tagged cells, the red ones are the newest, orange next, and continuing through yellow and green (the oldest cells).

What is most exciting about this is that being mammals, it's expected that the knitting together of the embryonic human brain probably proceeds in a very similar fashion.  So what Jessberger et al. are doing might well inform us regarding how our own neural systems form.

So there you have it -- three cool new developments in the world of science.  Which has cheered me up considerably.  That's a good thing, considering the fact that now I have to go clean my kitchen, which I'm definitely not looking forward to.
Posted by Gordon Bonnet at 2:52 AM