Every once in a while I'll run across something that is such an elegant support for the theory of evolution that I can't help but wonder how you'd explain it otherwise.

Of course, the evidence for evolution is overwhelming anyhow, and the people who disbelieve it are evaluating the world through a different lens.  But still, I'd like to know how a strict creationist would respond to a beautiful piece of research out of the University of California - Berkeley that was just published last week.

Entitled "Chitinase Genes (CHIAs) Provide Genomic Footprints of a Post-Cretaceous Dietary Radiation in Placental Mammals," the paper, by Christopher A. Emerling, Frédéric Delsuc, and
Michael W. Nachman, at first seems as if it would be of interest only to someone who's keen on population genetics or paleontology.  The authors write:


The end-Cretaceous extinction led to a massive faunal turnover, with placental mammals radiating in the wake of nonavian dinosaurs.  Fossils indicate that Cretaceous stem placentals were generally insectivorous, whereas their earliest Cenozoic descendants occupied a variety of dietary niches.  It is hypothesized that this dietary radiation resulted from the opening of niche space, following the extinction of dinosaurian carnivores and herbivores.  We provide the first genomic evidence for the occurrence and timing of this dietary radiation in placental mammals.  By comparing the genomes of 107 placental mammals, we robustly infer that chitinase genes (CHIAs), encoding enzymes capable of digesting insect exoskeletal chitin, were present as five functional copies in the ancestor of all placental mammals, and the number of functional CHIAs in the genomes of extant species positively correlates with the percentage of invertebrates in their diets.  The diverse repertoire of CHIAs in early placental mammals corroborates fossil evidence of insectivory in Cretaceous eutherians, with descendant lineages repeatedly losing CHIAs beginning at the Cretaceous/Paleogene (K/Pg) boundary as they radiated into noninsectivorous niches.  Furthermore, the timing of gene loss suggests that interordinal diversification of placental mammals in the Cretaceous predates the dietary radiation in the early Cenozoic, helping to reconcile a long-standing debate between molecular timetrees and the fossil record.  Our results demonstrate that placental mammal genomes, including humans, retain a molecular record of the post-K/Pg placental adaptive radiation in the form of numerous chitinase pseudogenes.

Put more simply, the authors have discovered a fascinating correspondence:
I'd like a creationist to tell me why, if we did not evolve, we still have broken copies of a gene that would only be useful to a species that fed exclusively on insects. 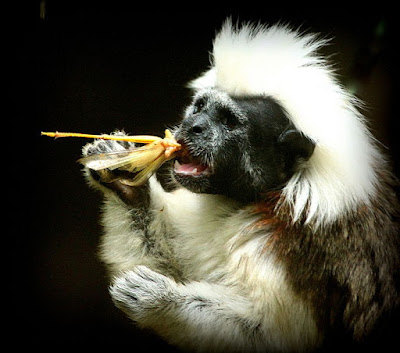 
In essence, we are looking at genomes and they are telling the same story as the fossils: that we think these animals were insectivorous and then dinosaurs went extinct.  After the demise of these large carnivorous and herbivorous reptiles, mammals started changing their diets...

One of the coolest things is, if you look at humans, at Fido your dog, Whiskers your cat, your horse, your cow; pick any animal, generally speaking, they have remnants in their genomes of a time when mammals were small, probably insectivorous and running around when dinosaurs were still roaming Earth.  It is a signature in your genome that says, once upon a time you were not the dominant group of organisms on Earth. By looking at our genomes, we are looking at this ancestral past and a lifestyle that we don’t even live with anymore.

I'm right there with Emerling in thinking this is amazingly cool.  That's what science is about, you know?  Elucidating some small part of the universe, and in the process, leaving us awestruck.  Myself, I'm just as glad we don't eat insects any more.  Grasshoppers simply don't appeal the way a rare t-bone steak does.  But the idea that we can show that my far distant ancestors, seventy million years ago, dined on bugs -- that is pretty freakin' cool.