Send in the clones

I'm not sure if it's heartening or discouraging to find out that the United States hasn't cornered the market on counterfactual lunacy.

I mean, that's the way it seems lately.  All I have to do is read the news -- something I've been trying not to do often, because it was having horrible effects on my mood -- and I see dozens of examples of people from my country who fervently believe stuff despite, or in some cases because of, there being no evidence whatsoever.

Or sometimes, even if there's powerful evidence supporting the opposing claim.  Amazing how squalling "fake news" has allowed people to resist even looking at opinions that they'd very much like not to be true.

But I guess people fall for loony claims the world over.  If I had any doubts of that, they were eradicated by a story sent to me by a friend and long-time loyal reader of Skeptophilia, which tells about how apparently there are a large number of people in Nigeria who think their president is an evil clone.

I'm not making this up.  President Muhammadu Buhari, who has been the leader of Nigeria since 2015, is gearing up for re-election in 2019, and this seems to have kicked into high gear a claim that Buhari isn't Buhari.  The fact that he was in London for treatment for an undisclosed illness last year was enough to convince a significant number of people that while he was overseas, Buhari was killed and swapped out for either a Sudanese lookalike named Jubril, or an evil laboratory-created clone who has nothing but wicked intent for the people of Nigeria. 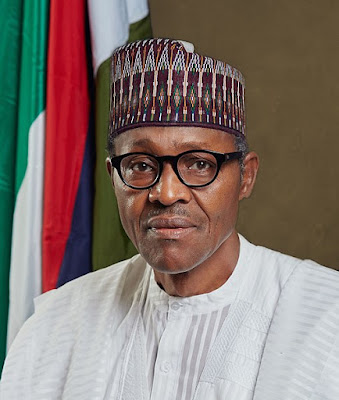 President Muhammadu Buhari, or at least so he says [Image is in the Public Domain]

Of course, Buhari claims it's all nonsense.  Also of course, it's had no effect whatsoever.  "It’s the real me, I assure you,” Buhari said in a press conference last Sunday in Poland, where he was attending a United Nations climate conference.  "I will soon celebrate my 76th birthday and I will still go strong."

Which, you have to admit, is exactly what either a Sudanese duplicate or an evil superintelligent clone would say.

The flames were then fueled by Buhari's enemies, who had nothing to lose and a lot to gain by trashing Buhari's credibility.  Nnamdi Kanu, who belongs to a group called Indigenous People of Biafra, has trumpeted the claim on his pirate radio station, Radio Biafra.  And the more Kanu and Buhari's other rivals spread the rumor around, the harder it is for Buhari to say, "Oh, for fuck's sake, are you people serious?" and have anyone listen.

He's still in there swinging, though.  At his news conference, he said, "One of the questions that came up today in my meeting with Nigerians in Poland was on the issue of whether I’ve been cloned or not.  The ignorant rumors are not surprising — when I was away on medical vacation last year a lot of people hoped I was dead."

Well, hoping someone's dead is not really the same thing as thinking he's a laboratory-created clone.  But the fact is, Buhari hasn't really been all that popular, and he's been accused of giving favors to people of his own ethnic group (the Fulani) and ignoring the plight of other groups, especially Christian ones.  Worse, his detractors say he's turned a blind eye to the depredations of Boko Haram, which is still terrorizing the northern part of the country.  The economy has pretty much tanked, with estimates of the ranks of the unemployed up around the ten million mark.

So it's not like Buhari's rivals don't have ammunition enough for criticizing his rule.  Which is probably why there are no fewer than 79 people running in the election, which even exceeds the electoral chaos we typically have here in the United States.  The problem is, it's not like his opponents are squeaky-clean, either; one of the favorites in the election is former vice president Atiku Abubakar, whose motto seems to be "help people when it's expedient and kick 'em in the balls when it isn't."  Abubakar's reputation for the carrot-and-stick approach is evident in the fact that Olosegun Obasanjo, who was himself president of Nigeria from 1999 to 2007, went from saying "If I support Atiku for anything, God will not forgive me" in August and singing his praises last week.

Which makes perfect sense, considering Abubakar's likelihood of winning the election and his penchant for taking revenge on people who criticize him.

So the whole thing is a mess, and is not being helped by the wacky claims about Buhari, or Evil Clone of Buhari, or Jubril of Sudan, depending on which version you went for earlier.

And you know, maybe that would explain a lot about our own political mess.  These elected officials aren't really human beings.  They're holograms that have been sent in by a race of aliens determined to bring down our civilization by making our leaders appear to have lost their marbles.  The problem -- from the aliens' point of view, anyhow -- is that it doesn't seem to be working.  Every time some person in government says something completely outlandish, or idiotic, or outright false, a good third of Americans say, "Exactly right!  You tell 'em!"

So maybe it's my fellow citizens who are holograms.  I just don't know any more.  At this point, I'm ready to throw in the towel and welcome our Alien Overlords.  Can't be any worse that what we've been enduring.