I remember a while back reading an interesting paper that concluded that dogs have a concept of fairness and morality.

There have been a number of studies confirming this, most strikingly an investigation involving border collies.  Pairs of dogs were trained to do a task, then rewarded with doggie biscuits.  The thing was, Dog #1 was rewarded for correctly doing the task with one biscuit, and Dog #2 with two biscuits for doing the same task.

Within a few rounds, Dog #1 refused to cooperate.  "I'm not working for one biscuit when he gets two," seemed to be the logic.  So -- amazing as it seems -- at least some dogs understand fair play, and will forego getting a treat at all if another dog is getting more.

It also implies an understanding of quantity.  Now, "two is more than one" isn't exactly differential calculus, but it does suggest that dogs have at least a rudimentary numeracy.  The evolutionary advantage of a sense of quantity is obvious; if you can do a quick estimate of the number of predators chasing you, or the size of the herd of antelope you're chasing, you have a better sense of your own safety (and such decisions as when to flee, when to attack, when to hide, and so on). 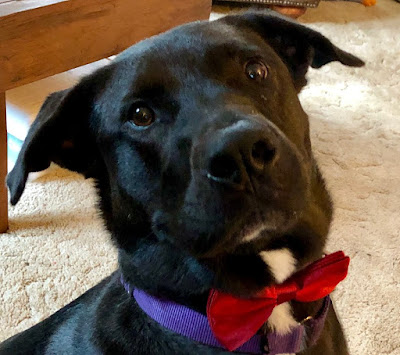 Guinness, either pondering Fermat's Last Theorem or else trying to figure out how to open the kitchen door so he can swipe the cheese on the counter

But how complex dogs' numerical ability is has proven to be rather difficult to study.  Which is why I found a paper last week in Biology Letters so fascinating.

Entitled, "Canine Sense of Quantity: Evidence for Numerical Ratio-Dependent Activation in Parietotemporal Cortex," by Lauren S. Aulet, Veronica C. Chiu, Ashley Prichard, Mark Spivak, Stella F. Lourenco, and Gregory S. Berns, of Emory University, this study showed that when dogs are confronted with stimuli differing only in quantity, they process that information in the same place in their brains that we use when doing numerical approximation.

The approximate number system (ANS), which supports the rapid estimation of quantity, emerges early in human development and is widespread across species.  Neural evidence from both human and non-human primates suggests the parietal cortex as a primary locus of numerical estimation, but it is unclear whether the numerical competencies observed across non-primate species are subserved by similar neural mechanisms.  Moreover, because studies with non-human animals typically involve extensive training, little is known about the spontaneous numerical capacities of non-human animals. To address these questions, we examined the neural underpinnings of number perception using awake canine functional magnetic resonance imaging.  Dogs passively viewed dot arrays that varied in ratio and, critically, received no task-relevant training or exposure prior to testing.  We found evidence of ratio-dependent activation, which is a key feature of the ANS, in canine parietotemporal cortex in the majority of dogs tested.  This finding is suggestive of a neural mechanism for quantity perception that has been conserved across mammalian evolution.

The coolest thing about this study is that they controlled for stimulus area, which was the first thing I thought of when I read about the experimental protocol.  What I mean by this is that if you keep the size of the objects the same, a greater number of them has a greater overall area, so it might be that the dogs were estimating the area taken up by the dots and not the number.  But the researchers cleverly designed the arrays so that although the number of dots varied from screen to screen, the total area they covered was the same.

And, amazing as it sounds, dogs not only had the ability to estimate the quantity of dots quickly and pick the screen with the greatest number, they were apparently doing this with the same part of their brains we use for analogous tasks.

"We went right to the source, observing the dogs' brains, to get a direct understanding of what their neurons were doing when the dogs viewed varying quantities of dots," said study lead author Lauren Aulet, in a press release in Science Daily.  "That allowed us to bypass the weaknesses of previous behavioral studies of dogs and some other species...  Part of the reason that we are able to do calculus and algebra is because we have this fundamental ability for numerosity that we share with other animals.  I'm interested in learning how we evolved that higher math ability and how these skills develop over time in individuals, starting with basic numerosity in infancy."

I wonder, though, how this would work with our dogs.  As I've mentioned before, Lena (our coonhound) has the IQ of a lima bean, and even has a hard time mastering concepts like the fact that the dog in the pond she barks at incessantly is actually her own reflection and not an Evil Underwater Dog Who Has Invaded Her Territory.  Guinness is smarter (not that the bar was set that high), but I don't know how aware of quantity he is.  He's more of an opportunist who will take advantage of any situation that presents itself, be it a single CheezDoodle someone dropped on the floor or (as happened two days ago) a half-pound of expensive French brie that was left unguarded for five minutes on the coffee table.

I doubt he worried about quantity in either case, frankly.

But the Aulet et al. study is fascinating, and clues us in that the origins of numeracy in our brains goes back a long, long way.  The most recent common ancestor between humans and dogs is on the order of eighty million years ago -- predating the extinction of the dinosaurs by fourteen million years -- so that numerical brain area must be at least that old, and is probably shared by most mammalian species.  It's a little humbling to think that a lot of the abilities we humans pride ourselves on are shared, at least on a basic level, with our near relatives.

But now y'all'll have to excuse me, because Lena wants to go outside.  I guess it's time for her to check and see if the Water Dog has returned.  She's a sneaky one, that Water Dog.