Yesterday's post, in which I skated backward through geologic time into the deep past, alluded to a few really bad times the Earth has been through.  Episodes of trap volcanism, which make the biggest volcanoes you can think of look like wet firecrackers.  Mass extinctions.  Asteroid collisions.

One awful event I didn't mention, however, is the Paleocene-Eocene Thermal Maximum.  It occurred about 56 million years ago.  The gist is that over a period of maybe fifty thousand years, there was a spike of carbon dioxide injected into the atmosphere -- over 44,000 gigatons (that's 44 trillion tons) of excess carbon dioxide.  The result was a greenhouse-effect temperature surge that was on the order of five to eight degrees Celsius, on average, worldwide.

The results were catastrophic, starting with the extinction of close to half of the species of foraminifera, single-celled organisms that form the basis of the oceanic food chain and whose calcareous shells were literally dissolved away by increasingly acidic water.  Life eventually bounced back -- it always seems to -- leading to diversification amongst a number of mammalian lineages, including ungulates and carnivores.

But for a while, things were pretty unpleasant.  Unbearably hot, a choking, acrid atmosphere laden with carbon dioxide and methane, and oceans like a sweltering vinegar bath.

Scientists at Columbia University's Lamont-Doherty Earth Observatory just published a paper this week in the Proceedings of the National Academy of Sciences that looks at why this sudden and catastrophic event occurred.  What they found out has two conclusions, one of interest only to folks who like geology, and the other which should terrify the absolute shit out of every human being on Earth.
Let's deal with the tame one first.
In "The Seawater Carbon Inventory at the Paleocene-Eocene Thermal Maximum," the researchers, Laura Haynes and Bärbel Hönisch, found that the cause of all this global havoc was a series of volcanic eruptions in what is now the North Atlantic.  The Mid-Atlantic Ridge had only recently formed, and North America was still in the process of separating from Europe.  Today the processes at the Ridge are relatively slow and steady -- London is moving away from New York City at about 2.5 centimeters a year -- because the area at the junction is made up of thin, fragile oceanic crust that is easy to tear apart.
But back in the Paleocene Epoch, the rift was forming underneath, old, cold, thick continental crust, and when that opened up, it was sudden and catastrophic.  Upwelling lava burned through deep layers of sedimentary rocks, not only coal seams but limestone.  Carbon dioxide was pumped into the atmosphere at a phenomenal rate.  If that wasn't bad enough, disturbance of sea floor sediments caused a massive ejection of methane, which is not only toxic but is a powerful greenhouse gas in its own right.
The result: a huge ecological shift causing a mass extinction.  "If you add carbon slowly, living things can adapt," said study co-author Bärbel Hönisch, in an interview with Science Daily.  "If you do it very fast, that's a really big problem." 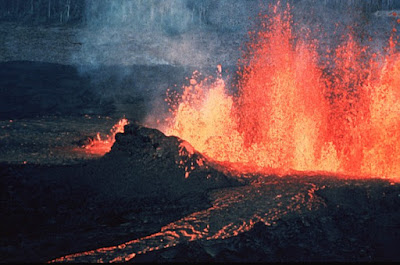 [Image is in the Public Domain]
Which brings us to the second conclusion.  This is the part you should really pay attention to.
The estimated rate of carbon injection that caused all this havoc was on the order of one gigaton per year.  (Estimates from the available evidence are between 0.3 and 1.7 Gt/year, so somewhere in the vicinity of one Gt/year is a ballpark average.)  The current measurements of the rate of carbon injection into today's atmosphere are around 10 Gt/year.
Ten times higher than during the catastrophic Paleocene-Eocene Thermal Maximum event.
I don't like to keep ringing the changes on the same topic, but dammit, we need someone in power to take charge of this situation and at least make a passing attempt to do something about it.  This "Meh, we've always used fossil fuels and it's been fine" attitude is seriously imperiling the long-term habitability of the Earth.  The data from today's atmospheric scientists and climatologists are unequivocal; analogous events in the past (the colossal Permian-Triassic Extinction has also been linked to a massive carbon spike) should be an indicator of where all this could lead.
People cite "economic catastrophe" as a potential result of unhooking ourselves from fossil fuels, and use that as a justification for jamming the brakes on any move toward renewable energy.  My response is, if you want to see a fucking economic catastrophe, just keep doing what you're doing.
Economic catastrophe will be the least of our worries.
More and more, people who are warning about the ultimate outcome of climate change -- both actual scientists, and also concerned laypeople like myself -- are seeming like Cassandra, the woman in Greek mythology who was given the power of perfect foresight, but simultaneously cursed to have no one believe her.  I don't know what it will take for elected officials to start listening to today's Cassandras.  Increasingly it's seeming like the only option is voting out damn near every politician currently in office.
The problem is that the political system is propped up by corporate money, with the result that rich donors and lobbyists have a stranglehold on the country.  How to solve that piece of the problem is beyond my ability to parse.
All I can do is keep sounding the alarm, and hope that someone --anyone -- influential is finally listening.
**********************************
Author Mary Roach has a knack for picking intriguing topics.  She's written books on death (Stiff), the afterlife (Spook), sex (Bonk), and war (Grunt), each one brimming with well-researched facts, interviews with experts, and her signature sparkling humor.
In this week's Skeptophilia book-of-the-week, Packing for Mars: The Curious Science of Life in Space, Roach takes us away from the sleek, idealized world of Star Trek and Star Wars, and looks at what it would really be like to take a long voyage from our own planet.  Along the way she looks at the psychological effects of being in a small spacecraft with a few other people for months or years, not to mention such practical concerns as zero-g toilets, how to keep your muscles from atrophying, and whether it would actually be fun to engage in weightless sex.
Roach's books are all wonderful, and Packing for Mars is no exception.  If, like me, you've always had a secret desire to be an astronaut, this book will give you an idea of what you'd be in for on a long interplanetary voyage.
[Note: if you purchase this book using the image/link below, part of the proceeds goes to support Skeptophilia!]