Midnight, the Proud Boys, and the lure of the mob

In the brilliant but devastating Doctor Who episode "Midnight," the Doctor is on a sightseeing expedition that turns deadly when an alien attacks the "space train," and takes over the body of one of the passengers.

The increasing sophistication of the alien -- whose real form we never see -- as it gradually learns to operate the body of the passenger it has hijacked is one of the most chilling progressions the series ever conceived.  The character of Sky Silvestri is played to the absolute hilt by actress Lesley Sharp, and her riveting portrayal of an intelligence that is intrinsically hostile to other life forms is the stuff of nightmares. 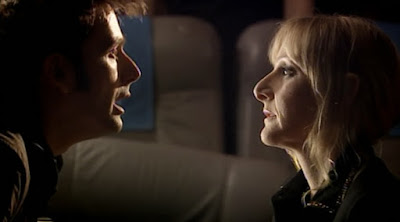 By far the scariest thing about the episode, however, is how the other passengers react.  Doctor Who doesn't often flinch from showing us the ugly side of humanity, and here is mob psychology at its absolute worst -- looking for someone to blame for what has happened, and unfortunately landing on the wrong person.  The result is near catastrophe, and the resolution of the story one of the most poignant and disturbing scenes I've ever watched.  (Ask any Whovian about the line "The Hostess -- what was her name?" and you'll be sure to get a reaction, as well as possibly depressing them for the rest of the day.)
The force of mob psychology has been much on my mind since the riots in Washington, D.C. this past weekend resulted in twenty-three arrests and four people hospitalized with stab wounds.  The #StopTheSteal rallying cry, based upon zero-evidence, entirely bogus claims by Donald Trump and his cronies, spurred far-right groups like the "Proud Boys" to stage demonstrations in downtown D.C., and of course -- undoubtedly what Trump wanted -- the demonstrators clashed with counter-protestors.  (If you doubt my labeling the claims of election fraud as "bogus," explain how those same claims have resulted in almost sixty lawsuits, all but one of which was shot down, including two unanimous 9-0 votes by the conservative-dominated Supreme Court.  Apparently no judge is willing to jeopardize her/his career and reputation supporting a lawsuit with zero evidence to support it, even judges appointed by Donald Trump himself.)
It seems like all you have to do is get a sufficient number of people together, and the psychology of the crowd takes over and accomplishes the rest.  As Terry Pratchett put it, "The IQ of a mob is equal to the IQ of its stupidest member, divided by the number of people in the mob."  In the case of the Proud Boys, this would be a vanishingly small quantity.  More scientifically, a paper back in 2017 by French psychologists Serge Moscovici and Marisa Zavalloni tried to quantify this effect, and found something as fascinating as it is horrifying.  It took 140 secondary school students, and asked them beforehand to give an assessment of two things -- their opinion of the French president, and their attitudes toward Americans.  They then had the test subjects join a group, discuss the two topics, and then reassessed their opinions afterward.
A lot of us have the impression that group discussion moderates extreme viewpoints -- something we might characterize as the "democratic principle," that if you give everyone a voice, the fringes on either end are argued out of their extremism, or at least so vastly outnumbered that their rants don't count for much.  What Moscovici and Zavalloni found was exactly the opposite.  Exposing people with moderate views to ones with extreme beliefs makes the moderate people more extreme.
In other words: being in a group increases the polarization of the members, even the ones who started out in the middle of the pack.
As psychologist Robert Cialdini put it, in his book Influence: The Psychology of Persuasion, "Whether the question is what to do with an empty popcorn box in a movie theater, how fast to drive on a certain stretch of highway, or how to eat the chicken at a dinner party, the actions of those around us will be important in defining the answer."
So much of what we do comes from the fact that, all civilization and culture and intelligence aside, at our core we're still just social primates.  It doesn't take much for the veneer of civility to fall away, and once that happens, we tend to base our behavior on the behavior of those around us.
For better or worse.
This all sounds pretty hopeless, but to return to where I started -- "Midnight" -- it's important to acknowledge the fact that sometimes all it takes is one person resisting the pull of the mob to turn things around.  This requires courage, determination, and (often) not an inconsiderable amount of risk.  But ultimately, it's the only way we can avoid the worst outcomes of our built-in tribal mentality -- intolerance, polarization, discrimination, and violence.  Let's hope that there are people today who have the guts to do this.
And maybe this time, we'll even remember their names.