I got onto social media some years ago for two main reasons; to stay in touch with people I don't get to see frequently (which since the pandemic has been pretty much everyone), and to have a platform for marketing my books.

I'm the first to admit that I'm kind of awful at the latter.  I hate marketing myself, and even though I know I won't be successful as an author if no one ever hears about my work, it goes against the years of childhood training in such winning strategies as "don't talk about yourself" and "don't brag" and (my favorite) "no one wants to hear about that" (usually applied to whatever my current main interest was).

I'm still on Facebook, Twitter, and Instagram, although for me the last-mentioned seems to mostly involve pics of my dog being cute.  It strikes me on a daily basis, though, how quickly non-dog-pic social media can devolve into a morass of hatefulness -- Twitter seems especially bad in that regard -- and also that I have no clue how the algorithms work that decide for you what you should and should not look at.  It's baffling to me that someone will post a fascinating link or trenchant commentary and get two "likes" and one retweet, and then someone else will post a pic of their lunch and it'll get shared far and wide.

So I haven't learned how to game the system, either to promote my books or to get a thousand retweets of a pic of my own lunch.  Maybe my posts aren't angry enough.  At least that seems to be the recommendation of a study at Yale University that was published last week in Science Advances, which found that expressions of moral outrage on Twitter are more often rewarded by likes and retweets than emotionally neutral ones. 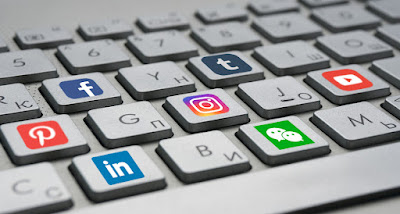 Apparently, getting likes and retweets is the human equivalent of the bell ringing for Pavlov's dog.  When our posts are shared, it gives us incentive to post others like them.  And since political outrage gets responses, we tend to move in that direction over time.  Worse still, the effect is strongest for people who are political moderates, meaning the suspicion a lot of us have had for a while -- that social media feeds polarization -- looks like it's spot-on.

"Our studies find that people with politically moderate friends and followers are more sensitive to social feedback that reinforces their outrage expressions,” said Yale professor of psychology Molly Crockett, who co-authored the study.  "This suggests a mechanism for how moderate groups can become politically radicalized over time — the rewards of social media create positive feedback loops that exacerbate outrage...  Amplification of moral outrage is a clear consequence of social media’s business model, which optimizes for user engagement.  Given that moral outrage plays a crucial role in social and political change, we should be aware that tech companies, through the design of their platforms, have the ability to influence the success or failure of collective movements.  Our data show that social media platforms do not merely reflect what is happening in society.  Platforms create incentives that change how users react to political events over time."
Which is troubling, if not unexpected.  Social media may not just be passively encouraging polarization, but deliberately exploiting our desire for approval.  In doing so, they are not just recording the trends, but actively influencing political outcomes.
It's scary how easily manipulated we are.  The catch-22 is that any attempt to rein in politically-incendiary material on social media runs immediately afoul of the rights of free speech; it took Facebook and Twitter ages to put the brakes on posts about the alleged danger of the COVID vaccines and the "Big Lie" claims of Donald Trump and his cronies that Joe Biden stole the election last November.  (A lot of those posts are still sneaking through, unfortunately.)  So if social media is feeding social media polarization with malice aforethought, the only reasonable response is to think twice about liking and sharing sketchy stuff -- and when in doubt, err on the side of not sharing it.
Either that, or exit social media entirely, something that several friends of mine have elected to do.  I'm reluctant -- there are people, especially on Facebook, who I'd probably lose touch with entirely without it -- but I don't spend much time on it, and (except for posting links to Skeptophilia every morning) hardly post at all.  What I do post is mostly intended for humor's sake; I avoid political stuff pretty much entirely.
So that's our discouraging, if unsurprising, research of the day.  It further reinforces my determination to spend as little time doomscrolling on Twitter as I can.  Not only do I not want to contribute to the nastiness, I don't need the reward of retweets pushing me any further into outrage.  I'm outraged enough as it is.