Determining which languages are related to which is significantly more difficult than you might expect.

English, for example.  Most people know that it's a Germanic language, related not only to German but to Dutch, Flemish, and (more distantly), to the Scandinavian languages.  This shows most strongly in the basic vocabulary; the majority of our common verbs and nouns, as well as pronouns, prepositions, and conjunctions, have Anglo-Saxon -- i.e., Germanic -- origin.

However, consider the first sentence in this post.  The words which, are, to, is, more, than, you, and might are Germanic; but the more complicated words (determining, languages, related, significantly, difficult, and expect)  -- the ones that carry most of the meaning -- are all Latin in origin.  So is English actually a Romance language?

It isn't, of course, but a superficial look at the language might well push you to reach the wrong conclusion.  Most of our words of Greek and Latin origin were either via the Norman French spoken by the conquerors and ruling class in England who came in during the eleventh century, or later borrow-words that slipped into common parlance from their use in legal, scientific, and religious contexts.  English, in fact, has borrowed words from just about every language it's contacted.  A few interesting ones: 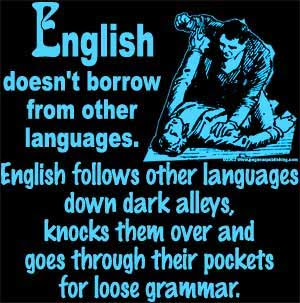 Despite all this, it remains a Germanic language in basic structure, something that is borne out by our knowledge of the history of English-speaking people.

We English-speaking linguists are lucky, because the written records for English and its antecedents are generally excellent.  We have a highly-detailed map of how the language evolved, and even in the case of borrow-words, we can often pinpoint not only where they came from, but when they entered the English language.  Things are far murkier with languages that have a poorer -- or completely nonexistent -- written history.  In that case, we're left with the immense task of using similarities in word roots and syntactic structure as the basis for inferring where a language fits in the overall family tree.

And sometimes even that isn't enough.  There are a good number of languages for which we have been unable to establish a clear relationship to any other; these are called language isolates, and include Basque, Sandawe (a language spoken in Tanzania), Zuni, Huave (an indigenous language in Mexico), Burushaski (spoken by about 100,000 people in Pakistan), and -- amazingly -- Japanese and Korean.

In fact, it's the latter two that are why this topic comes up today.  Both Japanese and Korean are of unclear relationship to each other and to the other languages in the region.  The Japanese writing system is largely borrowed from Chinese; the Japanese kanji is an ideographic script that uses many identical characters to those in Chinese (although the pronunciations, and some of the meanings/connotations, are completely different).  Korean writing, on the other hand, is of known provenance; the script (hangul) is a phonetic alphabet that was invented by the fifteenth-century King Sejong to give the speakers of Korean a standard, easily-learned way of writing the language.

So despite having complex and well-studied writing systems, the historical records of Japanese and Korean don't help us a lot with establishing how they fit in with other Asian language families.  But some research published last week in Nature, which I found out from loyal reader of Skeptophilia Gil Miller, has proposed a solution to the mystery.  Using computational analysis to map out not only the related features between the languages but their degree of separation -- analogous to the genetic bootstrap analysis used by evolutionary biologists to determine when the common ancestor between two species existed -- they figured out that not only are Japanese and Korean distantly related to each other, they're also related to Mongolian, to the Tungusic languages of eastern Siberia and Manchuria, and to... Turkish!

"We have languages, archaeology and genetics which all have dates.  So we just looked to see if they correlated," said study co-author Martine Robbeets, of the Max Planck Institute for the Science of Human History, in an interview with New Scientist.  "We all identify ourselves with language.  It’s our identity.  We often picture ourselves as one culture, one language, one genetic profile.  Our study shows that like all populations, those in Asia are mixed."
Her use of the phrase "we just looked" makes it sound simple, but that's undue modesty and a significant understatement.  In practice, determining these kind of relationships is anything but easy, and the Robeets et al. study -- if it bears up under further analysis -- is positioned to solve a linguistic conundrum of very long standing.  The work by Robbeets and her colleagues traces these curious language isolates and their relatives to a common origin in the Liao River Valley of northeastern China, on the order of nine thousand years ago, which is pretty stunning.
It also shows that despite the dearth of records and distance in time, we can still gain new insights into the origins of languages long thought to be a mystery -- and potentially reconnect spoken languages that once were considered oddball isolates, related to no other speech system.
*********************************************
If Monday's post, about the apparent unpredictability of the eruption of the Earth's volcanoes, freaked you out, you should read Robin George Andrews's wonderful new book Super Volcanoes: What They Reveal About the Earth and the Worlds Beyond.
Andrews, a science journalist and trained volcanologist, went all over the world interviewing researchers on the cutting edge of the science of volcanoes -- including those that occur not only here on Earth, but on the Moon, Mars, Venus, and elsewhere.  The book is fascinating enough just from the human aspect of the personalities involved in doing primary research, but looks at a topic it's hard to imagine anyone not being curious about; the restless nature of geology that has generated such catastrophic events as the Yellowstone Supereruptions.
Andrews does a great job not only demystifying what's going on inside volcanoes and faults, but informing us how little we know (especially in the sections on the Moon and Mars, which have extinct volcanoes scientists have yet to completely explain).  Along the way we get the message, "Will all you people just calm down a little?", particularly aimed at the purveyors of hype who have for years made wild claims about the likelihood of an eruption at Yellowstone occurring soon (turns out it's very low) and the chances of a supereruption somewhere causing massive climate change and wiping out humanity (not coincidentally, also very low).
Volcanoes, Andrews says, are awesome, powerful, and fascinating, but if you have a modicum of good sense, nothing to fret about.  And his book is a brilliant look at the natural process that created a great deal of the geology of the Earth and our neighbor planets -- plate tectonics.  If you are interested in geology or just like a wonderful and engrossing book, you should put Super Volcanoes on your to-read list.
[Note: if you purchase this book using the image/link below, part of the proceeds goes to support Skeptophilia!]