When I was a kid, I absolutely loved the show Lost in Space.

Not only did I think the stories were exciting, there was the comic relief from Dr. Smith (overacted by Jonathan Harris) and the fact that I had a life-threatening crush on Judy Robinson (played by Marta Kristen).  Now, with the perspective of time, I'm struck by how ridiculous most of the plots were, and also how fast and loose they played with science, even stuff that was known and understood at the time.  A few of the goofier ones:

A recurring theme was the sudden appearance of a "cosmic storm."  What about them was "cosmic" was never explained, because usually all that happened is there was about forty-five seconds of wind, which blew around styrofoam rocks and stage props made of cardboard, and the Robot went around flailing his claws and shouting "Danger!  Danger!  A cosmic storm!"  Whatever these cosmic storms were supposed to be, they always heralded the appearance of one or more aliens, which included an extraterrestrial biker gang, a space cowboy, a magician (played by Al Lewis, best known for his depiction of Grandpa on The Munsters), a pirate (complete with an electronic parrot), a bunch of hillbillies (whose spacecraft looked like a wooden shack with a front porch), and in one extremely memorable episode, Brünhilde, who proceeded to yo-to-ho about the place, resplendent in a Viking helmet and riding a cosmic horse who unfortunately appeared to be made of plastic. 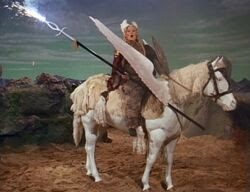 What's kind of a shame about all this is that the writers missed an opportunity (well, three seasons' worth of opportunities, really) to use actual science as a plot point.  Because there are cosmic storms, or at least something like them; they're called coronal mass ejections, and occur when a blob of plasma erupts off the surface of the Sun.  Small ones happen pretty much every day, but some of these things are freakin' huge, most notably the "Carrington Event" of 1859, which if it occurred today would have fried satellites and knocked out most of the world's power grid.  (As is, it caused sparking from telegraph lines that resulted in a number of fires.)
It turns out that even the Carrington Event is on the small side of what CMEs are capable of, judging by a paper last week in Nature Astronomy.  Scientists at the University of Colorado were studying a star called EK Draconis, which is rather like the Sun except much younger, and they saw it produce a CME that was ten times more powerful than anything we've ever seen the Sun do.  As it left the surface of the star, the burst of plasma was traveling well over a million kilometers an hour.
Any planet in the way would be in serious trouble.  Some scientists believe that a CME of that magnitude might be part of why Mars has such a thin atmosphere; a large CME aimed in its direction could well have stripped most of its atmosphere away.
The question, of course, is, whether the Sun is capable of such an outburst.  The answer is "we're not sure, but probably."  Like I said, EK Draconis is fairly Sun-like; but it's far earlier along in its stellar evolution, and is more or less what the Sun looked like 4.5 billion years ago.  So its massive CME could be because it's in its turbulent youth, and the Sun has now settled down into comfortable middle age so it won't be quite so likely to blow plasma in our general direction.  But even so, the Carrington Event shows that the Sun is still capable of some serious pyrotechnics.  At present, there's no way to predict when they'll happen, or where on the Sun's surface; to do significant damage, the CME would have to be aimed toward the Earth.  We do know they're connected with the eleven-year sunspot cycle.  Solar flares and other surface disturbances are more common when sunspots are at their maximum (the next solar maximum is predicted to be in 2024).  But lots of sunspot cycle maximums come and go without any catastrophic CMEs, so there is still no sure way to predict the turbulence that precedes the storm.
The authors write:

Our findings can therefore provide a proxy for the possible enormous filament eruptions on young solar-type stars and the Sun, which would enable us to evaluate the effects on the ancient, young Solar System planets and the Earth, respectively.  Further, it is also speculated that stellar mass loss due to filament eruptions/CMEs can affect the evolutionary theory of stellar mass, angular momentum and luminosity more importantly than can stellar winds.  At present, frequency and statistical properties of CMEs on solar-type stars are unknown, but important insights into these factors will be obtained by increasing the number of samples in the future.

So I think we can all agree that this is much more impressive than Lost in Space-style cosmic storms, even without the alien Vikings and what-have-you.
It also highlights how powerful and unpredictable our universe can be.  On a calm, sunny day, it's easy to forget what a turbulent inferno the Sun actually is.  Me, I think it's a good idea when humans are reminded periodically that on the universal scale, we're really small.  There are potential disasters we can't predict or prevent -- CMEs being one example -- but maybe if we have impressed upon us how vulnerable we are, how dependent on our clement world, we'll finally start taking better care of what we have and averting the disasters we can prevent.
*****************************************
I've mentioned before how fascinated I am with the parts of history that still are largely mysterious -- the top of the list being the European Dark Ages, between the fall of Rome and the re-consolidation of central government under people like Charlemagne and Alfred the Great.  Not all that much was being written down in the interim, and much of the history we have comes from much later (such as History of the Kings of Britain, by Geoffrey of Monmouth, chronicling the events of the fourth through the eighth centuries C.E. -- but written in the twelfth century).
"Dark Ages," though, may be an unfair appellation, according to the new book Matthew Gabriele and David Perry called The Bright Ages: A New History of Medieval Europe.  Gabriele and Perry look at what is known of those years, and their contention is that it wasn't the savage, ignorant hotbed of backwards superstition many of us picture, but a rich and complex world, including the majesty of Byzantium, the beauty and scientific advancements of Moorish Spain, and the artistic genius of the master illuminators found in just about every Christian abbey in Europe.
It's an interesting perspective.  It certainly doesn't settle all the questions; we're still relying on a paucity of actual records, and the ones we have (Geoffrey's work being a case in point) sometimes being as full of legends, myths, and folk tales as they are of actual history.  But The Bright Ages goes a long way toward dispelling the sense that medieval Europe was seven hundred years of nothing but human misery.  It's a fascinating look at humanity's distant, and shadowed, past.
[Note: if you purchase this book using the image/link below, part of the proceeds goes to support Skeptophilia!]