Cliffs of ice and rivers in the sky

One of the most frustrating things is that instead of meeting the challenges we have and then moving forward, we seem to be fighting the same battles over and over and over.  It's like running on a treadmill, except instead of getting aerobic exercise, all you get is high blood pressure and an ulcer.

It will come as no surprise that I'm once again referring to anthropogenic climate change, which has such a mountain of evidence behind it that there is no argument any more.  Or there shouldn't be.  But all it takes is Some Guy On The Internet making a comment that amounts to "Nuh-uh, is not," and all of the science deniers give him a standing ovation and say, "See, we told you."

The latest in the long line of unqualified anti-science types acting as if their pronouncements somehow outweigh actual research is a tweet from Matt Thomas claiming that the eruption of Mt. Merapi in Indonesia in 2020 exceeded all of the human-generated carbon dioxide ever emitted.  Thomas said, "This volcano just spewed more CO2 than every car driven in history.  Climate change is natural.  Taxing us into poverty isn’t the answer."

Despite the fact that this isn't just false, it's false by several orders of magnitude, it immediately started a Greek chorus of "Climate change is a hoax!" from all the self-appointed climatologists on Twitter.  The tweet got over a hundred thousand likes, and the video link he provided got millions of views.  I've seen it posted on social media dozens of times myself, always to shouts of acclamation.  Very few people responded the way I did, which was to say, "You, sir, are a dangerous idiot."  It seems like a lot of the people who actually trust science have been wearied to the point of exhaustion, and we're just not taking the bait any more.

And it's not like the numbers aren't out there to confirm Thomas's dangerous idiocy.  Anyone with a computer and access to scientific databases on the internet can check his figures, and see that he's not just in left field, he's so far away he couldn't see left field with a powerful telescope.  In an average year, all the volcanic activity in the world releases about 0.3 gigatons of carbon dioxide; the carbon dioxide released in one year from vehicular exhaust is ten times higher than that.  (Note that this is all the emissions from all the volcanoes in a year, as compared to vehicular emissions in a year; Thomas was claiming that one volcano exceeded the emissions of all the automobiles ever created.  I guess if you're gonna lie, you may as well make it a doozy.)

So instead of trusting Some Guy On The Internet, let's look at what the actual science is saying.  How's that for a novel idea?

Just last week there were three studies that in a sane world, would alarm the hell out of everyone, but for some reason, have barely caused a blip on the radar.

First from the University of Tsukuba (Japan), we have a study showing that a scary meteorological phenomenon called an atmospheric river is predicted to spike in frequency, especially in east Asia.  Atmospheric rivers are pretty much what they sound like; narrow, fast-moving bands of extremely humid air, that undergo what's called adiabatic cooling when they run into land that has a higher elevation.  This forces the air upward, causing the volume to expand and the temperature to drop -- and all of that moisture condenses as rain or snow.

We're not talking insignificant amounts of water, here.  An atmospheric river, propelled by a typhoon a thousand kilometers to the east, struck Henan Province in China last year.  The amount of rainfall they received is, honestly, hard to imagine.  In three days the city of Zhengzhou got sixty centimeters of rainfall -- about equal to its average annual precipitation.  In some places in the region, the rainfall rate exceeded twenty centimeters per hour.  Over three hundred people died in the floods, and the damage was estimated at twelve billion dollars.

And this phenomenon isn't limited to east Asia.  Want it brought home to you, Americans?  This same phenomenon has been known to strike other places with strong on-shore air currents driving into lowland areas bounded by steep climbs in elevation -- like the Central Valley of California.

The second study is from the Alfred Wegener Institute in Germany, and found that current models support that Greenland -- one of the world's largest repositories of land-bound ice -- has a delayed response to warming.  Meaning that even if everyone suddenly wised up and cut greenhouse emissions and the temperature stabilized, the Greenland Ice Cap would continue to melt.

The response of Some Guy On The Internet to this was a viral YouTube video showing an ice cube melting in a cup of water, wherein the water level in the cup did not change, captioned,  "A little science lesson for the IDIOTS at the global warming conference," once again to rousing applause, despite the fact that this particular SGOTI neglected the fact that the meltwater that matters is from ice that starts out on land.

That almost no one raised this objection makes me despair for the state of science education in American public schools.

Scariest of all was the study presented at the annual meeting of the American Geophysical Union warning that the Thwaites Glacier -- an on-land mass of ice about the size of Florida -- is in imminent danger of collapse.  And I do mean imminent; we're not talking "by 2100."

The prediction is that the collapse could come some time in the next three to five years. 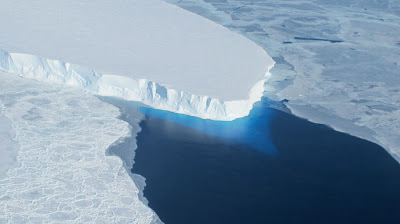 What's going on is that Thwaites is held back by a floating ice shelf, the bottom of which is caught against the top of an undersea mountain.  The recent study looked at the rate of warm water infiltration and melting on the underside of that ice sheet, and found that the area of ice that's caught -- the part that's providing the friction holding the whole thing in place --  has decreased drastically.  It's like putting a chuck underneath the tire of a car in neutral sitting on an incline.  It doesn't move -- until you remove the chuck.  After that, the car rolls forward, and continues to accelerate.

If the ice sheet holding Thwaites back buckles, the entire glacier will start to slide.  Dumping this much ice into the ocean will raise sea levels by something on the order of sixty centimeters, inundating coastlines and low-lying areas and displacing millions of people.

Although the studies have improved in terms of detail, none of this is new information.  Scientists have been sounding the alarm for decades.  Increasingly they're taking the role of Cassandra -- the figure from Greek myth who was blessed with the ability to see the future, but cursed to have no one believe her.  The situation isn't helped by deliberate anti-science propaganda from the corporations who stand to lose financially if fossil fuels are phased out, and "news" services who are funded by those same corporations.

And, of course, by a populace who has been brainwashed to pay more attention to Some Guy On The Internet than to the hard data and sophisticated models generated by trained scientists.  But wearing blinders only works for so long.

Once you're up to your neck in sea water, it will be a little hard to argue that the scientists have been lying all along.