Yesterday I ran into a piece of research out of the Royal Melbourne Institute of Technology that was published this week in Drug and Alcohol Review, entitled, "Who Uses Digital Drugs?  An International Survey of 'Binaural Beat' Consumers."  I was curious about it -- I'd heard about binaural beats and their potential psychological effects a while back -- so I read the paper.

I was hoping for some analysis of whether they worked, but it turns out that the research was limited to exactly what the title offered; a summary of who is using them and why.  Turns out that that 72% of users were trying to relax or fall asleep, 35% were trying to change their mood, and 12% were trying for a psychedelic experience.  There was some attempt to look into their use as a "gateway drug," but it turned out that according to the researchers, "most of the people who were looking for a psychedelic experience already consumed ingestible drugs."

So that got me into looking at the bigger question of whether or not they could deliver the effects they promised.  I came across a website called "Binaural Beats: A Meditation Shortcut" that looked promising, and better still, it explained what "binaural beats" are.  The idea, apparently, is that you listen to two sounds simultaneously, which differ slightly in frequency (the example given was a 114 hertz tone in the left ear and a 124 hertz tone in the right).  This will result in your hearing a "beat frequency" or "binaural beat," whose frequency is equal to the difference between the two (in this case, 10 hertz). 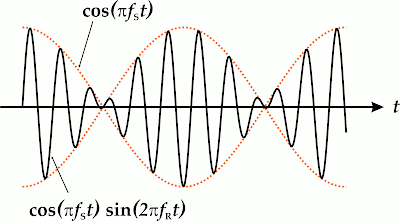 [Image is licensed under the Creative Commons Ansgar Hellwig, Beating Frequency, CC BY-SA 3.0]
So far, nothing too strange, and a phenomenon that would be familiar to anyone who has tried to tune the strings of a guitar.  But what this site, and others like it, claim is that the induced beat frequency will change the frequency of your brain waves, and cause... well, all sorts of things.

The site says that it will bring on a "meditative state:"

When you listen to sounds of a certain frequency, your brain waves will synchronize with that frequency.  You entrain every time you hear a musical beat that has you bobbing your head or tapping your foot.

Using binaural beats provides an easy shortcut.  All you have to do is put on a set of headphones or earbuds, relax, and listen.  For many people, this brings their brains into the same state as deep meditation quickly.

Which was interesting enough, so I started poking around at what else they were claiming this phenomenon did.  I found out quickly that meditative states aren't the only things that binaural beats allegedly can induce.  If you hit the right binaural beat frequency, supposedly you can:

lucid dream
boost your memory
get past creative blocks
(safely) simulate the mental effects of drugs such as marijuana, cocaine, and ecstasy
lose weight and increase your metabolic rate
jumpstart your physical and mental energy levels
have a "mind-blowingly intense hands-free orgasm"

So naturally, I had to investigate all this.  I skipped the first three, given that (1) I already sleep poorly and have weird dreams, and have no particular desire to make this any worse, (2) I'm too impatient to conduct a long enough experiment to see if my memory improves, and (3) I do pretty well in the creativity department already.

The fourth one, on the other hand, was intriguing.  I thought it might be interesting to see if I felt high and/or stoned after listening to some tones going "wah-wah-wah" in my ears, so I gave it a shot.

If a sample size of one means anything, I can report back... nothing.  I didn't feel any loopier after listening to drug-simulating binaural beats for fifteen minutes than I did before.  So I went on to the "jumpstart your energy levels" one (I really don't need to lose weight), and once again... nada.

Then -- purely in the interest of scientific research, of course -- I had to try the last one.

I found two places that supposedly had orgasm-inducing binaural beats.  Listening to the first one was about as arousing as listening to a washing machine on spin cycle.  So I thought, "Maybe my sex frequency isn't attuned to that one, or something."  So I clicked on the second one, and I found out that on this recording, the binaural beat frequency was overlain with the sounds of a couple in the throes of noisy, and apparently extremely pleasurable, sex.  (And no, I'm not going to provide a link.  You'll have to track that one down yourself.)

So it was not exactly a well-controlled experiment.  Of course, I didn't listen for all that long, because otherwise my wife would have come into my office to see what the hell I was doing in here.   ("Research, honey!  Empirical research!  Really!")

In any case, my own investigation of binaural beats was kind of a bust.  So I decided to see if there'd been any good studies done of the effect, and I found a site that had what seemed to me to be fair and unbiased summaries of the research.  And the general conclusion is...

... well, you get the idea.  Although I have to add that throwing in the sex noises was hardly fair.

I suppose the whole thing is harmless enough.  I've done a bit of meditating over the years -- never consistently enough to make it a practice, but enough to get the flavor of it -- and found it to be great for calming the mind and centering the body.  So whatever you're after, if "binaural beats" helps you to get there faster and deeper (as it were), cool.

As for the rest of it -- have fun experimenting, but if you're approaching it skeptically, keep in mind that the results might be less than "mind-blowingly intense."