Whenever I think I've found the last mysterious beast in the world, and my career as a cryptozoologist is all over but the laughing, I stumble upon another one I've never heard of.

Yesterday I was preparing a slideshow on the evolutionary time-scale for my biology class, and was trying to find some good images of prehistoric animals to download.  Cognizant of the fact that I'm teaching teenagers, naturally I gravitated toward what my wife calls "charismatic megafauna," so my slideshow heavily favored animals like T. rex, velociraptors, and Baluchitherium (the last-mentioned is the largest land mammal ever -- if you were standing next to it you could barely reach its kneecap if you had a stepladder, and it could have turned an African elephant into an African elephant pancake).  So, anyway, I was trying to find some images of mesonychids, which were Paleocene and Eocene predators that looked a little like giant bears or wolves but were actually related to hoofed mammals, and I ran into the following image: 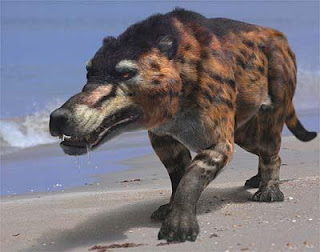 This scary-looking beast, Andrewsarchus, is represented here striding across the Eocene landscape, looking for some tiny, German-shepherd-sized horses to munch on.  (The fossil evidence does not include drool, so the artist may have been taking a few liberties.)

In any case, after adding the picture to my slideshow, I noticed that it was not from a website on paleontology (although the image originally appeared in a BBC feature about extinct animals, it has made the rounds since then).  This image was on a site devoted to the history of the Beast of Gévaudan.

The Beast of Gévaudan, it seems, was a horrible monster who terrorized the region of Gévaudan in France (now the département of Lozère in south-central France) in the mid-1700s.  It dispatched its victims by ripping their throats out.  Apparently, there were more than sixty victims of the beast, the first a fourteen-year-old girl killed in 1764.  There were hundreds of eyewitnesses to the thing; it was described as a huge, hairy quadruped, with a foul odor and a heavy, thick tail.  Thus far, there's nothing particularly weird here, and in fact this description matches my friend's dog Rudy, who is half mastiff and half golden lab but looks like he has some horse somewhere in his ancestry.  Rudy has no idea how enormous he is, and galumphs around inside the house knocking over large pieces of furniture, all the while wagging happily.  Rudy's huge head, which is made entirely of reinforced concrete, is at a height that is seriously unfortunate for any adult male visitors, and guys have been known to go into a protective crouch whenever Rudy so much as looks at them.

The various reports of the Beast of Gévaudan, when coalesced into a single description, paint a picture of a heavy-bodied animal a little smaller than a horse, with a reddish, spotted pelt, a long, thick snout, broad paws whose digits ended in claws or nails, and eyes that seemed disproportionately small.  Let's review our artist's depiction of an Andrewsarchus:

The Beast of Gévaudan was finally killed in June 1767 by a hunter named Jean Chastel.  Chastel had been hired by the French government to take care of the Beast, and the story is that he was standing, leaning against a tree reading his bible, when he heard a noise and saw the Beast loping toward him, murder in its eyes.  Instead of pissing his pants and then having a stroke, which is probably what I would have done, he calmly lifted his rifle and shot the Beast between the eyes with a specially-prepared silver bullet.  Chastel's bravery earned him a monument in his honor in the village of La Besseyre-Sainte-Marie, near where the Beast was killed.

Chastel placed the Beast's body on a wagon of a man bound for Versailles, with instructions to deliver it to the authorities there so that Chastel could collect his reward.  But this being in the days before refrigeration, the carcass started to decompose, and finally began to smell so bad the wagon-driver buried it beside the road along the way.  Chastel apparently never got his reward.

So, was the Beast of Gévaudan an Andrewsarchus, or some surviving mesonychid whose ancestors had made it all the way from the Eocene Epoch (which ended 34 million years ago), undetected until that time in the forests of southern France?

Unfortunately, probably not.  There were other, similar attacks in western Europe in the 18th century and earlier, and all of the ones for which we have decent descriptions turned out to be wolves (usually rabid).  In fact, in September of 1765 a hunter in Gévaudan, Francois Antoine, killed what he thought was the Beast itself, but found out different when the attacks resumed three months later.  Antoine's animal was clearly a wolf, although Antoine describes it as being one of the most humongous badass wolves he'd ever seen (I paraphrase slightly).

Sad to say, the Beast of Gévaudan itself was also probably a humongous badass wolf, which were not uncommon in those days.  Too bad; it'd be cool if Andrewsarchus had survived, although heaven knows I'd rather not meet one face-to-face.  In any case, it's nice to know that you can devote your career to the study of cryptozoology, and after several decades still run into sightings you'd never heard of.
Posted by Gordon Bonnet at 3:11 AM