Yesterday, the British Ministry of Defence (MoD) announced that it has declassified and released 8,500 pages of reports on UFO sightings in the United Kingdom.

As usual, it's a mixed bag.  There are a few there I'd like an explanation for, most notably the "zigzagging lights" seen by more than one person in 2003, over Bromley, Kent.  They were seen by a number of people, including a helicopter pilot - but they didn't show up on radar, and were never satisfactorily accounted for.

The released documents also contain the reports which led to a discussion in the House of Lords in January 1979  regarding whether aliens had visited the Earth -- the only such discussion, I believe, that has ever taken place in the governing body of a country.  The subject was introduced by the amusingly-named Brinsley LePoer Trench, Lord Clancarty, who was a prominent UFOlogist and a general crank.  Clancarty was a champion of the Hollow Earth Theory -- that there were highly advanced civilizations living inside the Earth, which is hollow (as you'd undoubtedly already gathered from the name of the theory), and those civilizations are able to exit through holes at both poles.  Clancarty himself claimed to be descended from aliens, and was able to trace his lineage back to 63,000 BC.  So you can imagine that with such impressive credentials, when Clancarty demanded that the House of Lords examine the evidence and come to an official answer as to whether aliens had visited Earth, they complied.  (The answer the House of Lords came to was, "No.")

Also in the files are descriptions of the 1967 incident in which six small flying saucers were discovered in locations along a straight line in southern England, prompting a response by the RAF, firefighters, bomb disposal units, various local constabularies, and the British Intelligence Agency.  They turned out to be the results of a project by engineering students at Farnborough Technical College.

Then, there's the guy who got up in the middle of the night for a glass of milk, and was terrified to see a huge, cigar-shaped UFO whose engines rattled the house.  Afterwards, he reported that he had "gained a whole hour" and suspected that the aliens had beamed him up and made his biological clock, and his actual watch, lose track of the correct time.

MoD officials informed the man that because it was October, Britain had gone off Daylight Savings Time that evening, so everyone in Britain had experienced the same time discontinuity.

There are also drawings.  My favorite is this one: 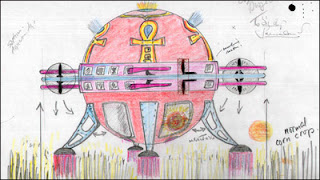 It shows how the updraft from a UFO could create crop circles, thus giving us information on two different phenomena at the same time.  My first thought on seeing this photo was, "Why would aliens from another world have images of Kenny from South Park painted on the side of their spacecraft?"  But maybe that's not what those are.  Maybe they're supposed to be the aliens themselves, arms wide open in a gesture of welcome.  Or maybe the aliens have hung their yellow rain slickers out to dry.  I don't know.

In any case, if you're curious, the MoD is putting the documents online, available for the public, on a website (here).  I encourage you to peruse them.  I know I will.
Posted by Gordon Bonnet at 2:31 AM