Today's forecast: planetary alignment, with a slight chance of catastrophe

This month, four planets will seem to meet in the night sky -- Mercury, Venus, Mars, and Jupiter will twice form "trios," a relatively rare event in which three planets are all within five degrees of each other.  The first one occurs today; Mercury, Venus, and Jupiter will all be a little over two degrees apart.  The second will be on May 21, when Mercury, Venus, and Mars will be just a hair further apart.  Then, at the end of the month, the four planets will be stretched out in a straight line near the horizon.

All of this has an assortment of people leaping about making little squeaking noises.  Astrologers, of course, think this is some pretty heavy stuff, of huge significance to people on Earth, and of even greater importance to anyone born on those days.  I could probably find more details regarding what they think it all means, but every time I read astrological predictions a few more of my brain cells die, and heaven knows I can't afford to lose many more, so I'll leave that as an exercise for the reader.

Then we have the Rapture crowd, who point out that it's significant that one of these Cosmic Convergences occurs on May 21, the day when Harold Camping believes that the Good Guys will be assumed bodily into heaven, and the Bad Guys will be left behind to face months of tribulations before Satan comes and eats us all for lunch.  Never mind that trios have occurred many times in the past, and Satan hasn't shown.  This time, they assure us, it's really gonna happen.  Me, I'm waiting for May 22, which I'm guessing will show that unfortunately Camping et al. are still alive and well and living on Earth, albeit presumably somewhat embarrassed.

Then we have the woo-woos who think that it has something to do with the Mayan calendar, a topic I'm frankly getting fed up with.  One website says that it will be "one of the most exciting, powerful and transformative celestial events of our millennium, according to astronomy and astrology experts."  Others think it is the first sign of the impending chaos that will peak on December 21, 2012.  A website I looked at states that "the combined gravitational effects of this alignment will wreak havoc with Earth's systems."

When I read that last one, I thought, "finally, a statement we can try to apply some science to!"  What would be the combined gravitational pull of those four planets, if they were in alignment?  Let's just look at the gravitational pull that would come from Jupiter, since it's the most massive planet (by far) and therefore should be the biggest contributor of this force.  I used Newton's law of gravitation, and the value given for the closest approach between Jupiter and the Earth (the time at which this force would be the greatest).  I calculated the force Jupiter would exert on a 1 kg mass on the surface of the Earth.  And I came up with a value of...

...one ten-millionth of a Newton.  For purposes of comparison, this is a hundred million times smaller than the force that the Earth itself is exerting.  As noted earlier, the contributions of Mars, Venus, and Mercury would all be significantly less than that.  So, I think we're safe from the alignment suddenly creating a gravitational imbalance that might cause people to trip over curbs or fall headlong out of their Barcaloungers right in the middle of Jersey Shore.

Of course, this hasn't stopped the talk.  Nor, apparently, has it stopped the aliens, who you would think would understand physics better given that they have interstellar spaceships, from trying to warn us of the presumed impending catastrophe.  A crop circle that appeared on Milk Hill in southern England, way back in June 2009, tried to warn us about the planetary alignment, but would we listen?  Nooooooo.  Here's a photograph of the crop circle: 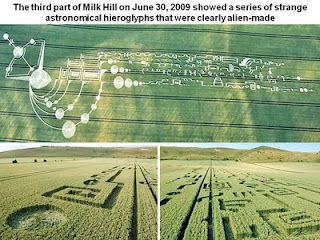 My favorite part of the caption is where they say that the hieroglyphs were "clearly" alien-made, since humans are obviously incapable of producing bunches of illegible marks.  (I think the next time one of my students submits a paper with horrid handwriting, I'm going to write on it, "I think you got help from superpowerful extraterrestrials on this assignment, as these are clearly alien hieroglyphs.")

Anyway, what this crop circle supposedly shows is a sextant and a schematic of the aligned planets, and was a portent of doom that the aliens were kind enough to provide for us.  I wonder what we are supposed to do with this information, however?  It's not like we can stop a planetary alignment, and getting out of the way is just a wee bit impractical.  So as an advance warning, it's a remarkably pointless one, a little like telling someone who has fallen off a cliff, "Watch out for the ground."

If you'd like for some reason to read the entire explanation of how that crop circle is an alien warning, go here.  Me, I'm done thinking about it.  I might get out my binoculars to take a look at the planetary lineup, but I'm not going to get all worked up about it.  I'm suspecting that the month of May will come and go without anything much happening, and the planets will come into alignment and wander away as they've done for millions of years, and no catastrophe will occur.  Unless you count the fact that Harold Camping and crew will still be around afterwards.
Posted by Gordon Bonnet at 2:43 AM