I spent an entire day (10 AM to 8:30 PM, with brief breaks for lunch and dinner) last weekend with a few friends, attempting to build a shed.  This was one of those prefab things that comes, disassembled, in boxes.  Each piece had a part number stamped on it, which we only found out after a rain shower was printed in water-soluble ink.  The instructions were in English.  Well, okay, at least the words were English.  The syntax of the instructions leads me to speculate that they were originally written in Hindi, and then translated into English by an elderly woman in Bangalore whose knowledge of English came entirely from watching One Life To Live on satellite TV.  It featured sentences like this:

"For to lining up the grommet flange (part number 9067) with the anterior gasket housing (part number 2134), make nice sure that corners balance!  Especially.  And the left plumb socket (part number 8660) shouldn't be in front of the ridge cap vent (part number 1852)!   For connecting with three very nice #12 bolts behind lock washers and acorn nuts, start from outside and working your way in."

Another fun feature of this shed was that you had to have the arm length, and climbing skills, of an orangutan to put the roof together.  The only way to get the roof panels attached was to set one in place, balance (belly down) on the top of a ladder, and reach forward as far as possible to screw the far end of the panel to the struts.  You were not supposed to put any weight at all on the roof panels, which were made of sheet metal with the tensile strength of Reynolds Wrap.  Because of the near-impossibility of assembling the roof while balancing horizontally on the top of a ladder without leaning on the panels, I left several dents in the roof from my hands, elbows, face, etc. 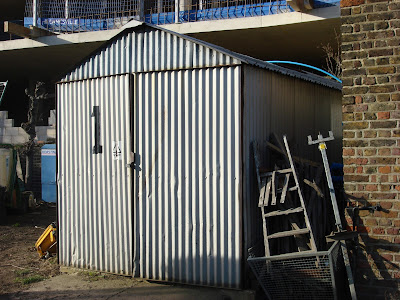 You would think at this point that I would have learned that my construction skills are, rated on a comparative scale, lower than that of many species of mollusk, and that I would simply refuse to take part in helping out with construction projects.  You would be wrong.   I seem to get myself involved in these enterprises all the time.  I nearly ended up in the local mental ward framing a room in my previous house, where (to save money) I had it built with an unfinished basement.  "No problem," I told the builder, in a breezy fashion.   "I'll finish it."  So I and a friend (should I mention that this is the same friend who owns the shed?) got together the following summer to frame in a room in the basement.  We decided to build the wall frames on the floor and then lift them into place, thinking that'd be simpler than assembling them while attempting to hold the lumber vertically.   It seemed a good idea until we discovered that (1) the diagonal length of a wall frame is greater than its height, (2) cement floors have very little flexibility, and (3) we should have paid better attention in high school geometry.  We finally got the wall frame in place with a sledgehammer.  At least we know it's in there solidly.  If there's ever an earthquake in upstate New York, and this house falls down, it will collapse around the wall, because that wall is definitely not going anywhere.

It was in this same room that I attempted to install a "floating floor."  For those of you unfamiliar with this home furnishing innovation, it's a substitute for tile and hardwood, which are both notoriously difficult to install.   "Floating floors" are strips of wood laminate, which lock together like Lego pieces. "It's a piece of cake," the guy at Home Depot told me.   "A kid could do it."

Well, if that statement is correct, I'm unlikely ever to participate on Are You Smarter Than a Fifth Grader? The assembly procedure required you to put together strips of the laminate, and then use clamps to keep them square as you added further rows.  After working on the project for several hours, I came to the conclusion that either the floor wasn't square or else one of my eyes was closer to the bridge of my nose than the other one, because every time I secured the clamp on one side of the room, the floor panels on the other side would pop out of square.  I said many, many bad words during the course of that day.  I finally did get the floor installed, though, and all I can say is: thank god for molding.  Whoever invented molding is a genius.   The guy at the lumber store looked at me a little oddly when I asked him if he had any eight-inch-thick molding, but whatever.   Maybe it'll be a New Trend in Interior Decorating.

So, anyway, all of this has left me in awe of people who are actually good at construction.   I mostly specialize in what my dad used to call "Do It To Yourself Projects."  I'm also good at carrying around heavy objects, giving advice, and helping out with the pizza and beer afterwards.  Just don't ask me to translate any directions written in Hindi.
Posted by Gordon Bonnet at 7:24 AM