The Red Menace of "Les Schtroumpfs"

It's been a rough year for cartoon characters.

First, we had a Muslim cleric ranting about how Mickey Mouse was an Unclean Agent of Satan.  Then, the Seal-the-Borders cadre began to howl that Dora the Explorer was an illegal alien.  Not to be outdone, the Catholic church contributed their own little piece of surrealism with the claim that the Simpsons were clearly Roman Catholics.

And now, Antoine Buéno, a university lecturer in Paris, is claiming that the Smurfs are communists.

1)  Did you know that the French for "Smurfs" was "les Schtroumpfs?"  I didn't.  I also defy you to say "les Schtroumpfs" without laughing.  It makes it even better if you say it with a fruity, Pépé le Pew accent.

In answer to the second question, let's look at his evidence:
Well, I think we all have to admit that as evidence goes, that's pretty freakin' persuasive.  When you add the fact that Brainy Smurf looks a little like Leon Trotsky, I think we have what detective agencies call "an airtight case."

Thierry Culliford, son of the late Pierre Culliford, creator of the Smurfs, is outraged, and referred to Buéno's thesis as "grotesque."  Pierre Culliford, who went under the pen name "Peyo," was "not political," his son told reporters.  "When there were elections, he would ask my mother, 'What should I vote?'"

Buéno, of course, dismissed that, saying that Peyo was expressing communist themes in The Smurfs "unconsciously."  Because all cartoonists do that, you know.  Even comic strips are not free from it.  For example, don't you think that "Nancy" in the comic strip of the same name looks like Kim Jong Il?  Let's compare: 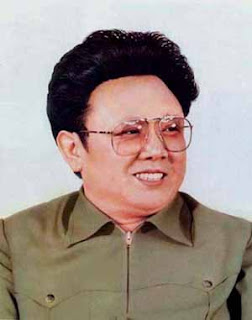 So, I think we can safely assume that cartoonists are unconsciously channeling all sorts of scary political themes in their work, and that from now on you should read the funny pages with that in mind.  Who knows what kind of dreadful political ideologies could be creeping into your subconscious while you're looking at "Marmaduke," "Blondie," or, god forbid, "Garfield?"

Buéno, for his part, is not backing down.  He says that his paper is "rigorous and thorough and documented."  About his claim of The Smurfs as having communist overtones, he told reporters, "It's so obvious I didn't think I'd have to spell it out."

So, anyway, there you have it.  Another tour de force from the halls of academia.  And we wonder why people think the members of the intelligentsia are a little bit cracked.
Posted by Gordon Bonnet at 2:31 AM