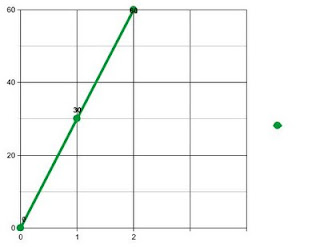 I then ask them to do a little mental math, and predict what the y-value will be when the x-value is 6.  I deliberately have not labeled the axes, and rarely does anyone ever ask me what the numbers mean, or even what their units are.

AP-level high school seniors are great at extrapolation, and without too much trouble they figure out that when x = 6, y = 180.  At that point I label the axes.

The x axis is "Time, in days."  The y axis is "Temperature of a frozen turkey left on the kitchen counter to thaw, in degrees Fahrenheit."  After the laughter dies down, I say, "So, this Thanksgiving, don't bother putting your turkey in the oven.  Just put it on the counter and wait six days, and it will cook itself."

This type of error is called a misextrapolation, or an "assumption of linearity."  We tend to assume that once we've seen a trend, the same trend will continue forever.  It's what has resulted in the "some is good, so a lot must be better" attitude some people have toward taking vitamin supplements, for example.

It's only one of several logical errors I saw in an article yesterday in The Register, called, "Earth May Be Headed Into a Mini Ice Age."  This article notes a recent decrease in sunspot activity (data presented from 2000 to 2010).  Whoever constructed the graph gamely drew a regression line through the data, all the way up to the year 2026.  The regression line crosses a dotted line between a region of the graph labeled "spots" and one labeled "no spots" around 2022.

Well, yeah, if the trend continues, that's true; but nowhere in the article do they mention that the regression line itself is a prediction.  A quick glance at the data would convince you that, yes, it certainly looks linear.  You will read the article in vain looking for a discussion as to why anyone is expecting that it will remain linear.

Then the whole thing gets even worse.  They tie a decrease in sunspot activity to a cold period between 1645 and 1715, a time in which "many European rivers which are ice-free today – including the Thames – routinely froze over, allowing ice skating and even for armies to march across them in some cases."  The author calls this the "Maunder minimum," or the "Little Ice Age," which is half right; actually, the Little Ice Age was the drop in temperatures that began in the 14th century, which froze out the Viking settlements in Greenland and was probably contributory to the spread of the Black Death.

Besides the misextrapolation, we have two more logical problems going on here.  The first is that tried-and-true error in thinking, "correlation does not imply causation."  That the Maunder minimum coincided with a decrease in sunspot activity is true; that the decrease in sunspot activity caused the Maunder minimum is hardly proven.  Also, there's a problem with sample size here; even if you accept that there is some sort of connection between sunspot activity and global temperatures, the link between the Maunder minimum and the 17th century sunspot minimum is a sample size of one.  Sunspots normally fluctuate in numbers on an 11-year cycle, and there is to my knowledge no corresponding cyclic fluctuation in global temperatures.  (There is apparently a weak correlation between average sunspot activity on the hundred-year-scale and solar irradiance, which could have an effect on climate; to read about this from a more authoritative source, go here.)

Then, after reading the article, I made it worse by doing what I should never do, namely, reading the comments.  This article brought the climate-change-deniers out of the woodwork, howling brilliant lines such as, "The sun has an effect on Earth's temperature?  Really?  Wow, these scientists are so smart!"  The whole thing comes from the usual problem; reputable scientists publish a paper (describing decreasing sunspot activity, suggesting that the sun is going into a magnetically quiescent state, and noting that a similar quiescent period coincided with the Maunder minimum).  This gets picked up by the popular media, who then commit various acts of illogic upon it, give it a catchy, sensationalized title, and put it online.

It's no wonder that the general public mistrust scientists, given the generally poor understanding that they have of basic critical thinking combined with the crappy reporting that is typical of the popular media.  The danger is that this has turned scientists into Cassandras; they, better than anyone else, understand the problems we face, but when they talk, no one believes them.
Posted by Gordon Bonnet at 2:44 AM