Are you a recent college graduate with a major in political science?  Are you looking for a job, but afraid of the wheeling and dealing, smoke-filled-room culture that still pervades the political scene?  Would you like to learn how to apply your skills to dealing with tense situations that don't, technically, exist?

Then a career in exopolitics may be for you.

This whole subject comes up because of a headline that popped up in my news feed, "Do Aliens Get a Fair Deal in the Media?"  It turns out that the article was about a conference coming up in August in Leeds, England, on the subject of exopolitics -- how governments, militaries, and so on should be handling interactions with extraterrestrials.  My first thought was that the opening keynote address would read, in its entirety, "Um.  Well.  There haven't been any.  Thank you very much."  But no, the conference is going to go on for three days (August 5 through August 7), so they must be planning to say more than that.

So I started looking into it, and it turns out that the Leeds conference is only the tip of the iceberg, exopolitically speaking.  There's an Exopolitics Institute, whose website states, "Exopolitics is defined as an interdisciplinary scientific field, with its roots in the political sciences, that focuses on research, education and public policy with regard to the actors, institutions and processes, associated with extraterrestrial life, as well as the wide range of implications this entails through public advocacy and newly emerging paradigms."  Okay, then, that explains that.  Any definition that has that many subordinate clauses, and includes the words "newly emerging paradigms," has got to be taken seriously.

Then, there's Exopolitics.com, which seems to act not only as a focus group for studying exopolitical issues, but also as a clearinghouse for wingnuts, to judge by the following graph that is featured prominently on their website: 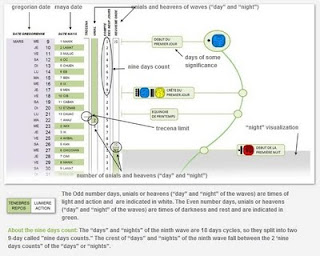 What does it mean?  Damned if I know.  But supposedly it proves that March 9, 2011 through October 28, 2011 are going to be part of the "Ninth Wave" and are going to be "Days of Significance."  We're in the middle of that period right now, and I'm not seeing all that much Significance happening around me personally, but maybe that's just because of where I live.

We also have Exopolitics Radio, a weekly radio talk show with a nifty home page; the Exopolitics World Network; and an Exopolitics Wikipedia page, which of course proves that it's all real.

Upon looking at all of this stuff, my first question is: how do these people pay their mortgages?  I mean, if I decided to chuck teaching biology and move on to, say, founding the Unicorn Research Institute, it's not like I could actually bring in any big research grants.  Who is paying these people?  Is it supported by the National Endowment for Woo-woos, or something?

Secondly, I wondered how the whole thing could last longer than a few months, given that there's effectively nothing there to study.  But some of these folks have been in business for over a decade.  Michael Salla, who coined the term "exopolitics" and has been one of its most ardent supporters, has tried to influence political leaders (to little apparent effect, except in the case of Michele Bachmann, some of whose statements are clearly beamed in from Neptune).  But then I saw that the exopolitics nonsense is all wound up with various conspiracy theories (HAARP, the Reptilians, the Bilderberg Group, the Illuminati) and other kinds of wingnuttery (UFOs, psychics, cosmic convergences, and, heaven help us, the Mayan calendar).  So, I guess they have a lot of material out there.  In fact, when the Washington Post interviewed Michael Salla, they maneuvered him into admitting with some reluctance that he was getting his information solely "from the internet."

So, anyhow, if you're going to be in England in the first week of August, you should definitely plan on attending.  It could be entertaining.  I'm guessing that black trench coats and sunglasses will be de rigueur.  You might also want to consider bringing along a tinfoil hat.

After all, you can't be too careful.
Posted by Gordon Bonnet at 3:51 AM