Good news for all of you East Coast cryptozoology buffs who thought you'd have to take a trip all the way to the Pacific Northwest to see something that probably doesn't exist:  we now have a very intriguing report coming in from rural South Carolina.

Some residents of Lee County heard an odd noise at night during the July 4 weekend, and went out to investigate.  They found that the front bumper of their car had been "clawed and chewed."  Well, that can only mean one thing.

Lizard Man is back.

When the owners of the munched car notified local police, some old-timers on the force noted the similarity of the story to reports from 23 years ago.  During a five-week episode in the summer of 1988, several people had their car bumpers scratched and mauled, and there were reports that the perpetrator of the damage was not some drunken vandal, but a seven-foot-tall lizard-like creature with red eyes and three clawlike fingers on each hand.

"This part here is how it all started in 1988," said former Lee County Sheriff Liston Truesdale.  "We got a call to come and look at something that had mauled a car.  I went out there and looked at that damaged car, and I haven't seen anything like that before."

Below is an artist's rendition of the creature by one of the witnesses: 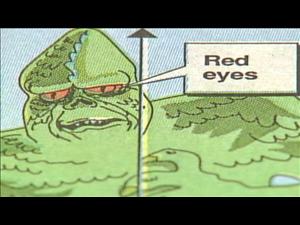 An especially nice touch is that the red eyes are labeled, because otherwise we very likely wouldn't have noticed them.

In any case, speculation is running rampant.  Who is this strange creature with scaly skin and a taste for chrome?  The two chief theories are that Lizard Man is (1) an alien, or (2) a dinosaur.  Of course, it could always be (3) an alien dinosaur.  As evidence, let's look at this picture of a Gorn from Star Trek: 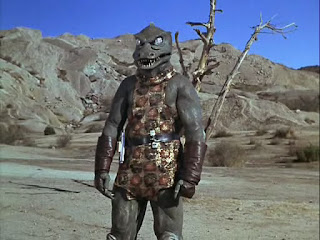 That's pretty close, don't you think?  I remember this episode mostly because it had the clumsiest, most ridiculous fight scene in the entire series, and there was some serious competition in that regard.  The problem was, the actor playing the Gorn was wearing this big plastic dinosaur head and it seemed like he couldn't see where he was going very well.  He kept lunging at Captain Kirk with his knife, and Kirk would do a slow-motion dodge and roll, and the Gorn would miss him by about twelve feet.  The Gorn would then go staggering off blindly, take about five minutes to relocate Kirk, and the whole thing would begin again.  It was sort of like watching an extremely slow-moving two-person game of Marco Polo.

But even so, I think the similarity between the Gorn and the South Carolina Lizard Man is pretty striking.  Of course, I don't recall the Star Trek episode mentioning anything about the Gorn race liking to eat car bumpers, but that may be because the scriptwriters had to concentrate on more important things, such as giving Kirk an opportunity to get his shirt ripped off.

In any case, we'll be watching Lee County, South Carolina pretty closely in the coming days.  It's to be hoped that someone will get a photograph or video clip of this creepy chrome-crunching cryptid creature before he packs it in for another 23 years.  One bit of advice: if you decide to visit Lee County to try for a sighting yourself, you might want to rent a car.  Don't waive the comprehensive damage insurance.
Posted by Gordon Bonnet at 2:56 AM