I am the vine

We've had people seeing Jesus on tortillas, highway underpasses, grilled cheese sandwiches, fogged windows, pizzas, flaking paint on a barroom wall, a piece of tarnished sheet metal, and the wood grain in a cut tree trunk.  But this is a new one, in my experience -- people are seeing Jesus in a bunch of kudzu vines hanging on a utility pole.

A fellow named Kent Hardison, who works at Ma's Hotdog House in Kinston, North Carolina, drives past this utility pole every day to work.  He noticed that kudzu, the invasive vine that is sometimes called "Mile-a-Minute Vine" because of its ability to grow fast enough to completely cover barns, abandoned cars, and slow-moving farm animals, had grown up the pole and was now hanging from the wires.  At first, he thought that he should contact the county maintenance people and tell them to get in there and spray it with RoundUp.  But then, he suddenly realized something that made him stop in his tracks.

“I glanced at it, and it looks like Jesus on the cross,” Hardison told reporters.  “I thought, ‘You can’t spray Jesus with RoundUp.’”

Hardison told some of his friends and coworkers, and soon the place was flocked with people who wanted to take a look.  While a few scoffed, most seemed impressed.

“Maybe it’s a sign of the times,” Kinston resident Michelle Davis said.  “There’s been a lot going on in this area.  I think it's a sign that Jesus is watching over us.”

Hardison agrees, and mentioned, in a comment that I swear I'm not making up, that kudzu was actually an appropriate medium for the Lord and Savior to express himself.  “It doesn’t matter what you do, kudzu is going to be around,” he said.  “Ain’t that a lot like Jesus?”

I bet by now you're just dying to see what this apparition looks like.  So I found a photograph someone had taken of it and posted online, and here it is: 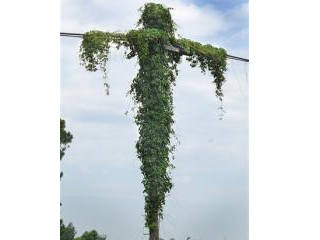 My overall reaction is:  *shudder*  I'm not seeing a resemblance to Jesus, To me, this looks more like a monster from an episode of The X Files, reaching out its hungry tendrils to wrap around your neck and strangle you.  I don't quite see how it could inspire anyone to devotion.  But of course, the last appearance of Jesus on a grilled cheese sandwich looked more like Bob Marley than it did like Jesus, so I guess there's the whole eye-of-the-beholder thing.

But even so, the pious residents of Kinston have thus far prevented maintenance crews from breaking out the herbicide.  There have even been small gifts left at the base of the pole, along with little notes with prayers.

My thought is that at least it gives the devout a hobby, and keeps them distracted from their efforts to reinstitute prayer in public schools.   So I suppose it's harmless enough.  You have to wonder how they'll react, though, when winter comes, and it all dies after the first hard frost.  I guess they'll have to look elsewhere for their devotional images.  I predict an upsurge in orders at delis for grilled cheese sandwiches.