It's been a busy few days for those of us who like to keep track of the activities of monsters that probably don't exist.

First, we have a report from Auckland, New Zealand, where a swamp monster is threatening a multi-million dollar railway tunnel project.

So Wilcox and others have proposed to the City Planning Board that they have ceremonies to placate the Taniwha, which are local deities who (if they are happy) might intercede with the Horotiu and prevent him from wrecking the trains.

So, what we have here is that city administrators are being asked to placate invisible, mythical entities, so that they will intercede for them with another invisible, mythical entity.  I'd go further into this, but I'm sensing some thin ice here, given that my grandmother used to pray all the time to St. Jude, asking him to pass along her messages to Jesus.  So I'll just move along to...

Evidently deciding that the summer heat in Texas and New Mexico was just too much, our friend EC has decided to pack his bags and head to cooler climes.  And true to his name ("Chupacabra" means "goat sucker") he has begun to exsanguinate Siberian goats, which are three words I bet you've never seen used in the same sentence.

The English language version of Moscow News reports that livestock owners near Novosibirsk have found numerous goats dead, and drained of blood through puncture marks in the neck.  No one has seen the wily creature, but of course parallels to alleged attacks in the United States were immediately drawn.

“If this creature is not stopped it could make its way to Novosibirsk! Only our police force are doing jack-diddly about it,” complaining locals told reporters for Komsomolskaya Pravda.  “They say that there is no Chupacabra. Come if you will journalists, have a look at what is happening to us.”

The most remarkable thing about this, in my opinion, is the use of the word "jack-diddly" in a Russian news report.  I wonder what the Russian word for "jack-diddly" is?

The people of the village of Tolmochevskoye, where the attacks took place, decided that an appropriate course of action was to ring all the church bells, and organize night patrols.  So far, the approach seems to have worked, and there have been no more reports of dead goats.  The Moscow News concludes by saying that at least "the beast has turned out to be a boon to troubled parents, presenting a very useful threat for naughty children."

So, there you have it.  New Russian parenting strategy:  "Eat your borscht, or I'll throw you outside and El Chupacabra will get you."

From the chilly tundra of Siberia, we move along to the even chillier oceans surrounding Antarctica, where we have reports of an aquatic humanoid called a "Ningen."  Supposedly, the Ningen is all white, with huge eyes and a torso that ends in a mermaid-like tail.  Below we have what is alleged to be a photograph of a Ningen: 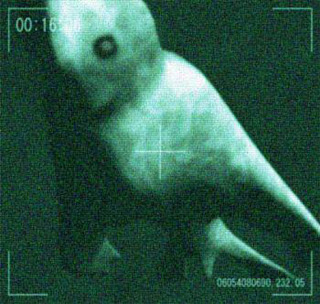 Interestingly, the whole Ningen thing apparently started much the way that Slender Man did, with some posts on an internet forum.  People read them and reposted them and elaborated on them (and did some fancy Photoshop work on their own accord), and now we have Ningen reports coming in from as far away as coastal Namibia.  (These being undoubtedly sightings of the rare African Crested Ningen.)

A YouTube video (here) goes into the photos and video clips that are alleged to be Ningens.  What strikes me as curious is how bored the narrator sounds, which is kind of weird given that he evidently believes they exist.  Myself, if I discovered evidence of scary mermaid-things in the ocean, I'd actually be excited enough to have at least some minor vocal inflections.

In any case, I have to admit, real or not, they're kind of creepy-looking, with the giant eyes, and pasty white skin.  I think they'd make excellent minions for Cthulhu, don't you?

And that's the Monster Round-Up for today: albino mermaids, swamp monsters, and El Chupacabra visits Siberia.  As always, we'll be waiting for hard evidence confirming these reports to turn up.

Unfortunately, thus far there's been "jack-diddly."
Posted by Gordon Bonnet at 4:43 AM