Aliens from the planet Kitsch

We arrived back home Saturday evening from visiting my cousins in Las Cruces, New Mexico, and my wife's uncle and aunt in Santa Fe.  Our day of travel, from Albuquerque to Atlanta to Detroit to home, was uneventful despite the presence of Hurricane Irene spinning off the Atlantic coast, but I awoke to wind and rain Sunday morning, and lost power at 10 AM, and it was out for most of the rest of the day.

In any case, New Mexico was beautiful, and our visits were great fun, and as an added bonus we took a detour on our way from Las Cruces to Santa Fe to visit...

Admit it, you knew I would.  Our mood was set by passing through the White Sands Missile Range on the way up, and seeing the "No Trespassing!  Military Facility" signs, with their cheerful deadly-force-authorized small print, all along the highway.  My wife also noticed that every entrance was guarded not only by soldiers, but by a white SUV with tinted windows, occupied by guys in dark suits.

It's the guys in dark suits that always worry me.

So, we arrived in Roswell in the appropriate frame of mind.  Our first stop was the "Alien Zone," an amazingly kitschy shop/museum (of sorts) with all manner of alien-themed merchandise.  I bought two t-shirts, and a poster for my classroom.  The poster shows a twisty-faced alien framed by the words "ROSWELL, NEW MEXICO" and is sure to further cement my students' opinion that I've lost my marbles.  Then we visited "Area 51," in the back of the shop, which had a multitude of interactive photo opportunities, one of which I have included below. 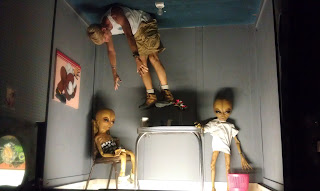 And you thought that the Law of Gravity was strictly enforced.

After our visit to the Alien Zone, we went over to the International UFO Museum, which took itself much more seriously.  It had a really nice display of the Roswell Incident, with newspaper clippings, photographs, and transcripts of interviews with the major players.  It then went on to other UFO-related incidents (there was a whole panel about the Betty and Barney Hill "abduction").  The crop circle display lost it a few credibility points, in my eyes, but on the whole, it was fairly well done.

I did think it was funny, however, that even in the International UFO Museum, they seemed uneasy about the complete lack of hard evidence.  On more than one panel were phrases like, "... a visitor from another planet?  Or a hoax?  You decide."  This sort of thing always makes me mutter under my breath, "Okay, I will."  You'd think that here, of all places, they'd come right out and say, "Yup, it was an alien spacecraft."  The fact that even they hemmed and hawed about the whole thing was a little disappointing.  I felt like saying, "C'mon, guys, take a stand, for cryin' in the sink."

But on the whole, it was a fun experience, although we didn't see a UFO or get abducted or anything.  Which, frankly, was a little disappointing.  There we were, in the desert, giving the aliens and the Men In Black every chance to prove me wrong, and they just let us zoom on by.

It's funny, isn't it, how skeptics and scientists never get abducted?  If I were an alien, I'd want to have a chat with the smartest brains on the planet.  The first people I'd abduct would be Michio Kaku and Neil de Grasse Tyson, who are not only brilliant but are as funny as hell, and we'd sit around and each have a nice glass of single malt Arcturian Firewhiskey and talk about the universe.  Evidently, however, the aliens don't think that way.  I saw a t-shirt to that effect in the "Alien Zone:"  "If aliens are so smart, why do they always abduct the dumbest people on the planet?"

Anyhow, we had a good time in Roswell, and I recommend a visit if you're ever in the US Southwest.  If you go, make sure to stop by the Alien Zone and the International UFO Museum.  They're worth checking out - if for no other reason, for the humor value.  And do watch out for those Men In Black.  They looked way scarier than the aliens, who were mostly unarmed and in any case seemed to be made of rubber.
Posted by Gordon Bonnet at 3:38 AM