One of the things that bugs me the most about the supernatural view of the world is that it's taking the easy way out.

Natural, scientific explanations are hard.  That's why people study all their lives to learn how to do good science.  Even to read one of the popular journals about science -- Discover, say, or Scientific American -- means you have to commit yourself to exercising your brain a little, training yourself to think critically, learning a few new vocabulary words.

The woo-woos of the world take the easy way.  They specialize in a lexicon that I call "Sort Of Sciencey Or Something."  The words sounds scientific enough -- energy, field, vibration, frequency, dimension -- but when you press them, it turns out that even they aren't able to give a good definition of what they mean by these terms.  They throw in glancing references to actual science (quantum mechanics is a particular favorite) and it gives them the good, glowing feeling of being Sort Of Sciencey Or Something, which is often enough to sell whatever product they're hawking to the gullible.

Natural explanations aren't always technical and hard to understand, mind you; but they do require you to look beyond the easy answers of attributing things to Psychic Vibrational Energy Fields, and force your brain to think skeptically.  Witness, for example, the crop circle that appeared in Wiltshire (England) last week. 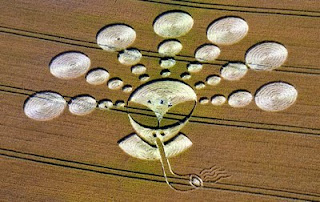 Visitors to the site generally attributed the latest addition to the Crop Circle Artists' Portfolio to the usual things -- mostly aliens.  Janet Ossebaard, a Dutch crop circle woo-woo extraordinaire, stated, "This wasn’t made by people, otherwise you’d see damage from board marks.  It’s been hit by a plasma vortex.  You can see the burn marks on the crops and cavities.  We also found a half-fried caterpillar. This is a vortex that has been intelligently guided — and not by hoaxers."

Well, Ms. Ossebaard, I'm afraid that you might want to reconsider your "plasma vortex" theory.

Professor Richard Taylor, a physicist at the University of Oregon, was able to replicate exactly this sort of damage -- and mimic crop circle patterns -- using a magnetron, a device made from the innards of a microwave oven, and powered by...  a 12-volt battery!

In an article in Physics World, Taylor describes how he used a magnetron to "cook" the bottom of plant stems, causing them to fall over and cool in place -- creating the "bent, not broken" hallmark of crop circles that woo-woos have made such a fuss about.  With a magnetron and a hand-held GPS, Taylor says, you could make a crop circle of a size and level of complexity that would only be limited by the number of hours in a night.

So, there you have it, folks: a nice, plausible, natural explanation, with no recourse necessary to "plasma vortexes" or the like.

Note that I'm not saying that every crop circle was made this way.  But that's the great thing about scientific explanations; you find a straightforward, plausible explanation, that accounts for all of the known facts in a given case, with the full knowledge that the next case might require a different explanation.  The woo-woos' determination to make things like this into some huge mystical deal (The Aliens Are Trying To Communicate With Us) leaves them instead having to answer a number of troubling questions, the most important of which is: Why would an alien intelligence using a "plasma vortex" to carve an image into a wheat field choose to depict an alien smoking a pipe?
Posted by Gordon Bonnet at 4:20 AM