New from the Bizarre Ways To Spend Your Time And Money department, we have:  yoga classes for dogs.

Predictably named "doga," this trendy practice is apparently catching on like crazy.  Suzi Teitelman, a doga instructor from Florida, offers classes, DVDs, and a training manual, and has trained over a hundred people to be doga instructors themselves.

"We chant together to feel the vibrations, then we start moving into twists and turns," she said.  "The person takes dog deeper into a stretch, and the dog takes the person deeper.  If you have a dog on your arm in a standing posture it helps balance and strength." 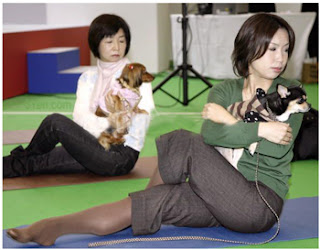 Note the dog breeds in the above photograph.  All of the photos I've seen show people holding small port-a-dogs like miniature dachshunds, Pekinese, Pomeranians, and toy poodles.  No one ever seems to be holding, say, a rottweiler, which I think would be a much greater challenge to your balance and strength.

Teitelman believes that there are benefits to the practice for both human and dog.  "You're moving their body. They're getting touched, they're getting love," she explained, "and everybody needs to be hanging upside down."

And yes, that is a direct quote, the last part of which leaves me at a loss as to how to respond.

Dr. Robin Brennen, a New York City veterinarian, is an enthusiastic supporter of doga, and notes that in a class she attended, by the end of the class all the dogs were in savasana (the final resting pose).  I.e., they were asleep.  My dogs would probably fall asleep, too, if they were stuck for an hour in a room with a bunch of people chanting and stretching and assuming weird poses, and not engaging in any sensible kind of activity, such as throwing a frisbee or tennis ball or playing tug-of-war with a rope toy.

Teitelman states that the practice isn't just helpful for dogs, but can be applied to other kinds of pets, too.

"It definitely works with cats," she said, "and when I do 'downward dog' my bird comes over."

I'm skeptical about the cats, frankly.  I've witnessed my own cats doing a special solo feline yoga pose, the Lick-Your-Own-Butt asana, but it's hard to imagine them cooperating with a human + cat yoga routine.  I can't see myself trying to hold on to one of them while, for example, standing on one leg.  And hanging one of my cats upside down would be a recipe for a trip to the emergency room for stitches.

Please note that I have nothing whatsoever against yoga, per se.  It's a wonderful regimen for toning, stretching, and building stamina, even if I don't exactly subscribe to a lot of the spiritual trappings that tend to surround it.  But dogs?  Really?  It makes you wonder what the next pet-related woo-woo fad will be.  Homeopathy for dogs with illnesses?  Using crystals and flower essences to assuage your dog's anxieties?  Astrology for dogs?  I bet there are people out there who would happily buy into any or all of these.

The possibilities are limitless, as long as the money is.
Posted by Gordon Bonnet at 4:09 AM