"The Sun Pyramid" and the invention of truth

I keep thinking that I've heard of every crackpot idea out there, that we must have reached the end of the litany of bizarre ideas the human brain is capable of devising.

I keep being wrong.

Yesterday, a student of mine asked me if I'd ever heard of the conjecture that the ancient Egyptians had built some pyramids in Bosnia.  I hadn't, and after a little research, I found that there's a whole subset of woo-woo-ism that I was unaware of.

Northwest of Sarajevo, near the town of Visoka, stands Visočica Hill.  It's clearly a pretty strange-looking hill; vaguely pyramid-shaped, with unusually flat sides and a pointed top, it certainly suggests a man-made structure.  However, a geological team, led by Dr. Sefjudin Vrabac of the University of Tuzla, concluded that it was a natural structure, composed of clastic sediments dating from the Miocene Era.  Vrabac states that however odd it appears, Visočica is not a unique geological form, and that "there are dozens of similar morphological formations in the Sarajevo-Zenica mining basin alone" 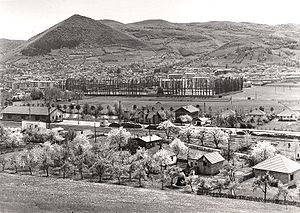 So, clearly, we are dealing here with something like the Giant's Causeway of Ireland -- a structure whose peculiar regularity suggests human construction, but which actually has a completely natural explanation.

All of which follows a well-known principle of scientific research; if your data doesn't fit your theory, alter the data.

People like Osmanagić rarely just spout off their theories alone, though; they always try to draw others in.  An especially common technique is to claim support from legitimate researchers in the field.  Many of these researchers are quite surprised to find their names mentioned in connection with some crackpot theory or another, but that never seems to discourage the woo-woo from making the claim.  In this case, the unlucky victim was Zahi Hawass, noted Egyptologist and former Egyptian Minister of State for Antiquities Affairs.  Osmanagić claims that Hawass supports his "theory," and in fact recommended an expert to work with Osmanagić's team, Ali Abdullah Barakat.

Poor Hawass responded by denying any involvement whatsoever, and in fact said that he'd never been contacted by Osmanagić, and in any case "Barakat knows nothing about pyramids."  But that hasn't stopped Osmanagić from repeating the claim.

Now, with all of this, you'd think people would be ignoring Osmanagić into obscurity, wouldn't you?

Two weeks ago, Osmanagić was the keynote speaker at the International Metaphysical Conference, in Little Rock, Arkansas.  His talk was packed -- over 500 people attended his lecture on the "energy fields" and "underground labyrinth" at Visočica.  And at the end, he got a standing ovation.

I find all of this incredibly discouraging.  Don't these people ever question their assumptions, consider bias, look at evidence?  The answer, sadly, appears to be "no."  A theory that makes people say, "Wow, it would be cool if that were true," plus a charismatic speaker, plus scattered references to scientific principles and other scientists, is all it takes to convince, and after that the idea is no longer questioned.  Then, once it becomes ensconced in a critical mass of brains, it takes on a life of its own -- a Google search I did for "Bosnian pyramids" had over ten thousand hits.  It becomes some weird variant of "truth" -- an idea so widely reported, and cited, that for many people it is no longer subject to the usual standards for assessing validity.

And it all reminds me of a quote from David Babenkian:  "Trying to argue with someone who doesn't understand the principles of scientific induction is like trying to play Beethoven's Fifth Symphony on a ukulele."
Posted by Gordon Bonnet at 2:54 AM