We here at Worldwide Wacko Watch are following several interesting stories this morning.

First, we have news that a poltergeist in Harborne, Birmingham, England is apparently showing himself to be a serious wine snob.

Anne Tyler, manager of the Court Oak Pub, has reported that once again, there was damage to a number of wine bottles on Halloween night, and that this has happened every Halloween for the past few years.  Nuala Gallagher, spokesperson for Sizzling Pubs (the chain that includes Court Oak), says that both staff and patrons have seen the figure of a fifty-something man behind the bar, and that these appearances are often followed by bottles of wine getting smashed.  "It's always the house red and house white," Gallagher said.  "If the pub has a house wine that is not to his liking, he makes his feelings known by smashing bottle after bottle of it in the cellar until it is changed for a wine he approves of."

As a result, the poltergeist has been named "Corky."  If I were him, I think that alone would make me want to break something.


Next, from the "Third Time's The Charm" department, we have news that Harold Camping has retired.

The evangelical minister and owner of Family Life Radio, Inc., made headlines for not one, nor two, but three failed predictions of the Rapture.  When the Rapture once again did not occur on October 21, Camping was dismayed that the Righteous hadn't been assumed into heaven and the rest of us left behind to suffer indescribable torments as Satan turned us into Human McNuggets.

Ultimately, Camping still hedged about the non-event, saying that the postponement of the Rapture was because it was "God's will."  "He could have halted the whole thing if He had wanted to," Camping said in a prepared statement issued last week.  The disappointment comes through loud and clear, doesn't it?  If you've spent all these years looking forward to Rivers Running Red With The Blood Of The Unrighteous, it's kind of a letdown when there's nothing in the rivers but plain old water, day after day.


Now that we've made it past October 21, however, we can look forward to yet another forecast of planet-wide destruction next Friday, on November 11.  This prediction comes from Uri Geller, who is probably the only person in the world who would beat Harold Camping in a People Who Just Don't Know When To Quit Contest.  Geller, you might recall, is the Israeli "psychokinetic" who conspicuously failed to bend any spoons on the Johnny Carson Show, and who was the first fake psychic to trot out the "Your Disbelief Is Interfering With The Mystical Energies" argument.  Geller is still going strong, decades later, and now has left behind bending spoons and moved on to bigger things, namely, the destruction of the planet.

Geller has posted a rambling, incoherent article on his website (read it if you dare, here) about how magical things will happen on 11/11/11, perhaps at 11:11 AM.  All those ones have to mean something, right?  It can't just be that passing through 11/11 happens to be the most convenient way to get to 11/12.  Don't be silly.  And note that all of these numbers made of ones can also be read in binary!  And string theory proposes that space contains eleven dimensions!  And prominent physicists Brian Greene, John Schwartz, and Isaac Newton all have eleven letters in their names!  And 1111 x 1111 = 1234321, which is kind of like a pyramid, which means that the ancient Egyptians are somehow involved!  Well, I think we can all agree that this can only lead to one conclusion:

On November 11, a portal to another universe will open, and the Earth will be sucked in.  This will, depending on how we react, destroy civilization as we know it, or else will lead to a "spiral of evolution."  Whatever the hell that means.

All I can say is, the guy's got balls even to show his face in public, after what happened on Carson, much less to go around prognosticating about cosmic death portals.


Speaking of balls, our final story comes from Glasgow, where The Telegraph reports that a man with a testicular tumor generated a stir when he went in to the hospital to have the thing examined.  The doctors performing the ultrasound were alarmed when they saw, on the ultrasound, the following image: 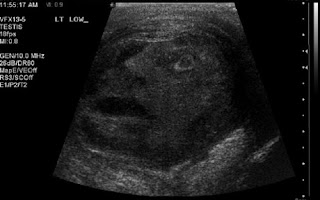 The doctors proceeded to have a brief consultation to determine if this was a message from an evil spirit, similar to the way Jesus likes to communicate with the faithful by appearing on tortillas.  They decided that no, it wasn't some kind of screaming testicle demon, and they removed it.  (As a brief aside, weren't "The Screaming Testicle Demons" a 90s death metal band?  If not, they should have been.)  Fortunately for the patient, the tumor turned out to be benign, and he's recovering nicely.


So that's it for today's news briefs: snobbish poltergeists, two separate predictions of the end of the world, and Edvard Munch's The Scream shows up on some Scottish guy's balls.  As always, our motto here is "All The News That's Fit To Guffaw At."
Posted by Gordon Bonnet at 2:33 AM