Here at Worldwide Wacko Watch, we're keeping an eye on a trio of developing stories.

First, from Peru, we have a report that anthropologist Renato Dávila Riquelme has discovered the skeleton of a twenty-inch-tall "mysterious being" whose "odd, triangular skull is nearly as long as it is."  Here's a photograph of the skull (photo courtesy of Peruvian news agency RPP): 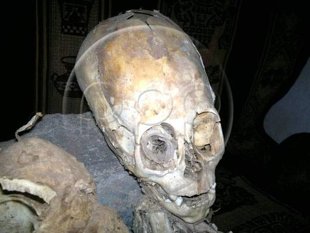 Dávila Riquelme isn't talking, but RPP has interviewed several anonymous Spanish and Russian scientists, who have identified the skull as having belonged to an alien:


It has a non-human appearance because the head is triangular and big, almost the same size as the body. At first we believed it to be a child's body until... doctors came and confirmed that, yes, it's an extraterrestrial being.

Because, obviously, doctors have a great deal of experience with extraterrestrials, and are qualified to identify an alien skull when they see one.

Me, I'm not so sure.  Given the range of peculiar birth defects out there, I'm banking on it belonging to a child with a severe skeletal abnormality, who died very young.  Tragic, but not evidence of spaceships.


All of which will come as a grave disappointment to a Ukranian man who appeared at city hall in Odessa, dressed up as Darth Vader and demanding a plot of land on which he could park his spaceship.


"I am Darth Vader," he told three guards, who looked at him as if he had lost his mind, which given the circumstances was probably pretty accurate.  "I heard that land is being carved up in the city of Odessa, and that many deputies, city administration, and the mayor have joined the Dark Side.  I have come for my parcel of land for the spaceship."
Lord Vader's appearance seems to have been triggered by Odessa mayor Eduard Hurvits' controversial decision to offer plots of land in the area to citizens of Odessa for free as long as they agree to build houses.  Evidently the policy created a Strong Disturbance In The Force, and Lord Vader had no choice but to come to Earth to kick ass, requiring him to find a place to park his space shuttle.
Odessa City Hall spokesperson Anna Osipchuk was not amused.  "We are not on the Dark Side," Osipchuk said.  "There are only Princess Leias here."  Which is almost as baffling a statement as Lord Vader's was.  Maybe she was referring to the peculiar hairstyles favored by Prime Minister Yulia Tymoshenko: 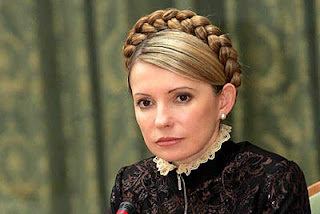 Which, to my eye, is still better than the Earmuff Braids worn by Princess Leia in the first Star Wars movie.
Our last story will undoubtedly cheer up Lord Vader after his being rebuffed in the Ukraine.  Scientists at CERN have reaffirmed the findings from earlier this year, that neutrinos appear to be capable of traveling faster than the speed of light.  Scientists are still being cautious, however, as well they should be.  Fernando Ferroni, president of the Italian Institute for Nuclear Physics, said:

A measurement so delicate and carrying a profound implication [for] physics requires an extraordinary level of scrutiny.  The experiment OPERA (Oscillation Project with Emulsion Tracking Apparatus), thanks to a specially adapted CERN beam, has made an important test of consistency of its result. The positive outcome of the test makes us more confident in the result, although the final word can only be said by analogous measurements performed elsewhere in the world.

At this point, I'm sure you have the same question I do, namely: why is it "OPERA" and not "OPETA?"  It turns out that every time I've seen this experiment written, they write it as Oscillation Project with Emulsion tRacking Apparatus, which puts me in mind of Calvin & Hobbes' anti-girl club GROSS (Get Rid Of Slimy girlS).  Be that as it may, this reconfirmation of the earlier measurements came as a surprise to me -- as soon as I heard about how this finding was going to demolish relativity, my immediate reaction was, "I doubt it."  But physicists are doing exactly what they should do -- carefully reexamining the experiment and its findings -- and so far, OPERA (or OPETA) has held up to scrutiny.

This, hopefully, should give some much-needed encouragement to Darth Vader, and reassure him that his spaceship can, in fact, achieve hyperdrive when he returns to the Death Star.  And when he goes, I'd like him to take that alien baby skull along with him, because that thing is creeping me out.
Posted by Gordon Bonnet at 4:30 AM