Baby supervillains, faces in the clouds, and a non-mammoth

First, we have the strange case of the woman whose sonogram indicated that she is soon to give birth to Venom, one of the villains from Spiderman.

Perhaps even more unortunately, however, her husband is the Redditor who goes by the name of OzLebowski, so the first thing he did was to post it on the internet.  Here we have a side-by-side comparison of the Bundle o' Joy, and the evil, brain-eating supervillain: 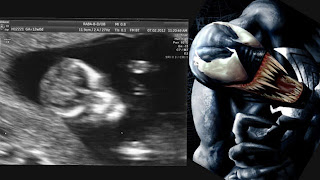 Myself, I suspect that when his wife finds out about this, OzLebowski may have more to worry about than the upcoming birth of a fanged alien.  But that's just judging by how my wife would have reacted had it been me who posted the side-by-side pics.


Speaking of wacky examples of pareidolia, we next have the case of Brisbane (New South Wales, Australia) resident Gerry Wells appearing in the clouds to bid a fond farewell to his family.  Fortunately for all concerned, a photographer was able to snap a photograph of Mr. Wells' parting shot.

Mr. Wells died of a heart attack on January 24, and I have to admit that the cloud photograph does resemble him a bit.  Let's take a look: 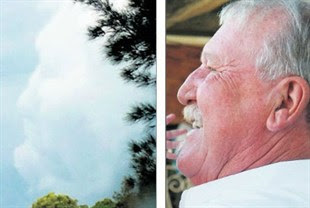 The only problem is, the cloud photograph was taken on January 9, fifteen days before Mr. Wells' death.  But Mr. Wells' sister, Marion Dawson, is undaunted.  Her brother, she says, was flying home to Brisbane from Sydney when the photograph was taken, and therefore it can't have been a coincidence.  "Someone greater than us knew what was about to happen," she said.  She also said that when she saw the photograph of the clouds, which was published in a local newspaper, she got "goosebumps."

The family used the photo in leaflets handed out at the funeral.

Well, I have to admit that some cases of pareidolia can be pretty freaky, and this one certainly would have given me the shivers, had I been one of Mr. Wells' friends or relatives.  Be that as it may, I don't think we have any before-the-event appearance of Mr. Wells' ghost in the clouds -- it's a chance resemblance, however much it might appeal to think otherwise.


Which is more than we can probably say for our last story, which is the alleged appearance of a woolly mammoth in Siberia.

If you haven't already seen this video, you can go here to take a look.

At first, I have to say that I was intrigued.  There's nothing scientifically impossible about a large mammal going undetected in the vast, trackless birch and spruce forests of southern Siberia; and there have been other claims of sightings of mammoths before.  The video, which was allegedly taken by a Russian engineer surveying for a road, is undeniably blurry, but it was supposedly shot "from a long way away."  Some viewers noted the possibility that the animal was simply a bear carrying a large fish, but there's something about its outline that strikes me as unbearlike.

So anyway, I was at least prepared to admit it into evidence.  Until, that is, I began to look into who had publicized it.  Turns out the video was brought to light by one Michael Cohen.  You might not recognize his name, but he's the one who was behind the photograph of the alien in the Brazilian rainforest taking a piss behind a tree (you can see my post about the claim, and the photograph of the pissing alien, here).

He also bills his website as the "world's only intergalactic news network."

So to say that his credibility is nil is putting it mildly, and I'm officially retracting my support from the woolly mammoth hypothesis.  It's kind of a shame, really, because it'd be pretty cool to have those guys back.  As long as they didn't take to stomping around in my vegetable garden.


So anyway, that's it for today -- a woman pregnant with an alien supervillain, a face in the clouds, and what is probably not a woolly mammoth.  More news from the world of the weird, just to prove to you that there's still work to do out there in the critical thinking department.  Here at Worldwide Wacko Watch, we're doing our best to ferret out the stories, so you can comfort yourself in the knowledge that no matter how odd people you know, there are some folks out there who are odder still.
Posted by Gordon Bonnet at 2:53 AM