After spending the last few days looking at such topics as the current US presidential race, the ethics of publishing teacher evaluations publicly, and the separation of church and state, let's get back to the issue that should be occupying the mind of every serious, concerned human being: lights appearing over Mayan pyramids.

It's kind of funny how lately, just mentioning the Mayans is enough to get you noticed.  This is becoming increasingly annoying to the Mayans themselves -- there are groups of Mexicans of Mayan descent, living primarily in the states of Campeche, Yucatán, and Quintana Roo, and with the exception of the few who are happy to have the money from woo-woo tourism, most of them just seem to be rolling their eyes.  In fact, one of them, Apolinario Chile Pixtun, spoke to reporters about the phenomenon, and was quoted as saying, "I came back from England last year, and man, they had me fed up with this stuff."

Well, Mr. Pixtun may be fed up, but let me tell you, the woo-woos are still starved for it.  Witness the following photograph, taken by Hector Siliezar, which was taken in 2009 but just hit the internet last week: 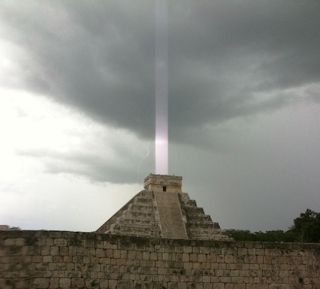 The photograph, which was taken while Siliezar and his family were on vacation, is of one of the pyramids at Chichen Itza.  A thunderstorm was coming, and Siliezar thought the pyramid with the dark clouds behind it would make a dramatic photograph, so he snapped several shots with his iPhone.  It was, he said, only after he looked at them afterwards that he saw what appeared to be a beam of light coming from the top of the pyramid.

It's unclear why he didn't make the photograph public until now, but be that as it may, he decided to release it a couple of weeks ago to what he calls "occult investigators."  And from there to every woo-woo in the world having multiple orgasms was only a short step.  For example, check out this article, which not only contains an interview with Siliezar and his wife,  but ends with the following hyperbolic quote from Schele and Freidel's A Forest of Kings: The Untold Story of the Ancient Maya:  "...As the Maya exploited the patterns of power in time and space, they used ritual to control the dangerous and powerful energies their [pyramids and structures] released.  There were rituals which contained the accumulated power of objects, people, and places when they were no longer in active use."

So, basically, they're implying that the beam is some kind of gigantic psychic carpet shock -- that all of the rituals and whatnot built up energy in the pyramid, and eventually it just discharged, and Siliezar was lucky enough to get it on film.

Predictably, I'm not buying it.  But that still leaves the question of what the beam actually is.  For that, let's turn not to an "occult researcher," but to a real scientist -- Jonathon Hill, research technician for the Mars Space Flight Facility at Arizona State University.  Hill, who specializes in image analysis, says that the beam is nothing more than a digital camera glitch.

What happened, explains Hill, is that Siliezar snapped the photo just as a lightning flash occurred, and the intensity of the flash "...caused the camera's CCD sensor to behave in an unusual way, either causing an entire column of pixels to offset their values or causing an internal reflection [off the] camera lens that was recorded by the sensor."  This created the appearance of a bright column on the image.  But how can he be sure of this?

Well, it turns out if you examine an enlarged copy of the image on Photoshop, you find that the beam is perfectly vertical on the image - not one pixel's variation.  I don't know about you, but that strikes me as pretty hard to explain if you think it's a photograph of a real beam of light.  It certainly struck Hill, who figured all this out, that way.  "That's a little suspicious since it's very unlikely that the gentleman who took this picture would have his handheld iPhone camera positioned exactly parallel to the 'light beam' down to the pixel level," Hill told reporters.

So, there you have it, not that it will convince the woo-woos.  In an interesting but clearly non-meaningful coincidence, I was just chatting with a student yesterday about what all the woo-woos are going to do when December 22, 2012 rolls around, and Quetzalcoatl hasn't reappeared, and our general take on it was that they'll just come up with some kind of bullshit recalculation of the date, and a few months later we'll have to go through it all again.  Because that is, after all, what it's all about -- being a woo-woo means never having to say you're sorry.
Posted by Gordon Bonnet at 2:41 AM