I try to be compassionate, I really do.  I mean, schadenfreude only gets you so far in life.  So when I read the news story a couple of years ago about the health food enthusiast who was giving a lecture on the dangers of high-carb diets in a local library, and while leaving her talk was hit and killed by a bakery truck, my laughter was tempered with a dose of sympathy for the victim and her family.

Sometimes, however, it's hard not to dissolve into guffaws at the misfortunes of others, particularly when they brought said ill luck on themselves.  And this brings us to today's story, from Kalispell, Montana, where a guy was killed while trying to create a fake Bigfoot sighting.  (Source)

The man, who has been identified as Randy Lee Tenley, 44, of Kalispell, was wearing a military-style ghillie suit.  What is a ghillie suit, you might ask?  I know I had to ask, because I didn't know.  It's a camouflage suit worn by snipers and other people involved in covert military operations.  But it's not your typical patterns-of-leaves type camouflage, the kind worn by hunters; it's covered with ropy fake vegetation.  Here's a picture of a ghillie suit from (I am not making this up) TheGhillieSuits.com: 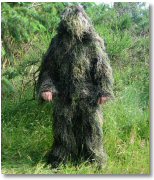 Which brings up two points: (1) this would only count as camouflage if your area has many human-sized furry lumps with arms, which would seem to limit its usefulness, and (2) there are enough civilians who actually want ghillie suits that there's a website that sells them?  I'm not sure that this last-mentioned isn't the scariest thing about this whole story.

Be that as it may, Tenley obtained a ghillie suit, and decided (possibly under the influence of alcohol, which seems likely) to stage a Sasquatch sighting alongside Highway 93.  So he donned his suit, and proceeded to run about along, and eventually on, the highway.  But evidently the ghillie suit's capacity for camouflage exceeded my expectations mentioned in the preceding paragraph, and Tenley was struck by a car.  He was thrown into the middle of the road, where he was struck by a second car, killing him.

I've always claimed that woo-woo beliefs were potentially dangerous, and by that I have usually been thinking about quack medical practices like homeopathy, which are sometimes sought out by people who are ill in place of treatments or remedies that actually work.  But here we see a case where a man was actually killed not because of his own woo-woo beliefs, but because he was trying to encourage others in their woo-woo beliefs.  All of which is rather ironic.

The upside, of course, not that Tenley will be around to celebrate the fact, is that this should be a clear contender for the 2012 Darwin Awards, a yearly contest whose prizes go out to the people who have taken themselves out in the stupidest possible fashion, thus improving the gene pool for the rest of us.  If Tenley isn't an odds-on favorite, I don't know who would be.

So, anyhow, that's today's story, the object lessons of which include the following: (1) running around in camouflage makes you hard to see, (2) if you jump into a highway, you're likely to get hit by a car, (3) staging Bigfoot sightings can be dangerous, and of course, (4) alcohol does not lead to clear decision-making processes.  So I think we can all thank Tenley for his bad example, and if this post has dissuaded one person from donning a ghillie suit and dancing on the highway, I think we can consider our time here well spent.

Posted by Gordon Bonnet at 5:19 AM