Curiosity finds a shoe, a finger, and various aliens

It was only a matter of time.

Ever since NASA's roving Mars explorer Curiosity sent its first photographs back to Earth, I've been waiting for some wingnut to use one of them to "prove" something -- that aliens live there, that a superintelligent race had visited there before, or possibly that the US has had a working base there for thirty years, and President Obama visited there when he was a teenager.

Enter the British YouTube aficionado who goes by the handle StephenHannardADGUK.  (I'm assuming his actual name is Stephen Hannard, which seems likely, so I'll refer to him by that name for the remainder of my post, and my apologies if this is incorrect.)  Hannard has analyzed the Curiosity photographs, examining them down to the last detail, and even applying various filters to them to see if anything is hiding, up there on the dusty Martian surface.  And lo, seek and ye shall find!  Hannard discovered:

An alien poking his head out of a burrow! 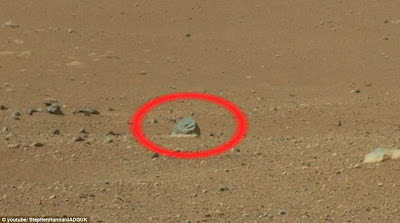 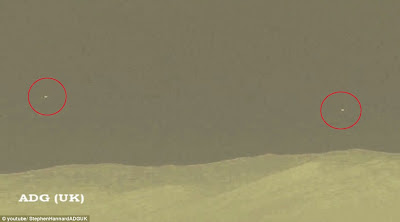 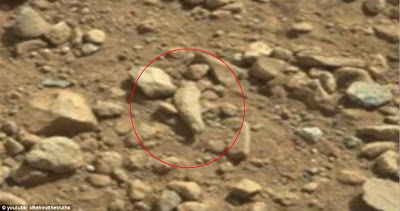 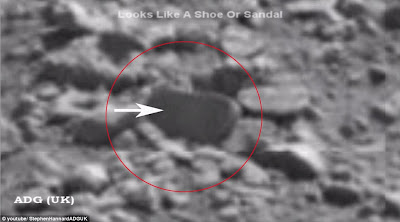 What is NASA saying about these photographs?  Predictably, they deny that anything weird is going on.  The "UFOs" are dead pixels in the camera's imager, which have lost function and therefore create a white dot on the image that was accentuated by Hannard's use of filters.  As for the grinning alien, the fossilized finger, and the shoe, those are... rocks.  Just plain old Martian rocks.

Hannard and others, however, beg to differ.  After telling us what we're looking at, Hannard concludes with, "What are these objects?... as always, you decide."  In other words, you're free to disagree, as long as you don't mind being a Credulous Fool Who Believes Everything NASA Says.  Of course that's what NASA spokespeople would say.  They're paid to cover stuff up, especially the top-secret covert stuff that's been going on out there on Mars.

Um, yeah.  That's why they've (1) sent a roving robot up there to take photographs of everything it can, (2) had it beam those photographs back to Earth, and (3) made those photographs public.  So if NASA is acting as a covert-operations unit, it might want to rewrite its protocol manual, because right at the moment its methods of maintaining secrecy kind of suck.

Also, if these really are evidence of the presence of aliens (or humans, for that matter) on Mars, I'd really appreciate it if they'd do a better job of cleaning up after themselves and not leave shoes and severed fingers all over the place.  The Earth has gotten mucked up enough with litter and pollution, let's not start doing the same to Mars, okay?

Anyhow, that's the news from the world of Ridiculous Outer Space Alien Conspiracies.  As usual, I'm pretty certain that my missive from the world of rationality won't convince anyone who isn't already convinced, but I feel compelled to post it anyway.  Just call me a Missionary of Skepticism, proclaiming my message to anyone who will listen, lo, even unto the Grinning Alien Groundhogs of Mars.
Posted by Gordon Bonnet at 2:48 AM