Boldly going where no one has gone before

One of the best things about science is that it is just so freakin' cool.  I think that's why I have never really understood aficionados of woo-woo; why do you need all the magic and quantum consciousness and chakras and ley lines and so on, when the real, verified science is so mind-blowingly amazing?

If you needed proof of that, consider the Alcubierre warp drive.  Yes, you read that right; warp drive, as in Star Trek.  Turns out that a Mexican physicist named Miguel Alcubierre proposed way back in 1994 that there might be a way to achieve faster-than-light travel by warping space-time behind, and in front of, a spaceship, and then riding the wave of that warped space-time in the fashion of a surfer being pushed much faster than the individual water molecules in a wave are traveling.

For those of you who know your physics, you're probably saying, "But wait... what about general relativity?"  Apparently, since within the (warped) space-time of the region around the spacecraft itself, no one is exceeding the cosmic speed limit of 300 million meters/sec (the speed of light in a vacuum), this does not break the rules -- even though Alcubierre thought that it might be possible to travel at speeds which, when viewed from the point of view of someone not on the spaceship, might allow Our Intrepid Crew to reach Alpha Centauri in a few weeks.  (Voyager, one of the fastest manmade vehicles ever constructed, would take 12,000 years to reach Alpha Centauri, if it were heading that direction, which it's not.)

The catch, however (and it's a big one), is that in order to warp space-time to this extent, Alcubierre found that it would take the mass-energy of Jupiter.  Yup -- to do this, you would need half a Jupiter's size chunk of ordinary matter, and an equal-sized chunk of antimatter, and allow them to mutually annihilate.  If you could do that in the right way, you could warp space in this fashion.

That's one hell of a big warp core.  I don't think even Scotty or Geordi LaForge could make that work.

But this hasn't discouraged scientists.  Recently, Harold White of NASA announced that if you took the warp bubble, and made it toroidal instead of flat, and oscillated it, you could achieve the same effect -- and reduce the mass-energy needed to less than 800 kilograms!  [Source]

Right as we speak, White and his team are trying to accomplish the same thing on a tiny scale -- seeing if they can distort space-time in the way Alcubierre predicted, using lasers.  They're looking for a one-part-in-ten-million disturbance.  But if they find it -- it confirms Alcubierre's predictions, and at that point the problem changes from being a theoretical one to being a technological one.

And, if history is any indicator, after that, it will only be a matter of time. 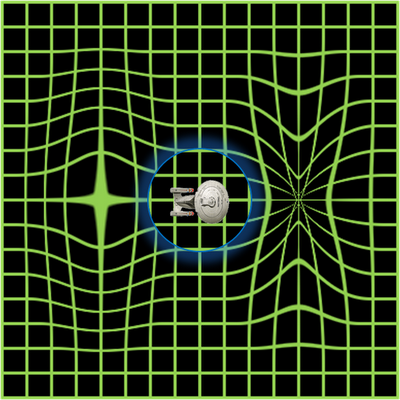 I think this is about the most exciting thing I've read in ages.  Despite the fact that I was a physics major in college, I don't pretend to understand the details of the theory; I very quickly got lost in the abstruse mathematics when I took a look at Alcubierre's paper.  But all I know is, if I could get to the nearest star system  in only a few weeks, I would be elbowing people out of my way to get to the front of the line.  Can you even imagine, landing on a planet orbiting another star?  For real?

Man, I think I just had a nerdgasm, there.

So, if White et al. end up with results, I think we know who our answer to Zefram Cochrane will be.  His name is Miguel Alcubierre, and I think we should make sure that he's the one who gets to shake the Vulcan's hand when they land on the Earth. 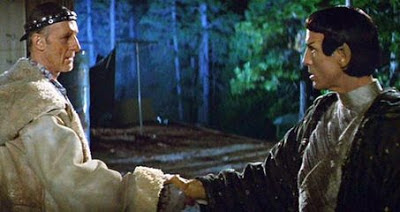