Everyone loves a good correlation.  Our brains are outstanding pattern-finders; we are very good at picking patterns out of the sensory input that bombards us constantly, so good that we sometimes invent patterns where there is nothing there but some random array (numerology and pareidolia are two excellent examples of this).

There's a second problem, though, and that is that although our brains are pretty good at finding patterns, they're not nearly as good at determining what those patterns mean.  Presented with a correlation, we're quick to assume that there's a causation present -- especially if the relationship seems to support something we already thought was true.

Take, for example, the following table, that has been making the rounds of liberal websites this week: 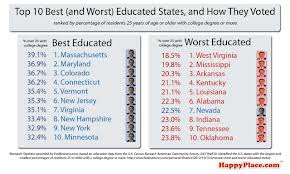 The statistics given -- the percent of adults 25 years or older who have a college degree -- correlates strongly with which of the two presidential candidates the state went for.  The states with the highest percentage of college graduates went for Obama; the ones with the lowest went for Romney.  And of course, the crowing on the liberal websites was loud and long, and mostly to the effect of "Ha!  We're smarter!  We knew it!"

The problem is, is this really what this table shows?  What we have here is a correlation; that Democrats actually are smarter, or that being smarter caused you to vote Democrat, very much remains to be seen.  I can think of three other explanations for the data without even trying hard.  (1) A college education is also correlated to having a higher-paying, more stable job; the message about Obama being weak on jobs resonated more with the people with fewer marketable credentials.  (2)  The lack of diplomas from colleges, and tendency to vote Republican, in the right hand list are both caused by a second factor; a higher adherence to evangelical religion in those states.  (3) Going to college brainwashes you into becoming a Democrat; colleges are frequently accused of being hotbeds of liberalism.

Which is it?  Or is it something different still?  I think you can see that establishing what caused the pattern is a lot harder than seeing the pattern in the first place.  But when someone finds a pattern that seems to suggest something we already believed, it's easier just to jump to a causation when one has yet to be established.  (Especially when the conclusion is, "Boy, aren't we smart?"  Psychological studies have been done that have shown that nearly everyone thinks (s)he is above average in intelligence, something that has been nicknamed the Lake Wobegon Effect.)

Now, to be sure, patterns like this certainly do demand an explanation; saying "correlation does not imply causation" and then forthwith giving up thinking is lazy.  Something is going on here that needs explaining.  And as Daniel Engber, in his wonderful piece "The Internet Blowhard's Favorite Phrase," put it, "Correlation does not imply causation, but it sure as hell provides a hint."  Whatever the reason behind the pattern in the table -- whether it is true that Democrats, on average, are smarter than Republicans, or one of my three alternate explanations is correct, or that some combination of those reasons is responsible, or that it is caused by something else entirely -- it certainly is a question that should be of interest to sociologists and political scientists.  What it is not is a reason for the liberals to go "Woo hoo!" and then stop thinking.

Because, of course, that one is not the only correlation that is out there.  How about this one, that made the rounds after the 2008 election: 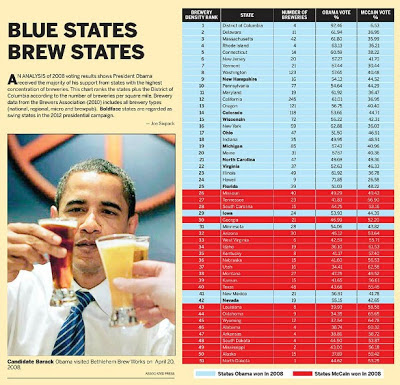 Yes, the red state/blue state split correlates almost perfectly with another statistic, the number of breweries per capita.  I can see it now -- conservatives claiming that the election was invalid, that people who voted for Obama in the blue states actually meant to vote for Romney but screwed up their ballots because they were drunk.
Posted by Gordon Bonnet at 2:35 AM