Microchips, Obamacare, and the Mark of the Beast

Well, another election season is over, and Barack Obama has been given another four years to enact his vision of where the United States should head.  He won't have much time to rest on his laurels -- he's got a lot of work to do if he's going to achieve his chief goals, including creating one million new manufacturing jobs, recruiting 100,000 new science and math teachers, reducing oil imports by half, reducing the deficit, ending US involvement in Afghanistan, and implanting the Mark of the Beast on every American citizen so that he can initiate the End Times as predicted in biblical prophecy.

Well, okay, the last one isn't one of his stated goals, per se.  But you'd think it was, to listen to Paul Begley, the evangelical preacher who in a video clip entitled "Americans!  Prepare to Be Microchipped!" claims that there is a provision in Obamacare to implant RFID chips in everyone, and that corresponds to the Mark of the Beast described in Revelation 13:16-18: "And he causeth all, both small and great, rich and poor, free and bond, to receive a mark in their right hand, or in their foreheads: And that no man might buy or sell, save he that had the mark, or the name of the beast, or the number of his name.  Here is wisdom.  Let him that hath understanding count the number of the beast: for it is the number of a man; and his number is Six hundred threescore and six."

The fact is, Obamacare contains no such provision; there is a provision to microchip pacemakers and other implantable medical devices, so that a patient's medical information could be quickly accessible via a scan if the device fails.  But Begley says that no, this isn't all, that this is just a smokescreen for the actual intent of the bill, which is to tag everyone in the US, and ultimately, everyone in the world.

The whole "Mark of the Beast" thing is mighty popular with evangelicals.  It's been discussed by biblical literalists for decades, resulting in speculation that it corresponds to credit card numbers, Social Security numbers, driver's license numbers, GPS tags in cellphones, UPC codes on items in stores, scannable chips in passports, and a variety of other things.  And once they get the wind up about this stuff, they tend to get awfully suspicious.  One guy I know seriously believes that the DMV is using a microchip implanted in your driver's license to follow your every move, as if (1) they had the staff and technology actually to accomplish this for every person in the US who has a driver's license, (2) the workers in the DMV actually cared where you are on a minute-to-minute basis,  and (3) they didn't have better things to do, such as attending surliness training seminars and taking important coffee breaks when the line for license renewal gets too long.

In any case, the key point, to evangelicals, is that some person will end up getting the number "666" as his/her Mark, and that person will be the Antichrist, or the Beast with Seven Horns, or the Scarlet Whore of Babylon, or possibly all three at the same time.  It's hard to be sure, frankly.  I've read the Book of Revelation more than once, and my general impression is that it sounds like the result of a bad acid trip, so I'm not entirely certain I understand the finer details.  Be that as it may, the evangelicals take the whole 666 thing pretty seriously, to the point where a worker in Georgia last year refused to wear a badge for a day that said "666 days without an accident" for fear that he would be nabbed instantaneously by Satan and dragged off to hell.  (He was fired, sued the company, and was then rehired with back pay.)

Paul Begley, though, thinks he has the whole thing figured out, and that the End Times will start in March 2013 with Obamacare mandating chip implantation in everyone.  (If you looked at the link, note the highly alarming picture of someone using a barcode reader on a blank-eyed guy's forehead.  If that doesn't convince you... well, don't make me use the word "sheeple" in your general direction.)

So, anyhow.  I hope all of you people who voted for Obama knew what you were getting into.  If you don't, you'll figure out all too soon -- March 2013 is right around the corner.  That is, of course, provided we survive the Mayan Apocalypse on December 21, 2012, an event I am positively looking forward to.  (I'm thinking of getting a shirt to wear on December 21 that says, "The Mayans Had An Apocalypse, And All I Got Was This Lousy T-Shirt.")  So I guess this gives us something to look forward to after the Apocalypse is over -- at least those of us who aren't eaten by zombies, or whatever other special offers the Mayans have in mind.  Me, I'm already considering my strategy, and I think I have a good one, which I have outlined below. 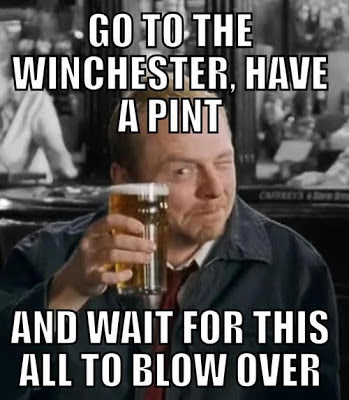 Posted by Gordon Bonnet at 2:42 AM