Zealotry, belief, and the desecration of Serpent Mound

Zealot (n.) - A person who is fanatical and uncompromising in pursuit of their religious, political, or other ideals.

There's something frightening about zealots, isn't there?  They are quite content to flout laws, ignore social conventions, and run right over anyone who opposes them (sometimes literally) in order to achieve their goals.  In my experience -- and I've known a number of people I would describe with this term -- they are also damn near impossible to talk to.  Once you start out from the position, "I am right, and nothing anyone could say will convince me," your conviction becomes an unassailable, and rather dangerous, fortress.

People usually think of zealotry as being the bailiwick of the more extreme factions of the majority religions.  You hear a lot about zealots amongst the evangelical Christians and the fundamentalist Muslims, for example.  But zealotry is no respecter of belief system; any faith-based framework can lead you there, as long as you end up espousing it with sufficient fervor.  One of the most decided zealots I've ever met chose to express that tendency via PETA (People for the Ethical Treatment of Animals).  Don't think this could possibly represent zealotry?  This woman once said, in my presence, "All life is equivalent.  If I was faced with the choice of killing one human life to save the lives of ten non-human animals, I would do it without hesitation."  And yes, that includes mice.  Or worms.  Or bugs.

Zealotry, therefore, entails a kind of blindness.  Whatever you do, you do with a set of self-justifying rationalizations, that it's what god, or the gods, or the angels, or a Higher Purpose, demands that you do.  Any argument to the contrary is simply ignored into non-existence.

Which brings us to the damage done by vandals to the Serpent Mound, an ancient Native American site in Ohio.

Serpent Mound is a low, undulating rise 420 meters long, that archaeologists believe was created by a people called the "Fort Ancient" culture about a thousand years ago.  It is thought to have served some sort of dual devotional and astronomical purpose, although its significance to the culture which created it is still uncertain.  The land on which it stands was donated to the Ohio State Archaeological and Historical Society in 1900, and it was designated a National Historical Landmark in 1964. 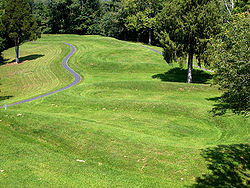 And now, a bunch of people calling themselves "Light Warriors" spent an evening running around on Serpent Mound, digging holes in it to plant "orgonites" in it so that they can "realign its energy" and "lift the vibration of the Earth so that we can all rise together."  [Source]

What is an "orgonite," you might ask?  It's a bunch of quartz crystals, feathers, and metal filings, embedded in a blob of resin (usually made by baking it all in a muffin tin).  Orgonites, believers claim, rid a place of "negative energy" and "create positive energy frequencies."

The ones who are responsible for this act -- a bunch of wingnuts called "Unite the Collective" -- are proud of what they did.  They are, they claim, "Galactic Light Beings" who are only doing what is necessary to make the Earth experience "ascendancy."  (If you have the time, look around on their website.  It is that strange mixture of woo-woo wackiness and absolute conviction that I find simultaneously funny and very, very scary.)

Fortunately, officials in Ohio are not impressed by Unite the Collective's claims that what they did is not only right, but necessary.  Volunteers are helping Ohio Historical Society members to locate and remove the Energy Muffins from Serpent Mound, and charges are expected to be filed this week which (if successful) would result in 90 days in jail for the perpetrators and a $5,000 fine.

What freaks me out about this is not that a beautiful, historically significant place was vandalized; this is (sadly) not the first time such a thing has happened, nor will it be the last.  What gives me the shudders is the complete certainty these people have that their bizarre worldview is correct, and their willingness to act on it.  It was just this attitude that led fundamentalist Muslims to destroy the Bamiyan Buddhas in Afghanistan and historical sites in Mali; it is what led to the burning of the texts in the Great Library of Alexandria; it is what led Christian missionaries to destroy the quipus, the ancient "talking knots" of the Incas, of which few remain intact.

I have high hopes that law enforcement will catch up with the self-styled "Light Warriors" who desecrated Serpent Mound, but I am less sanguine about the possibility of eradicating the self-righteous zealotry they represent.  Whether it is expressed through politics, mainstream religion, or a fringe group like "Unite the Collective," the tendency toward zealotry is scarily common amongst humans -- and amazingly difficult to predict, control, or correct.
Posted by Gordon Bonnet at 2:35 AM