The fire-breathing vegetarian velociraptor of doom

I am frequently impressed by the tortuous, knotted rationalizations some people will invoke in order to explain their favorite weird, counterfactual idea.  The funny thing is, they often couple this with a sneering derision of people who disagree with them -- and in fact, frequently accuse their detractors of engaging in rationalization themselves, of accepting ideas without evidence, of believing in "fairy tales."

You have to be impressed with a blind spot that huge.

I ran into a stunning example of this just yesterday, when a student said to me, "Did you know that some biblical literalists believe that dinosaurs could breathe fire, and that's why fire-breathing dragons are part of mythology?"  I scoffed at first, but he directed me to this site, a page from the Creation Worldview Ministries website.

If you are understandably reluctant to go there and read it for yourself, allow me to summarize their argument here.  I am not, for the record, making any of this up.

1)  Evolution is a big fat fairy tale, for which there is no evidence.  Evolutionary biologists like myself are being deluded by Satan and are lying to you, with the goal of stealing your children from the church.

2)  Fire-breathing dragons were mentioned in the bible, so they must have been real.  They cite Job 41:15, 18-21:  "His strong scales are his pride, shut up as with a tight seal... His sneezes flash forth light, and his eyes are like the eyelids of the morning.  Out of his mouth go burning torches; sparks of fire leap forth.  Out of his nostrils smoke goes forth, as from a boiling pot and burning rushes.  His breath kindles coals, and a flame goes forth from his mouth."

3)  Okay, now that we've established that fire-breathing dragons are real, what are they?  Well, we have dinosaur bones, which are kinda dragon-like, so those must be our Smaug wannabees.  Especially, the site says, the duckbilled dinosaurs, which had "very large nasal cavities, much larger than needed for smell."  Obviously, big noses = breathing fire, which is going to make me a hell of a lot more careful the next time I sneeze.

4)  All animals, including dinosaurs, were originally vegetarians.  Animals only started to eat each other after the Fall.   The big, nasty, pointy teeth of the Velociraptor, for example, were used for munching on especially tough carrots.

5)  Many herbivores have fermentation chambers in their digestive tracts, and fermentation of plant materials can produce methane.  This is why, for example, cow farts are flammable.  You are cautioned on the website that it isn't nice to light cow farts "because it will scare the poor cow half to death."

6)  Along the way, the website points out as an aside that global warming is a myth, and that anyone who believes in it is an "environmental terrorist."

7)  So anyway, dinosaurs may have burped methane gas.  If you couple this with a mechanism for igniting the gas, you get an instant T-Rex flamethrower.

8)  But what could ignite the gas?  There are three ways:  the dinosaurs' teeth could have clicked together and created a spark, "like a flintlock rifle;" they could have had an electrical ignition system in their throats; or they could have a chemical ignition process, similar to the one that "makes fireflies light up the night skies."

Ergo: fire-breathing dragons are real.  This, in fact, explains the story of St. George and the Dragon, wherein a Christian man (emphasis theirs) rescues a fair maiden from one.  "What better way," the writers of the website ask, "to impress a woman of your courage and strength than to slay a fierce dragon on her behalf?"  They then go on to say that the dinosaurs may have become extinct because of overhunting, possibly by desperate men trying to impress their girlfriends, a motivation that continues lo unto this very day.


Well.  First of all, I have to say that my overall reaction to this is:

I can't get out of my mind the strangely compelling mental image of Bessie the Dairy Cow clicking her teeth together, and suddenly spouting flame from her mouth and nose.  Being that I live across the road from a farm, I must say that if this were true, I would be very much in favor of it just from the entertainment value alone.

But anyway, let me get this straight.  You say that (1) evolution is a "fairy tale," and (2) global warming is a "myth," but you do believe in fire-breathing dragons?  Really?  Really?

I have to admire these people, in one sense; at least they play fair.  They're starting from the standpoint that every last word in the bible is the literal truth, even the bizarre, self-contradictory, or inconvenient bits (of which there are lots).  They don't shy away from the wacky parts, like some biblical apologists do.  But if you're going to do that, you have to come up with some twisted logic to get it all to work out, don't you?

In any case, I would like to thank Creation Worldview Ministries for starting out my day with a good belly laugh.  I guess it's only fair to admit that they'd probably find my views equally ridiculous, although they're unlikely ever to come across them (I'm doubtful that these people frequent skeptic websites).  In any case, let's end with a photograph of how one of my personal heroes dealt with a fire-breathing dragon, when he ran into one: 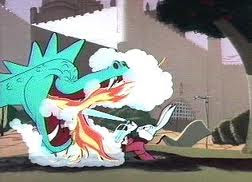 So, there you are.  Source corroboration.  The Book of Job, and Bugs Bunny.  Independent sources, and of equal credibility.  I believe this is what we in the scientific world call "an airtight case."
Posted by Gordon Bonnet at 2:45 AM